“was grocery shopping and celebrating his wife’s birthday in Chicago” 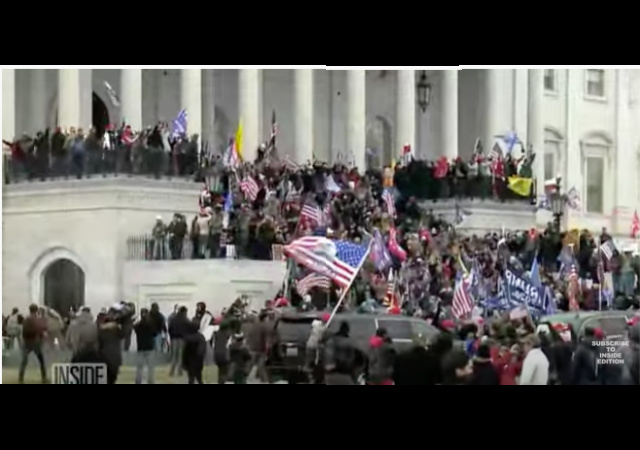 A retired firefighter in Chicago named David Quintavalle, who wasn’t even in Washington, DC on the day of the unrest at the Capitol, was accused of murder during the incident by people fanning the flames on social media.

Quintavalle doesn’t use social media and heard about the accusation from a friend.

David Quintavalle didn’t do it.

The retired Chicago firefighter from Mount Greenwood — whom social media trolls called a “terrorist” and accused of fatally wielding a fire extinguisher that killed a cop as a mob of Trump-supporting insurrectionists stormed the U.S. Capitol on Jan. 6 — was grocery shopping and celebrating his wife’s birthday in Chicago, Patch has learned.

Twitter exploded with unsubstantiated claims Tuesday that Quintavalle — who retired from the fire department in 2016 after 32 years — was the bearded “#extinguisherman” in a surveillance video wearing a “CFD” stocking cap wanted for questioning and “soon to be arrested” by the FBI regarding the fatal beating of U.S. Capitol Police officer Brian Sicknick.

Quintavalle, who shaved his beard before Christmas, told Patch that he wasn’t in Washington, D.C., last week. He went grocery shopping at Aldi at 9 a.m. and made a home-cooked supper of filet mignon and lobster to celebrate his wife’s birthday with their Chicago police officer son on the day rioters breached the Capitol.

This completely innocent man has become the target of a virtual lynch mob:

By Tuesday night, Quintavalle began getting angry calls from people saying he’s a “f—— murderer” who belongs in jail. TV news reporters had staked out his house. Chicago police dispatched a patrol car to keep watch overnight, as well, his lawyer said.

“THIS STORY HAS FUCKED UP MY LIFE”:

On the day of the riot, retired Chicago firefighter David Quintavalle was 600 miles away, celebrating his wife’s birthday.

But Twitter posts falsely identified him as a rioter involved in the killing of Brian Sitnick. https://t.co/QGxTFTCmXj

Where are the gatekeepers of social media, who are supposedly trying to stop misinformation and the incitement of violence?

Google, Amazon, and Apple have sent warnings to Twitter over this incitement to haaaa just kidding of course they didn't. https://t.co/Y2WTYbyWpt

If Twitter was actually interested in "trust and safety" they'd also ban every last one of the hundreds of accounts who amplified this complete bullshit.https://t.co/kz8Of36qYc

The Philadelphia Inquirer is now reporting that authorities arrested the man in the photo:

Retired Delco firefighter accused of injuring officers and a Del. man who paraded a Confederate flag are charged in the Capitol riot

A recently retired Delaware County firefighter accused of lobbing a fire extinguisher at police and a father-and-son duo from Delaware caught on camera smashing windows and parading a Confederate flag through the Capitol surrendered to federal authorities Thursday to face charges tied to the Jan. 6 insurrectionist riot in Washington.

Prosecutors said Robert Sanford, a 26-year veteran of the Chester Fire Department who left the force in February, injured three people when he tossed the extinguisher at the head of an officer as part of a mob that broke through barricades on the Capitol’s west side. They noted that the incident was separate from a similar attack on Capital Police Officer Brian Sicknick, who was bludgeoned with a fire extinguisher by another assailant that same day and later died from his injuries.

At the time of this writing, there are still live posts on Twitter misidentifying David Quintavalle as the suspect: 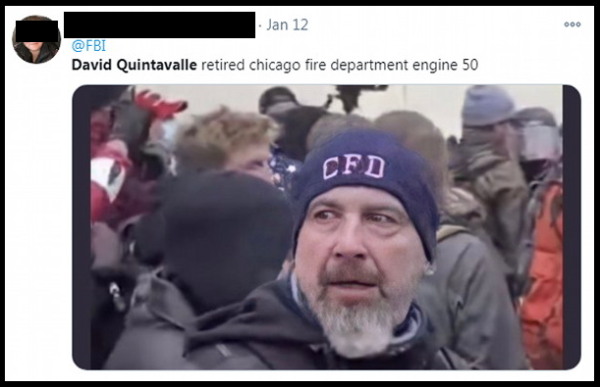 Possible defamation suite if plaintiff can find anyone worth soaking.

Did any of the usual media suspects publish this, if they did, deep pockets.

A personal cancellation vendetta? It’s not novel, but, unfortunately, a progressive condition.

That what Thugvon and Michal Brown were trying to do, physical cancelation.

Real Question: How would things be different if DC was under Marshall Law? Troops on the street?Lockdowns? Curfews?

Welcome to the age of facts not mattering. Remember when jug ears said there are 2 sets of facts?? This is what he was talking about.

Let’s get back on track, shall we?

Pelosi’s entire family has generational corruption, tied to 4 families that have run CA for 80+ years like Game of Thrones:

The track, in this case, is people being falsely accused through social media and other means Stay on track, indeed!

“… to face charges tied to the Jan. 6 insurrectionist riot in Washington.”

Like the Russia hoax, the Joseph Goebbels is all in on the Insurrection hoax.

Sounds like we need to start a campaign to have Twitter ban everyone who falsely accused this guy.

Keep making noise and suck up all their bandwidth until they do it.

That’s not how it works in this brave new world of tech tyranny. We can kick up a fuss until all the cows come home, grab a bite to eat, and nestle in for the night . . . Twitter has already effectively silenced the majority of conservative voices on its platform via shadowbanning and otherwise limiting distribution of their tweets and has shown time and again that they simply don’t care what we think.

The only reason they weren’t more bold in their suppression of wrong think before is that the Senate was in Repubican hands and was calling them up to the Hill quite regularly for hearings and Trump was in the White House waving his pen and phone. Those days are over.

Agreed. I would have thought the transition to Soviet/China style surveillance and agitprop, fueled by an infantile, hysterical mob would have happened more slowly, say by the 2022 “elections.”

May antitrust lawsuits rain on Big Tech to put Taiwan in April to shame.

Learn from Parlor’s mistakes. Multiple vendors, multiple connections to the web, multiple ways to access the network (that way if the app disappears, there’s a web interface, there’s an open source interface that allows multiple apps to be created, etc.) The people who can dox conservatives can be doxed by conservatives. Expecting the other side to play fair is expecting too much. Complaining they don’t play fair won’t fix it.

Judging by the drop in their market cap, it is not impossible too make Twitter the next MySpace.

You wrote: “Judging by the drop in their market cap, it is not impossible too make Twitter the next MySpace.”

So funny, I was just using MySpace as an example in a discussion about Big Tech tyranny’s soft spot.

Maybe Microsoft will fit Clippy with a method to connect to Twitter.

(I just brought up my space.com. Dear me! It still exists! At least on their mobile site, all I see are pictures of celebrities of some sort, doing things. Most of whom, I’ve never even heard of. From the looks of them, I don’t want to. )

Shouldn’t bother asking- the answer is no.

Actually, given the current actions of twitter, with regard to its deplatforming people for posting false informational messages, they have assume responsibility for the content posted on their site. They are no longer acting as a 230 entity. If the firefighter suffers any harm, from these posts, then Twitter may well be liable.

Not true. They are still acting exactly as § 230 envisaged; allowing content to be posted without their seeing or approving it, but going around after the event deleting whatever offensive content comes to their attention.