“Not so long ago, publishing professionals would have been horrified to be accused of it [blacklisting]. Today they compete to see who can proclaim his blacklist with the fiercest invective.” 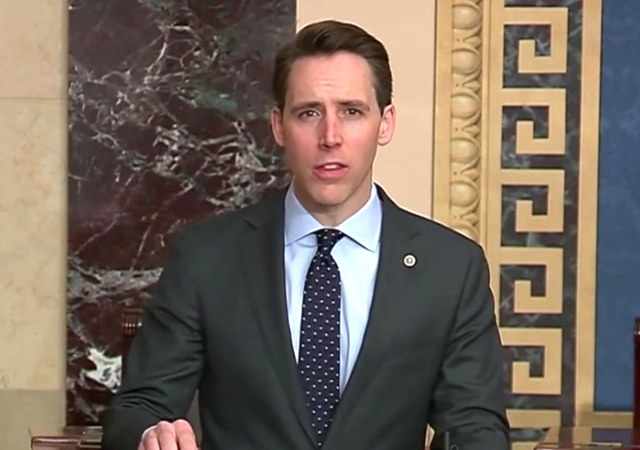 Simon and Schuster dropped Hawley on January 7th, the day after he voted not to certify the 2020 presidential election and the Capitol Hill riots.

Criticism against Hawley started to mount in December when he said he would not certify President-elect Joe Biden’s victory over President Donald Trump.

But it seems the Capitol Hill riot forced Simon and Schuster’s hand more than the vote:

“We did not come to this decision lightly,” Simon & Schuster said in a statement. “As a publisher it will always be our mission to amplify a variety of voices and viewpoints: At the same time we take seriously our larger public responsibility as citizens, and cannot support Senator Hawley after his role in what became a dangerous threat.”

My statement on the woke mob at @simonschuster pic.twitter.com/pDxtZvz5J0

Hawley argues in The Tyranny of Big Tech that companies like Apple and Google are the “gravest threat to American liberty since the monopolies of the Gilded Age.”

The media immediately called Spence and asked if he would publish Hawley’s book or if he would ever consider not publishing an author.

Spence considered it a weird question and spat out some hard truths for the readers:

Readiness to silence someone because of who he is or whom he associates with is often called the “cancel culture,” but I prefer an older term—blacklisting—whose historical associations expose the ugliness of what is going on. Not so long ago, publishing professionals would have been horrified to be accused of it. Today they compete to see who can proclaim his blacklist with the fiercest invective.

On Jan. 6, Sen. Josh Hawley of Missouri invoked his legal right to object to Congress’s certification of electoral votes. Reasonable people can disagree whether his act was noble or cynical, courageous or rash, but no one can reasonably argue that he intended to incite that afternoon’s invasion of the Capitol by a lawless mob. He immediately and forcefully condemned the attack. But the next day Simon & Schuster canceled his forthcoming book, “The Tyranny of Big Tech,” citing the senator’s “role in what became a dangerous threat.”

I started getting calls from reporters in effect daring me not to join the blacklisters and from publishers, editors and agents who wondered when and how the mob would come for them.

Spence did not explain how or when the agreement took place to publish Hawley’s book.

Spence admitted that independent publishing companies like Regnery Publishing are “vulnerable to today’s Jacobins in many ways, for it relies on large partners to print, distribute and sell its books.”

Instead of dissenting like regular adults and describing it as “violence and treason,” Spence and other small companies know they “could be next,” but “choose to fight back.”

Spence also railed against the “No Book Deals for Traitors” statement from 250 “publishing professionals.” Those book deals include anyone in Trump’s administration:

The statement of the 250 “publishing professionals” shows that today’s censors recognize no limits. I appeal to the real professionals of publishing, some of whom may be the bosses and mentors of those who signed that mindless rant: Remember that you are Americans. Americans argue, write, preach, campaign and vote. They don’t blacklist.

Add Simon & Schuster to the boycott list. But do keep one.

I have a new rule. I will no longer read any article that begins by referring to the “Capitol Hill riot”. We get enough disinformation from the left.

Can Regency sell books through Amazon? If they can today, will they be able to do so next month?

Regnery, not Regency, apologies for the auto-correct.

YEP AND IF I’M NOT MISTAKEN REGNERY MADE A FORTUNE PUBLISHING ALL OF ANN COULTER’S 12 BEST SELLERS WHEN EVERY OTHER PUBLISHER WAS TOO STUPID TO MAKE THE MONEY….WHAT A COLLECTION OF STOOGES EH?

They should boycott the books availability via Amazon. Plenty of independent outlets still in existence–let them make a killing.

Anyway, can I pre-order now?

I don’t know of any nation which has made such a mad dash to ignorance. Certain words can’t be used because persons might be offended. Certain literature can not be read because they contain forbidden ideas. Certain speech is not permitted because _________ (fill in the blank).

I come from the school whereby ideas are put forth and they are tried and tested by the people. If proven to be true, they survive. If not, they go by the wayside, at least for the time being. Mostly, there may be some aspect found to stand the test of time while other aspects do not.

Whenever this tried and proven method has been overtaken on the basis of political power, it generally leads to ruin. We can already observe in our society the diminished capacity for debate and dialogue, of a narrowing of educational endeavor, and a shallowness in much thinking.

I dunno. We may be a people wandering in a wilderness for many years …

Take a look are what has been being elected to Congress, ignorance can be fixed, way too many are flat out incapable of learning.

America really needs minimum IQ standards for holding office, it might be a good idea to apply the same standards to being able to vote.

When I think of the issue of ignorance, it’s not just a matter of intellect. It’s ignoring life experience. For example, the over-worked term “free”.
T’aint nothing free. Oh, it might , might, be free to thee but not me because I’m somehow paying the price.

Some where, some how, in some manner “free” is being paid for by someone. I do wonder in what state our nation would be if Congress was populated by butchers, bakers, candlestick makers, and homemakers.

Very kind and thank you.

All I know is that when I was growing up, I could–and did–watch two of the most interesting political/current events shows on the same channel: Firing Line and Tony Brown’s Journal on PBS.

I wasn’t growing up right or left. I was growing up curious and informed by a lot of ideas.

So? Amazon will refuse to sell the book through its platform. The NYT will not review it (unless they do a vile hit piece). Google will suppress it in search results. Twitter will ban any discussion of it.

Sales will be heavily impacted.

Note to self: Buy the thing just to annoy the censors.

I don’t mind if Amazon does not sell the book, because I am no longer doing any business with Amazon.

Same here. I know better places to get the things that I want. And better people to give my money to.

Are you still doing Google searches? Use DuckDuckGo instead.

And, BTW, consider loading the TOR browser and using it if the Thought Police start taking down curious citizens.
.

They act this way to suppress a book called The Tyranny of Big Tech.

Can’t make this stuff up.

Mary: Pretty please could you revise this sentence? I’m struggling to make heads or tails of it with the current phrasing. “Instead of dissenting like regular adults and describing it as “violence and treason,…”

Simon and Schuster won’t publish Hawley’s book but they don’t seem to have any qualms or problems with publishing this kind of dreck. Wonder how accurate it truly is or if it’s just another fluff piece in an attempt to make Harris look like an actual human being.

Which is where he should have taken it in the first place.

I hope he pulls the manuscript and adds a chapter on Simon and Schuster. And I probably won’t read it but I WILL buy it.

Did Hawley get to keep his S&S advance?

I’d keep it. THEY broke the contract.

Is there a way to pre order the book without going through Amazon or somebody like them?

I’m not sure, but I would suggest going to the Regnery website periodically to see when it’s available. I would not, personally, order anything from Amazon (or any site remotely like them).

Simon is owned by a liberal foundation determined to reset the world the way China wants it.

The irony is thick: “The Tyranny of Big Tech”

Big Tech: we’re going to silence you by colluding to black list you and have you declared a traitor.

Yeah, but it’s Regnery, which is not a “respectable” publisher. The elites all look down their noses at Regnery anyway, and at anything it publishes.