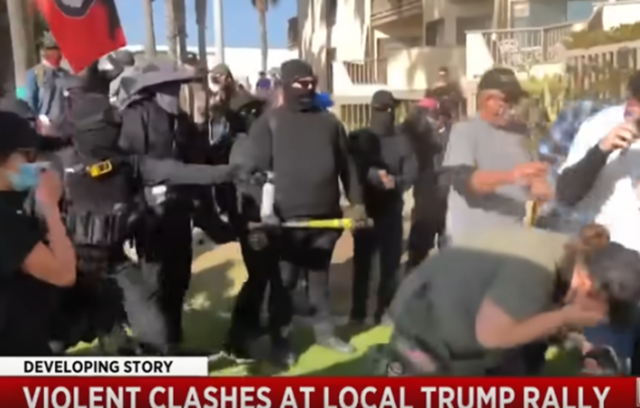 On California’s idyllic Pacific Beach, where I have often taken my boogie board to ride the waves, supporters of President Donald Trump staged a rally this weekend.

They were met by members of the anarchist group Antifa, and as the following video shows, the Trump supporters were attacked with pepper spray.

#breaking trump supporters clash with BLM and antifa on the boardwalk in PB. Heavy police presence some fights and scuffles. Pepper spray etc (not from pd). @fox5sandiego pic.twitter.com/SrMjWnISlZ

Here is how the local press chose to report the event:

Counter-protesters clashed violently with supporters of President Donald Trump at a rally in Pacific Beach Saturday, and police ordered people to leave the area as they tried to maintain order.

The event, described in flyers as a “Patriot March,” took place along Ocean Front Walk and began early Saturday afternoon. A group of counter-demonstrators — some from anti-fascist groups, clad in all black and holding sticks or bats — showed up to face off with the pro-Trump group, and at times the tense exchanges turned violent.

Note that there is no hint that Antifa, the group that has caused chaos and millions of dollars worth of destruction throughout the country, attacked these pro-Trump demonstrators.

"Antifa the idea" was out in broad daylight harassing Trump supporters and innocent bystanders at Pacific Beach on January 9, 2021. KUSI website does not mention the mace and baseball bats used against other San Diego citizens.https://t.co/8bxTo7RwDs

The pro-Trump demonstrators continued, despite the spray:

The protest, which is at Hornblend Street and Mission Boulevard, has prompted SDPD to ask residents to stay away from the area. Officials said “those who remain or return against this lawful order may be cited/arrested and risk exposure to chemical agents & less-lethal force applications.”

Aerial video showed a line of SDPD officers trying to disperse the demonstrators around 3 p.m. Officers were struck with a glass bottle, eggs and rocks, and pepper-spray was shot at them as well, according to San Diego police.

Dozens of patrol cars are parked nearby, and officers in riot gear have formed two lines on Mission Boulevard to separate the two groups, which are now spaced several hundred feet apart. A fire truck and ambulance have also been spotted not far away. The situation is taking place just blocks from the beach, and there are many spectators in the area as well, some of them biking and skateboardng by the unfolding events.

At 3:30 p.m., the situation had the appearance of a standoff, with the two sides rallying in place, with several Trump supporters waving Trump banners. By 5 p.m., SDPD said both groups had seperated and said they would continue to monitor.

The presidency isn’t the only subject of protests in California. Sacramento was the center of a demonstration against the pandemic lockdown, as both the rationale and the consequences of such restrictions are now being questioned.

A small group of lawmakers and demonstrators gathered at the Capitol steps on Saturday to demand that the governor reopen the state after months of COVID-19 health restrictions.

…”We are 70% mom and pop shops,” said San Joaquin Supervisor Tom Patti. “When you shut them down, you are shutting down revenue sources for us.”

“With all the contact tracing, thousands of hours, thousands of calls, not one case was traced back to a hair salon,” Patti said. “Not every single thing can open. Maybe nightclub and bars might not work…we can’t do everything for everybody, but what we can do, we should.”

If California is a leading indicator for the rest of the nation, that brace yourselves for a very bumpy 2021 . . . and one in which we can trust the American press even less than in 2020.

Certainly if the Trump rally folks had used pepper spray we would have known about it. In exquisite detail…

Look at the headline – “Violent Clashes at Trump Rally” instead of ANTIFA Attacks Trump Supporters”.

This is just the beginning. Check out another AntiFa function, reportedly today in NYC:

This is only going to accelerate, folks. The genie is out of the bottle and the Establishment is not doing anything to put it back in.

No one should confuse Antifa or blm as being a private entity – it is an arm of the democrat party, and thus a de facto arm of the government. All that’s missing are badges and guns. That’s coming.

“We never thought that could happen here.” Famous last words.

sort of OT related to capitol protests
man I missed stuff like this other day
https://twitter.com/DMacleoMaine/status/1348383138687410179

Why are LI authors still driving traffic to Twitter? Take a screenshot if it is that important to the story.

Correct, if it comes from twitter I don’t even bother looking.

Parler is down and they need to drive traffic to this site. For the moment, it is a necessary evil…even when Parler is up.

We, the individuals, don’t have to give Twitter our data (because we aren’t the customer, we are the product). However, entities like this one rely on social media for traffic…it’s why the censorship is particularly heinous with its blatant partisanship.

they haven’t purged all 70+ million Trump voters yet. Good luck trying. It’s not going to happen.

All citizens should walk away from Twitter, Facebook, Google, Amazon, Apple, etc. Trump supporters, anyone who values fair elections and unrestricted speech should run way from these companies as fast as possible.

If all Trump supports immediately act, loss of that high a percentage of their customer base would put these companies in crisis. Those companies are counting on most people not reacting.

All of us should be trashing those companies at every opportunity.

Looking forward to watching these companies’ stocks getting hammered tomorrow.

The stock market is not a place for moral righteousness. If these companies can still turn a profit, they’ll be invested in.

Of course, a company that helps overthrow an election can have no scruples about lying to its investors and customers, so expect them to keep reporting profits whether it’s true or not.

“Early in life I have noticed that no event is ever correctly reported in a newspaper, but in Spain, for the first time, I saw newspaper reports which did not bear any relation to the facts, not even the relationship which is implied in an ordinary lie. I saw great battles reported where there had been no fighting, and complete silence where hundreds of men had been killed. I saw troops who had fought bravely denounced as cowards and traitors, and others who had never seen a shot fired hailed as heroes of imaginary victories; and I saw newspapers in London retailing these lies and eager intellectuals building emotional superstructures over events that never happened. I saw, in fact, history being written not in terms of what happened but of what ought to have happened according to various “party lines.”

I like that an Antifa chapter, that is on video attacking people, still has a WordPress site.