“Now, the city has cut ties with Philly Fighting COVID, and prosecutors are looking into the “concerning” allegations.” 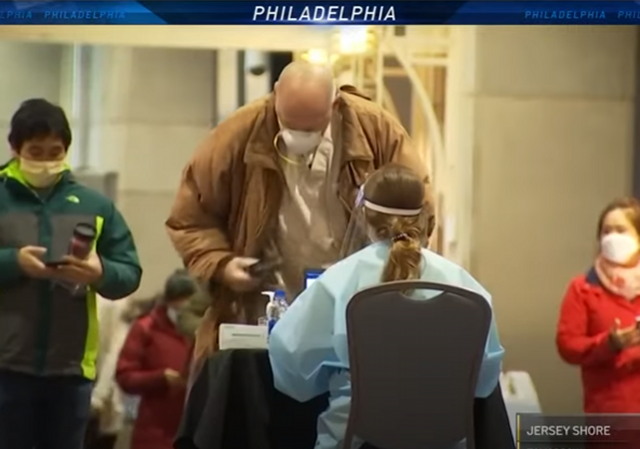 The city of Philadelphia decided to have college students with limited experience administer COVID-19 vaccines for some reason. It did not go well.

Who could have predicted such a thing would happen?

Philadelphia is home to some of the most venerated medical institutions in the country. Yet when it came time to set up the city’s first and largest coronavirus mass vaccination site, officials turned to the start-up Philly Fighting COVID, a self-described “group of college kids” with minimal health-care experience.

Seniors were left in tears after finding that appointments they’d made through a bungled sign-up form wouldn’t be honored. The group switched to a for-profit model without publicizing the change and added a privacy policy that would allow it to sell users’ personal data. One volunteer alleged that the 22-year-old CEO had pocketed vaccine doses. Another described a “free-for-all” where unsupervised 18- and 19-year-olds vaccinated one another and posed for photos.

Now, the city has cut ties with Philly Fighting COVID, and prosecutors are looking into the “concerning” allegations.

The group offered a partial apology Tuesday while defending the switch to for-profit status, and CEO Andrei Doroshin told Philadelphia magazine that claims he had helped himself to leftover vaccine doses were “baseless.”

Here’s a short video report from NBC News in Philadelphia:

Philadelphia Magazine has more on the young man behind this outfit:

Who, Exactly, Is Philly Fighting COVID?

Andrei Doroshin is 22 years old, working toward his degree at Drexel, and a C-suite executive in three different businesses: a real estate firm (CEO), a biotech company (CBO), and, most notably, an organization called Philly Fighting COVID (CEO). That’s the group that had been tapped by health officials to run Philadelphia’s first mass vaccination clinic. But just two and a half weeks after the first clinic went live, the city cut ties with them over concerns about its data privacy policy, its sudden shift to for-profit status, and its failure to maintain testing sites.

Now, Doroshin is facing additional allegations that he took unused vaccine with him after one of his clinics and may have administered vaccines off site. (Doroshin denies doing this.) The entire episode — from the city’s sudden about-face on using Philly Fighting COVID to provide vaccinations to the growing accusations piling up against Doroshin — raises questions about how, especially in a city so vaunted for its supposed “meds and eds” complex, a group of unproven 20-somethings ended up first in line to vaccinate the public during the most important public-health crisis in a generation.

The city people responsible for making this happen should be fired, but probably won’t.

Probably hired them because they were so effective counting ballots.

Printing and harvesting ballots, that’s what they do best.

I am certain Philly Dems pocketed a lot of federal funds given to help administer the vaccines.

With a real federal justice system, a lot of people would be going to prison.

Philly needs to get the folks who were ‘counting’ ballots for Biden. Those guys were organized …

Shit, its Filthadelphia, what can you expect.

If there’s an analogy to Alexandra Cortez running anything, this would be it.

Omar would be more their speed.

Omar is smarter. Which is not saying much.

HIPAA violations? Doubt a waver would protect
Them from the fines for releasing protected health information.

So would it be same to assume that these “college kids” with “minimal health-care experience” were practicing medicine without a license? And therefore should be tracked down and dealt with in an appropriate fashion as anyone else acting in a similar fashion?

Every few months at K-State (much like many universities across the nation), we have a Red Cross blood drive. A huge number of Frats, Sororities, church groups, and various other college-aged kids take on the responsibility of both participating in and directing the complicated setup/procedure/teardown of whole blood donation, which is done by certified nurses, but the kids run the show. It’s how I got started donating many ages ago, and I suspect that the intersection of these kids against the set of Red Cross volunteers is very small, if not a null set.

Sorry George, fat finger fell too far to the right on my little phone. I agree, young people are very capable, it just takes the right ones. This “organizer” seems to any to be a millionaire by 23 and a billionaire by 30.

Leftist kids only know how to hate and destroy – just arrogant, dumb brats like Alexandra Cottez. After their use as street animals, they’re useless – just mouths to feed.

Conservative kids are Nick Sandmans, Ben Shapiros and the like. They can run anything.

Sorry i didnt know you had a crystal ball to determine the political affiliation of the charachters in question.

You’re right. He should described them as brainwashed tools of the leftist academia establishment. Assuming their innate tendencies is unfair.

So you have a crystal ball too. Congrats you’ve proven yourself to be totally judgemental without any evidence. Nice.

in a different post, you were against publicly calling out some progressives for mistakes and incompetence, saying both sides make mistakes.

I asked you to provide websites where you railed against progressives for their failures and unethical behavior.

I don’t believe you ever responded.

You can submit logical (and illogical) arguments here against conservatives, but you never seem to respond this way against the Left.

So again, show us where you pointed out the nefarious and incompetent acts of the Left. You can’t just post against the Right.

With respect to the other comment thread some others responded that pointed out that many sites don’t allow comment. It’s difficult to do a direct comparison of commentary when a) the sites I read have different stories (or don’t overlap) and b) don’t allow comment.

I do rail against many of the positions advocated here, some of those discussions have lead to some revision on my part and others have highlighted a certain tendency for conspiracy theories on here which remain wholely unsupported. If the left are guilty of that then yes I would call them out on that where I can.

As I noted in the aforementioned comment thread, both Slate and Mother Jones do indeed allow comments. So which specific left-leaning sites do you read and have a burning desire to spend hours typing up trollish comments (as you do here) to but that do not allow comments?

I dont read either of those sites very often, I normally frequent Politico, Vox, Washington Post and the New York Times. Occasionally i do comment on those site (that allow comment).

As I have pointed out on a number of occasions having a different view on the subject matter doesn’t make me a Troll.

I’m not really sure what it is you are trying to achieve. It seems to me that you have a ‘burning’ desire to try and somehow prove me to be some kind of troll but my motivation as I’ve said to you before is to engage in a dialogue with those holding different views because I might learn something. In some instances I have so its all good.

Sorry but I disagree as someone who works with college kids on a daily basis.

There are a select few who might do okay, but a blood drive has a blueprint. It has been done many times and the blueprint is pretty easy to follow. This is a very different animal and has new rules and regs. This was an absurd move for something we have precious few of to begin with and those doses have very stringent storage and handling requirements. It would not surprise me at all to find out that some of the administered vaccines don’t work because the “responsible party” did not handle them properly.

In PA, either a regular nurse’s, or a specialized pharmacist’s license would possibly suffice.

I can hear it now: “C’mon, man! They’re just college kids ‘trying to make a difference’!”

No chance in hell (i) the kids will be prosecuted or (ii) the simpleton who approved this program will be fired.

I was going to make a disparaging remark about the guy Dick Ravine (or whatever his name is) with the Bozo hairdo, who was picked to be on Xiden’s “transition team” of all things. But I realized that could get me jailed, or sent in a cattle car to a reeducation camp and then … the showers.

Ah Pennsylvania, the Keystone Cops state, I gotta love ya! Life was simpler back when we had Mayor Wilson Goode and the Philthadelphia Airforce dropping incendiary devices on the Move HQs and destroyed 61 homes in the process.

The more things change the more they … get ever so crazier. Unbelievable? Na!

“I was going to make a disparaging remark about the guy Dick Ravine (or whatever his name is) with the Bozo hairdo, who was picked to be on Xiden’s “transition team” of all things. But I realized that could get me jailed, or sent in a cattle car to a reeducation camp…”

I do not think posting anything anywhere will be a prerequisite for the great roundup.

Andrei Doroshin is 22 years old, working toward his degree at Drexel, and a C-suite executive in three different businesses
I have to wonder if he isn’t a “trust fund” student.

Like Philadelphians, who are also (big-city-controlling, Democrat machine) Pennsylvanians, might delude themselves into believing that this wouldn’t happen — a rigged election so that Dems win, sure, “but our healthcare”? they might scream, shocked and incredulous.

Now you get how today’s version, vs the original, 17th-century one, of Quaker Penn’s bona fide Brotherly Love, is working out for you.

a self-described “group of college kids” with minimal health-care experience.

If you like the professionalism of “Philly Fighting COVID,” you’ll love the “gun safety” qualifications of “Moms Demand Action for Gun Sense in America.”

This was the talk subject on Philly talk radio yesterday, mostly wondered where money came into it, doubt it was done just to pass out to friends all in the no danger zone.

this wasn’t about whether “college kids” could fulfill the Philly Fighting Covid ruse–it was about whether the populace would go along, a trial run

What’s the problem?! They learned their math and reasoning skills through Common Core!

Once again proof that the most terrifying words to hear are “Hi, we’re the government, and we’re here to help…”

The clueless leading the blind… And folks are surprised of the results?!

So, they got a Contract as a non-profit and then; unilaterally changed the Contract to a profit model. How smart!

Who gave them the contract?? Must have been the same people that ran the election. How about pictures of the perps??