“his family is fearful because of the backlash from the district’s statement that he says incorrectly connected him with the violent uprising at the U.S. Capitol” 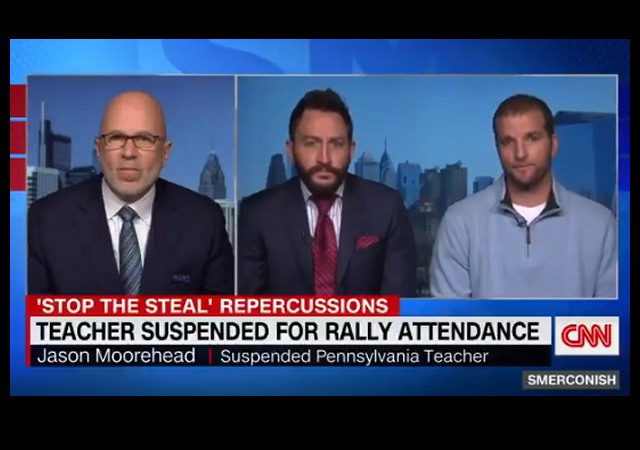 Jason Moorehead, a teacher in Allentown, PA, for 17 years, attended the Trump rally in DC on January 6th. Although he did not participate in the Capitol Hill riots, he claims he was smeared by association and suspended from his job.

He has also been doxxed, and now his family is living in fear.

‘My reputation and character have been destroyed’: Allentown School District teacher suspended for attending protests says lawsuit is inevitable

The attorney for an Allentown School District teacher suspended after school officials learned he’d been in Washington, D.C., for the Jan. 6 protests said the district’s failure to correct a false statement in its news release means a lawsuit is all but inevitable.

Jason Moorehead said Saturday his reputation has been destroyed and his family is fearful because of the backlash from the district’s statement that he says incorrectly connected him with the violent uprising at the U.S. Capitol. Moorehead said that while he attended a rally for then-President Donald Trump in Washington that day, he was never closer than a mile from the Capitol building.

He said the false association with the deadly storming of the Capitol has forced him to delete his social media accounts, avoid answering the phone and keep curtains drawn at his house. He said his address and phone number have been posted online.

The notoriety has also cost him the trust and respect of students. Moorehead said teaching in the school district is the only job he has ever had, and he considers himself more than a teacher, leading clubs and coaching sports.

Moorehead posted a picture of himself wearing a “Make America Great Again” hat and carrying a Revolutionary War flag on Facebook with the caption “Doing my civic duty.” He also shared a tweet by someone else that said, “Don’t worry everyone the capitol is insured,” to which Moorehead added “This.”

Lehigh Valley News has a statement from a local official:

District’s Solicitor John Freund on Saturday told lehighvalleylive.com: “As previously stated the teacher has been temporarily reassigned while the district investigates the facts of his involvement in the January 6 the incident in Washington. A temporary reassignment away from teaching duties while the district investigates the underlying facts is standard procedure with any teacher whose conduct is under question. The teacher has not lost any pay or benefits. When the investigation is complete a decision will be made concerning his return to the classroom.”

Moorehead and his attorney appeared on the Michael Smerconish show this weekend. Watch the segment below:

Teacher Jason Moorehead was temporarily suspended while his school district says it is investigating his actions in DC on Jan. 6.
“I was there just observing firsthand to be a witness to a historic day and never was anywhere within a mile of the riot,” he tells @smerconish. pic.twitter.com/XsPB0zCJGx

You’ll notice that he went out of his way to say that his comment about the Capitol being insured was not intended to be a mockery of Black Lives Matter or Antifa.

This left me with one question. So what if it was? Are we not allowed to mock Black Lives Matter or Antifa? The left mocks conservatives ruthlessly. Every single late-night show is now based on mocking conservatives.

In terms of what’s happening with his school, Moorehead is right to fight this legally. Cancel culture will continue for as long as people allow it to continue.

I hope the guy takes legal action against the school district and the person/people who doxxed him. This crap has to stop.

Who would have thought that we would live in such an intolerant world. It’s mind boggling.

Heard him and his lawyer on Dom Diordano 1210am Philadelphia today. He stated he was no closer that 1 mile of the Capital.
He is getting death threats and they played one of them left on his phone.

how did they get his number?

Capitol. He was in the capital.

But it would make no difference if he had marched to the Capitol, so long as he didn’t illegally enter it. Marching to the Capitol is a long-established tradition, and 100% constitutionally protected.

And even if he had done so, the district would have to prove that it would have done the same to a teacher accused of trespassing on anyone’s private property.

On the other hand, the district’s defense is simply that “we didn’t do anything to him. He’s still being paid and has all his benefits, and if we decide he did nothing wrong he’ll be back in the classroom, so what’s he suing for? All this horrible stuff that other people are doing is not our fault.”

Yet the teacher that flew to FL to have sex with kids is still employed.

Use to listen to Smerconish ( also on 1210am)until the day he said he was voting for Barack in 2008 and dropped him like a hot potato.

Listened to him as he literally fell in love with Obama over the air. Swooning and giggling like a school girl,mI couldn’t turn away from the slow motion train wreck.

Freedom of association? Lefties are very comfortable in their smug safety. It may be necessary to begin making them uncomfortable. If they can reach out and touch us at will, they should expect the same or else this doesn’t end.

We have seen this before. People set themselves up as authorities, point the finger, and yell, “you’re a communist!” The result: lost jobs and worse.

I think Dick Morris has them pegged: “Democrats are the most vicious winners there are.”

Why is that? Is it because they really did lose, and they know it full well?

The left is full of nasty human beings. They aren’t nice in power no matter how they acquire it.

Yet here it’s communists that are calling the people communists.

Huh? I don’t know what you mean.
I know they smear them as “Russian assets,” but the Russians haven’t been communists for years.

Was this meant in jest?

Russia may no longer be an official Communist country (in fact, it was always unofficial as they styled themselves as Union of Soviet Socialist Republics) but the country is run by an ex-KGB agent in Putin.

If you don’t think Russian Communism influences their current political landscape and personal welfare then you have lived with your head in the sand for far too long.

The reason current liberal “socialist democrats” don’t like the old socialists is because they are a reminder of what socialism devolves into…a totalitarian oligarchy, which our current momentum is headed towards.

If our socialist devotees in this country can vehemently oppose the old guard, then they can vigorously claim to not be like them and pinky promise to never let their overreach turn into that (in spite of the logical, historical trends that have repeatedly said otherwise)

Fun fact there is such a thing as a socialist democratic party ie a moderate party that has some of the values associated with socialism . Here’s the important part they have done pretty well and without reference to extreme positions taken by revolutionary socialist movements. The example you cite was born out of violent revolution so kinda expected to be extreme dont you think.

As for Putin i think its doubtful he is ideological at all, he merely wishes to retain and increase his own personal power.

Your point about historical trends isnt really accurate i can point to plenty of examples where socialist principles have done very well without ending up as a failed state. The UK for example , or Germany. Both have strong Socialist Democratic type parties within the democratic system.

It should t be a mistake, that’s the problem, they can loot burn and murder but we can’t peacefully protest

To be clear, we don’t need to dox the jobless losers that get paid in narcotics to riot in the streets.

We need to go after the doxxers. When someone gets doxxed, find out who first took credit for it and go after them. Dox them and get them charged with criminal conduct or serve them a civil suit. Go after the little white knighting liberal dbag (or group of dbags) that thinks ze is somehow a paladin for ruining people’s lives unjustly. That’s how you put a stop to this.

I don’t expect the current ACLU to do anything, but even the ACLU of 20 years ago would not have got involved here unless and until the district took some action against him. Merely giving him a paid vacation would not normally be actionable, so the ACLU would take no interest.

It’s getting close to the time when people decide the legal system has failed and start taking action to personally and up close destroy people who have destroyed their lives.

It’s a question of when, not if, this is going to happen. Once it starts, it will escalate.

I wonder what provision of the union contract allows his suspension for this putative reason. Public school teachers are notoriously hard to suspend, yet this suspension seems to have sailed straight through,

Teachers Unions are nothing more than Democrat fund raisers. They only stir themselves to help teachers when they get some benefit from it (dues don’t count).

He’s been suspended on full pay and benefits, so why would the union object? On the contrary, the union would be happy if all teachers got the same suspension!

Why is it that Dems are never punished for their crimes no matter how much evidence is available?

Hillary committed numerous serious crimes and hasn’t been prosecuted for one? Selling the favors of her office for hundreds of millions in donations to her slush fund. Mishandling top secret and higher classified information. Violating a subpoena by deleting thousands of documents.

Ask Trump. He promised to lock her up, but he never had the slightest intention of doing so. He was lying.

I still believe that when Trump entered the race he was sure he would lose, and was still on good terms with the Clintons. Then he realized he could actually win this, so he decided to go for the top prize, and obviously his friendship with the Clintons had to be put on hold; but he still thought that once the election was over they could go back to being friends. And had he actually lost I think that would have happened.

But he won, and Clinton was so hurt and offended by that result that she terminated their friendship and declared all-out war on him. And that is what drove him into our hands and resulted in his being such a good president despite his own feelings. Had Clinton accepted the result with reasonable grace she could have had huge influence on him, to the country’s detriment. He might even have appointed her to his cabinet. Thank God Who hardened her heart, like that of Pharaoh, and spared us that outcome.

All the criminals who attempted to frame Trump for Russian collusion. Comey, Biden, Obama et al.