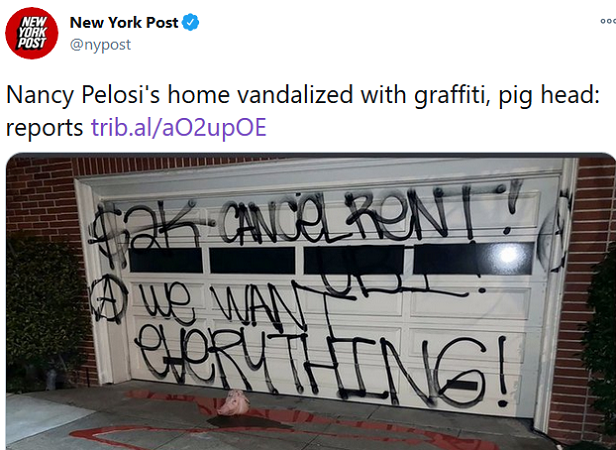 The homes of Senate Majority Leader Mitch McConnell and House Speaker Nancy Pelosi were vandalized in recent days.  The messages painted on their homes suggest that the vandals were motivated by the failure to approve passage of an additional $2,000 stimulus check.

Pelosi’s home was not only vandalized with spray paint, but there was also a pig’s head left there for some reason, possibly as a reference to the pork-stuffed monstrosity being peddled as a “covid relief bill.”

Appalling.@FogCityMidge is right. News is ignoring.

I took this picture just 5 minutes ago. They are literally covering it up.

Dems like Pelosi will learn sooner or later: you cannot appease the violent left. https://t.co/Ohih0zVTpO pic.twitter.com/0JOxzj9KA4

It is interesting to note the way this is being described in the activist media as “tagged with graffiti” left by “a confused voter.”

Here’s a priceless example from the AP, note that this is just about “struggling Americans” “lashing out.”

Vandals lashed out at Senate Majority Leader Mitch McConnell and House Speaker Nancy Pelosi, blighting their homes with graffiti and in one case a pig's head as Congress failed to increase the amount of pandemic relief aid for struggling Americans. https://t.co/zCt7KmTWp5

Can you even begin to imagine the venom that would be spewed if they thought these acts of vandalism were perpetrated by someone on the right? ‘Terrorists! White supremacists! Nazis!,’ they would screech in unison.

My initial reaction was essentially:

And then McConnell’s home was also vandalized.

House Speaker Nancy Pelosi’s (D-Calif.) and Senate Majority Leader Mitch McConnell’s (R-Ky.) respective homes were tagged with graffiti over the New Year’s holiday as a bill that would up the amount of money included in coronavirus stimulus checks failed to pass in Congress Friday.

Early Friday, Pelosi’s San Francisco home was targeted with a spray-painted message that read, “$2K,” “Cancel rent!” and “We want everything!” on the garage door of her house, local NBC affiliate WLEX reported.

. . . . On Saturday, McConnell’s Louisville, Ky., house was targeted with graffiti on its front door that read, “Where’s my money” and additional paint sprayed on a window.

House Democrats late last year passed a bill that would increase stimulus checks from $600 to $2,000.

However, the bill was blocked for the fourth straight day in the Senate on Friday, closing the door on an already unlikely chance that lawmakers would be able to get a bill to President Trump to sign before the end of the current Congress.

. . . . A spokesperson for McConnell’s office released a statement to The Hill on Saturday condemning the vandalism against the majority leader’s Kentucky home.

“I’ve spent my career fighting for the First Amendment and defending peaceful protest,” McConnell said in the prepared statement. “I appreciate every Kentuckian who has engaged in the democratic process whether they agree with me or not.”

“This is different. Vandalism and the politics of fear have no place in our society,” the senator added.

“My wife and I have never been intimidated by this toxic playbook. We just hope our neighbors in Louisville aren’t too inconvenienced by this radical tantrum,” he continued.

Authorities in both cities continue to investigate the instances of graffiti to determine possible suspects, WLEX reported.

Of course, the left is quick to blame Trump.

Speaker Pelosi's house vandalized with the head of a dead pig https://t.co/voYPh1lJTn

So it's come to this @realDonaldTrump ? Are you proud of sinking this low?

Meanwhile, Richard Grenell issues the correct response, no matter who is responsible.

This violence is unacceptable. @SpeakerPelosi’s house in California is reportedly vandalized – we should all be outraged by these acts. pic.twitter.com/E4XhVWtcKx

“House Speaker Nancy Pelosi’s (D-Calif.) and Senate Majority Leader Mitch McConnell’s (R-Ky.) respective homes were tagged with graffiti over the New Year’s holiday as a bill that would up the amount of money included in coronavirus stimulus checks failed to pass in Congress Friday.”

But it was “mostly peaceful”, yes?

Upper right anarchist symbol not on the bricks. They were masked to keep the paint off the bricks. The garage door will be easy to clean/repaint, but bricks/mortar, being porous, are much harder to deal with. This is a smollyay operation. Which I believe we should call all political/racial false flags; a “smollyay op” in honor of jussey smollyay.

I’d be more convinced if the symbol were cut off at the edge of the garage door. As it is, it looks like it just fit, and the fact that it goes right up to the edge may be coincidence

Wait til the Woke Barrack Zombies get a load of this.

Milhouse in reply to notamemberofanyorganizedpolicital. | January 2, 2021 at 10:55 pm

That only applies to the house rules themselves.

I’m willing to place a bet that, now that “important” people are suffering property damage, the police will no longer be ordered to stand down. No mayor would dare!

On another blog there was general agreement that Pelosi and Mitch have far better digs elsewhere and these are just in-district or in-state addresses; they can afford anything. Mitch’s house in particular in a middle class area of Louisville doesn’t befit the many millions of payoffs he’s received thru the Sec. of Transportation.

Pelosi’s is oddly similar to the graffiti on the garage door of the Oakland Mayor back in the summer.

Well, it’s not very far from SF to Oakland, and there ARE a lot of “artistic types” there that would like to use their degree in home decorating.

And it is amazing how those are the most polite and careful vandals ever.

Obviously, this cannot be Antifa, since they are just an idea.

Heh! Actually, I don’t think it is antifa, and it’s certainly not BLM. That leaves a MAGA peep or a Pelosi staffer.

“We want everything” is just not what antifa or BLM would say; it really does sound like a misguided attempt to capture antifa/BLM/leftist language by someone who just doesn’t get it. The pig’s head is another thing that suggests to me this is not a leftie; it either represents pork in the bill (lefties love spending, on anything and nothing, see Cloward-Pivan), or it means . . . well, I have no idea. What would a leftie mean by that? Pelosi is neither Jewish nor Muslim, so what would a pig’s head mean?

Besides, leftists are stupid as stumps, I mean truly sadly ignorant of anything and everything outside their approved curriculum of Organizing For Fun and Profit; You’re a Racist and Don’t Even Know It; and Poop, It’s Not Just For Flushing; Feces Finger-painting For Career Protestors.

We see this same ineptitude directed at the right (far more often), with crazy slogans like “kill all foreigners” or “white’s rule.” No one says (or even thinks) that, but the left thinks we do.

Let Antifa and BLM deny it then. I’m used to them blaming others for everything, let’s throw blame for this at them and let them figure out what to do about it.

To be honest, my outrage meter hits pretty low on this. At least they’re targeting politicians instead of burning down businesses that have nothing to do with their grievances.

I am having a very difficult time caring about this. Yes, it is bad. However, our “betters” have exempted themselves from the laws that we must obey, and they flaunt their and their friends’ special status, spitting in the eyes of the little people. They really ought not be surprised that the hoi polloi are getting angry. And I rather suspect that they ought to get used to it.

I’m more outraged by violence against just about anyone besides Nancy Pelosi. This is much more justifiable as political speech.

I mean sure, it was naughty, naughty. But so what? Pelosi has done worse to all of us, and tried to do far worse than that.

Really don’t much care yet.

If crowds start gathering with pitchforks, torches, and rope- I’ll join them.

Nah drive is too far to join it. Do film it though if they have pitchforks and tar and feathers and the like, or call somebody reliable to film it.

I honestly don’t think Pelosi cares if one of her homes is targeted. She has bodyguards, she’ll be fine.

This doesn’t compare to the riots and destruction of 2020. I’m not very impressed.

Sooo, who wants a new garage door that can be billed to insurance?

For your reading pleasure:

If someone really wanted to get Pelosi’s attention, they would have dumped a dozen or so pints of Jeni’s Milkiest Chocolate Ice Cream on her driveway. That would have brought her to as close to tears as her botox eyes would have allowed.

Looks totally like an fbi false flag operation to get sympathy for the seditionists pelosi and mcconnel, just for the msm hacks to bloviate about with their faux morality.