PIJ chief: “[N]othing happened [in Gaza] without his direct orders and supervision.” 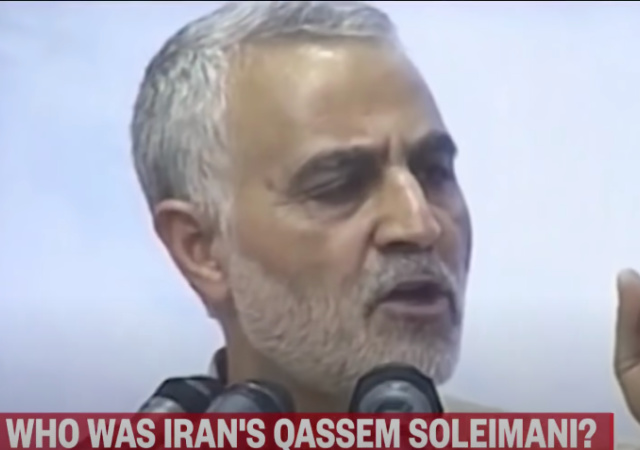 The Palestinian Islamic Jihad (PIJ) has admitted that Iran’s Qassem Soleimani was giving “direct orders” to terrorists in Gaza before a drone strike authorized by U.S. President Donald Trump eliminated him last year.

According to PIJ chief Ziyad al-Nakhaleh, “nothing happened [in Gaza] without his direct orders and supervision.”

The Times of Israel news website reported the revelations about Soleimani’s clout inside Gaza:

A senior figure in the terror group Palestinian Islamic Jihad said the organization received “direct orders” from the late Iranian Quds force commander Qassem Soleimani up until his assassination in a US airstrike last year, and that rockets supplied by the Iranians were used to attack Israel.

Speaking during a December interview with the Iranian al-Alam TV, the secretary-general of Palestinian Islamic Jihad, Ziyad al-Nakhaleh, said “nothing happened [in Gaza] without his direct orders and supervision,” according to a translation this week by the Middle East Media Research Institute.

This came in addition to Soleimani’s efforts to supply the PIJ with modern missiles, and weapons, including those used to attack Israel’s economic and technological hub, Tel Aviv.

“It was almost miraculous. It was very expensive in terms of technology, security, and capabilities” al-Nakhaleh said, adding “I can say that the missiles that [Soleimani] delivered to the Gaza Strip were the ones used to attack Tel Aviv. I can say that Hajj Qassem played a pivotal role in the fact that the Palestinians ventured to attack the capital of the Zionist entity.”

The PIJ chief explained that Soleimani personally supervised and managed the transport of missiles in “complex operations” from Syria, to Sudan, to the Gaza Strip, adding that he personally visited Sudan to ensure the shipments were a success. (…)

The local manufacturing of rockets in the Gaza Strip is also attributed to Soleimani’s guidance, according to al-Nakhaleh. “This is a great and important issue, and without a doubt played a role in strengthening the Palestinian resistance.” adding that, “[Soleimani] did not train [the Palestinians] himself, obviously, but he gave instructions to the experts who supervised these matters.”

President Trump ordered the strike on Soleimani, who led the Quds Force, the foreign terrorist arm of Iran’s Islamic Revolutionary Guard Corps (IRGC), after pro-Iranian terrorist militias stormed the U.S. Embassy in Baghdad in December 2019. According to the Pentagon, he planned further attacks on U.S. diplomats and service members when he died outside Baghdad.

The mainstream media and his Democratic presidential rival, Joe Biden, criticized Trump for killing Soleimani, a man who was directly responsible for the killing of hundreds of U.S. soldiers and thousands of Iraqi civilians. Soleimani,

Biden described the mission as a “hugely escalatory move in an already dangerous region” by taking out Iran’s top terrorist who had American blood on his hands. He even accused the White House of “flat-out” lying over the necessity for ordering the strike.

Naming President Trump and Secretary Pompeo, Rouhani last month declared that Tehran “won’t let them get away” and had “every right to avenge the blood of their popular commander.”

The Biden administration wants to re-enter the Obama-sponsored Iran nuclear deal, which will likely lift Trump-era economic sanctions. At the same time, Tehran is investing heavily to arm terrorist outposts in its strategy to encircle Israel.

“All the missile capabilities of Gaza and Lebanon have been supported by Iran, and they are the front line for confrontation,” a senior commander of IRGC, Amir Ali Hajizadeh, admitted earlier this month.

Thanks to Iran, The IRGC commander boasted: “Today, the Palestinians fire rockets instead of throwing stones,” adding that “[w]e have a general order from the guide, Ali Khamenei, to level Haifa and Tel Aviv to the ground” in case of an armed conflict with Israel.

Putting aside their seven-century sectarian blood feud, albeit temporarily, Sunni jihadi groups like the Palestinian Islamic Jihad and the Muslim Brotherhood’s progeny, Hamas, are taking their marching orders from Iran’s Shia Islamist regime. In its declared war against the U.S. and Israel, Tehran has poured billions earned from oil revenue into rearing Islamic outfits of all stripes.

President Trump: ‘Saved a lot of lives’ in Soleimani attack

Anyone remember those Democrats who were telling us that killing Soulemani was such a bad thing? Like the Senator from CT, who several days before his assassination, told us that Trump was in effect a pitiful helpless giant in the Middle East. Then after Soulemani got killed, the same Senator from CT told us that Trump was a reckless warmonger. Oh well.