The state counters that a bank levy resulted in the account being frozen, not seized 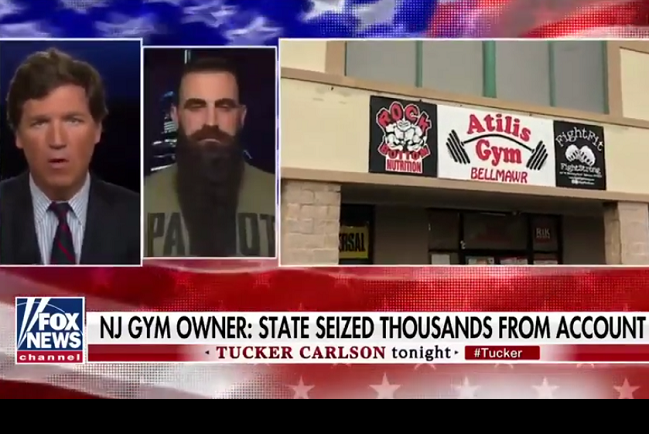 One of the gym’s owners appeared on Tucker Carlson’s show to discuss the state allegedly ’emptying’ the gym’s bank account to the tune of $173,613.60.

The co-owner of a South Jersey gym who has butted heads with state officials over his open defiance of coronavirus lockdown orders told “Tucker Carlson Tonight” Thursday that the state “emptied out every single dollar that we have” amid a legal fight over the legitimacy of millions of dollars in related fines.

“As of yesterday morning, my partner [Frank Trumbetti] and I checked the bank statement … and we had no money in our bank account,” Atilis Gym co-owner Ian Smith told host Tucker Carlson.

Smith tweeted Wednesday that New Jersey Democratic Gov. Phil Murphy “and his cronies” had seized “100%” of their legal defense funds, an amount he said totaled $173,613.60.

Smith further argued that the seizure amounts to “effectively and intentionally interfering with our right to council [sic].

“If you think that’s gonna make us stand down, you’re delusional,” he concluded.

. . . . Gyms are allowed to remain open in New Jersey, provided they follow COVID-19 protocols. According to Smith, Atilis Gym patrons are not required to wear masks, thus violating the protocols. The Bellmawr establishment is fined $15,000 every day it remains open and does not adhere to the protocols.

“This is in the middle of an appeals process and ongoing litigation in the matter of the fines and several other matters regarding the state, including a lawsuit against Governor Murphy and [State Health Commissioner] Judith Persichilli,” Smith explained.

A spokesman for the New Jersey Attorney General’s office told “Tucker Carlson Tonight” in an email Thursday that Smith’s information “is not accurate.”

. . . . In a subsequent email, the spokesman indicated that $165,222.16 in assets had been “frozen as a result of a bank levy having been issued due to the State’s collection efforts”.

“Again, we can confirm that we’re seeking to collect on the judgement that has been entered into –$134,463.08,” he concluded. “Whether that affects the entire balance of the gym’s funds is a question to ask the bank.”

So the state is claiming it didn’t steal his money, just removed access to it.

Unfortunately, the chances that anyone at the state will pay a price for this are incredibly small.

Not exactly. The funds have not been removed from the account.

Notice of levy has been perfected, by action of judgment. There is recourse and he better find a run-of-the-mill, or better, lawyer, accountant, or both, in a hurry!

Unfortunately the state has a judgment and is entitled to collect on it. The judgment is for almost $40K less than the gym’s balance; freezing the account was the bank’s decision.

Not exactly… the bank is merely complying with state banking laws and federal banking regulations. They do NOT have the option of “freezing” the account. Due diligence may be optional in some contexts though I can’t immediately think of any.

The bank has received lawful notice and, having received such notice, given the depositor notice. It may be more of a compliance context as the bank is still obligated to honor transactions that are presented subsequent to the date of notice that preceded the date(s) of notice.

There are other priorities and circumstances that preserve and protect the depositor, payee and the bank’s obligations, in the context.

I have known cases where bankers have advised interested parties of pending actions, in both directions!

His only recourse, at this point, is to file for bankruptcy and obtain a stay against the levy action.

Sheesh, does the guy not have an accountant or legal counsel? This should never have been a surprise.

He may as well file Chapter 11, even in proforma, just to preserve some flexibility with a whole bunch of other stuff that is about to come his way.

Why the fuck should he file for bankruptcy. Fuck the fucking man and his Chinese fucking lapdog.

Because the court will grant an IMMEDIATE stay of execution against the state’s lien(s) and judgment(s). If you know of a more effective way to stop the process, let me know.

This is fairly bread’n’butter work for practitioners, at least to my experience. The State of New Jersey is the villain but the victim has and is doing nothing to preserve his interests in an aggressively adversarial engagement.

OTOH, I am not providing legal, financial or other professional advice or services–and I do not believe that the business owners are looking for that so much as seeking publicity and floundering in an inappropriate forum 🙂

Indeed, one of which is chapter 7 when you run out of process under 11. On the uptick, you can probably find a way to get a “new lease” and even “lease back” the equipment, all the while making sure that employees and/or executory, pendant or obligations are managed in accordance with criteria.

Nonetheless, the gym owners really need professional counseling and maybe some representation. Those are such vague terms.

Right. My first thought was that if he didn’t see this coming, he’s a financial idiot.
You don’t tell the guv “come and get me,” then leave your s*t on the sidewalk where they can take it.

Gotta admit, I would not have expected for them to have so much cash on hand–virtual proof that they did not have a lawyer!!!

Absolutely, That money should have been moved long ago.

This country is horrible, just horrible

soon to be getting worse

Much worse. Soon, we’ll be hating half our soldiers.

Whoa, bro! Are you a veteran? There a millions of us out here. That is NOT the way we roll.

Heard that before. It was right before Katrina.
Inauguration Day will answer the question of how you really roll.

Henry… I am from New Orleans and was in Louisiana during Katrina and Rita. General Honore is who he is… in the same way that Deval Patrick is who he is.

Mary Landrieu made a “prominent” appearance, bralessly, in a humid white t-shirt, showing her “raging” contempt for W.

In some ways, NOLA not so different from New Jersey, even the food is good.

Nah, it’s actually a pretty good place that is devoid of leadership. The system has been hijacked by a relatively small consort of malefactors. The original system has provided for dealing with this sort of defect.

Not all of it, but too much of it.

If you think it is bad here, check out Michigan, NY, CA, PA, GA, OH… Illinois?

Bud, the worst of the bunch are almost all state employees, like union sponsored school teachers, overpaid firefighters and cartel wielding law enforcement that “protects” civilians around construction projects.

You think it is rough in Texas, check out Massachusetts and see how much police personnel take in from sitting in state owned vehicles, safely directing traffic around bridge projects!

A few years ago, one of the highest paid employees in New Jersey was a toll collector who had finessed and mastered the overtime system on the Garden State Parkway. Bless his heart, the parkway was passable even under the worst conditions.

To the contrary, it is absolutely compliant with due process under state law and commercial code. If nothing else, from the state’s perspective, it minimizes arbitrary discretion.

Just because a business owner is not aware of the state does not preclude the state invoking… you gotta hate this… “settled law”!

Perhaps we should freeze our tax payments and take our money out of banks. Not forever, just long enough to send a message.

You don’t EVEN want to go down that path. Wanna see how fast “we” turns into “thee”? Just wait for your neighbors or coworkers to come to your rescue.

Ah shucks… will this work?
https://youtu.be/tflq6hp1oXE

The Oath of Office (for officers): “… having been appointed an officer in the _____ (Military Branch) of the United States, as indicated above in the grade of _____ do solemnly swear (or affirm) that I will support and defend the Constitution of the United States against all enemies, foreign or domestic, that I will bear true faith and allegiance to the same; that I take this obligation freely, without any mental reservations or purpose of evasion; and that I will well and faithfully discharge the duties of the office upon which I am about to enter; So help me God.”

Maybe the words have changed. Officers are not held to the same standard as the soldiers who have been flooded upon the MILITARY District of Washington, District of Columbia.

George WASHINGTON and COLUMBUS used to have a different context and meaning than Pelosi, FRAUD and DEMENTIA.

FWIW, I do not believe that the soldiers forced onto the streets of Washington, D.C., want any part of this process.

To the contrary, if any of them do raise an arm against another American, the whole deal is off and that such an abominable violation will be the precursor to a National Deer Hunting Season.

Hannity’s lawyers said that no rational thinking person would believe anything they hear on his show and that it is all for entertainment purposes.

All the more reason to keep a bank account in the Cayman Islands if you own a business in the US.

Or the International Bank of Seely.