L.A. Cracks Down on Party House After Repeated Lockdown Violations, Shutting Off Its Power and Water

L.A. Cracks Down on Party House After Repeated Lockdown Violations, Shutting Off Its Power and Water 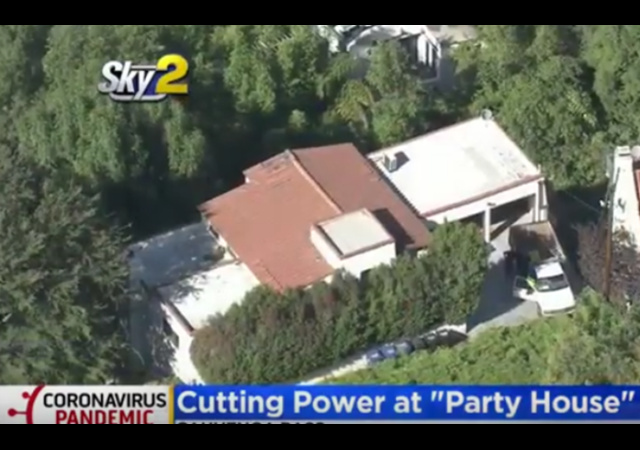 At least 40 people attended a party Saturday at the home in the 800 block of North Curson Avenue, according to the Los Angeles Police Department.

Officers arrived at the home at 11 p.m. after receiving a complaint of a gathering at a “social media influencer residence” and cleared the party, an LAPD spokesman said.

Garcetti spokesman Alex Comisar said in a statement that each time they went to the home, officers informed the residents that large gatherings were in violation of the mayor’s public order.

The utilities will stay off until the mayor orders them back on, LADWP spokeswoman Ellen Cheng shared.

However, that wasn’t the only LA-area party drawing the ire of the pandemic police.

The task force was alerted about an adults-only ‘swinger’s party’ on 61st Street in South Central where middle-aged guests partied without a care, dressed to the nines in heels, dresses and suits.

The sheriff’s department said arrests on Saturday were made at two commercial buildings – the swinger party took place in the 600 block of West 61st Street in Vermont-Slauson and the other in the 400 block of West Pico Boulevard in downtown LA.

The latest parties violated California’s strict lockdown rules under which all citizens are ordered to stay home except for permitted work, local shopping and errands and are discouraged from meeting with other households.

Such shut-downs have also occurred with other party-houses, including a September shindig at a Cahuenga Pass house. However, it doesn’t seem to be offering much deterrence.

I will give Los Angelenos credit for coming up with a novel and fun way to achieve herd immunity.

A little farther south, the San Diego County Board of Supervisors approved pandemic-control measures to step up enforcement against businesses not following public health orders.

In a statement, Fletcher said due to the “significant surge in cases, hospitalizations, and deaths the new Board of Supervisors again reviewed those enforcement options” and adopted all of them.

“We are increasing resources and reaffirming our commitment to slowing the spread of COVID-19 in San Diego County by expanding the scope and commitment of enforcement by our county’s compliance team,” Fletcher said in a statement. “Taking these actions will protect lives and help in the regional effort to beat COVID-19.”

The county’s compliance team will now be able to:

However, not all of the county supervisors supported the new measures.

Supervisor Jim Desmond voted against the measure, saying that he believes “all business sectors should have the opportunity to open and operate safely. The action also includes restricting relief funds to businesses.”

Desmond has been the lead advocate in opposition of implementing lockdown policies, explaining that the government should not pick and choose which businesses.

The move outraged many people.

Enforcement consistent with the data, right? The data overwhelming suggests that shutting down small business does not stop the spread.

But hey, go ahead and feel important. Shut down the small businesses that make San Diego a great place.

How about the new board vote to give your taxpayer funded paychecks to these businesses to HELP them rather than trying to punish them for just trying to survive.. You can add @ToddGloria to the list since he just accepted a $100k/yr. taxpayer funded raise.

Inconceivable! Didn’t Mayor Garcetti get the memo that the Biden* administration has already magically cured the Wuflu?

If Garcetti isn’t careful he will find himself cancelled by our Communist overlords!

Garcetti is a Democrat. That area is still predominantly Jewish. Do the math.

/am I really that far off?

This explains why I refuse to live where the utilities are owned and controlled by cities, etc.

There is an argument for solar electric. I agree that buying leading edge solar costs more than it is worth, but power companies are upgrading system, leading to 470 panels in like new condition and other equipment at 20% cost. I am building a 10KW system right now.

Meanwhile, whatever happened to that other house on the news that has been foreclosed three times but is being “protected” by antifa/BLM?

Being protected by ANTIFA/BLM it is above and outside the law.

This is in a Democrat polity with the new illegitimate regime coming to power in DC.

Maybe some neighbors are just pissed they didn’t get invited to the parties on North Curson Avenue and other places, so they call the police . . .

Or, sick to death of the constant noise. I’m familiar with that stretch of Curzon. The houses are close together. The street is self is very narrow, and parking is extremely limited.

Taking advantage of the draconian Covid measures is not a good thing. But sometimes in cases like this it’s the only recourse the other people have.

This is just the beginning folks. They will start shutting down water and power to people who they consider a danger to the government and society.

I sure understand the noise issue.

Garcetti is an incompetent boob, who is where he is because of his father. He has done nothing for Los Angeles, governing “in the negative” – that is, he does nothing except take for himself and his cronies, and when he does invoke the office of the mayor, he does stupid things to hurt the city.

He’s just like di Blasio and that other idiot Lori Lightfoot: they’re in place only to destroy. And if they keep destroying, the left’s media machine will try and protect them.

That said, what that scumbag pelosi is doing by inciting fascism is covering her corrupt ass, which Trump was exposing.

THIS is why pelosi hates Trump and what she and her sleazy family are trying to hide:

“Pelosi’s entire family has generational corruption, tied to 4 families that have run CA for 80+ years like Game of Thrones:”

“.. leading to 470 panels in like new condition and other equipment at 20% cost. I am building a 10KW system right now.”

Fantastic! How can I get in on that? 🙂

Surely the mayor’s action is ultra vires? The problem is that litigating it would take longer than its worth, and I doubt any California judge would order meaningful relief or damages.