In Memory of Petra Marquardt-Bigman

In Memory of Petra Marquardt-Bigman

The Legal Insurrection family is mourning the loss of our dear friend, researcher, and author. 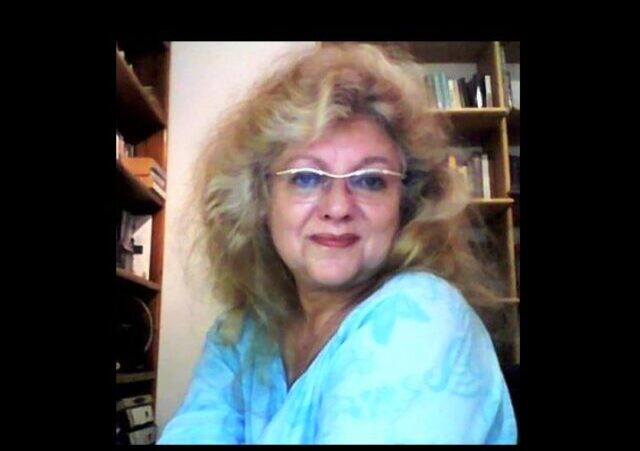 Dr. Petra Marquardt-Bigman has passed away. Petra was a dear friend, and a researcher and writer for Legal Insurrection and many other outlets.

The About section of her personal website describes her background:

I grew up in the southern part of Germany, in the small village of Schlat not far from Stuttgart. My parents were “Flüchtlinge” – refugees from the part of Germany that is nowadays Poland. The fact that we didn’t speak the local Suebian dialect was perhaps one of the reasons why I’ve always felt a bit like a foreigner there.

Yet, I spent close to three decades in the Schwabenland, attending the Freihof Gymnasium in Göppingen and studying at the Eberhard Karls Universität in Tübingen.

In 1986, I got a scholarship as a Visiting Researcher at Georgetown University to do the research for my Ph.D. on US intelligence on Germany in the 1940s. I left for Washington D.C. in August 1986, and a few days after my arrival there, I met a certain David Bigman…

That was the beginning of a twentysomething-years-long period of a rather nomadic existence. To be sure, we always had a base in Israel, and for much of the 1990s, we lived in Washington, D.C. But we also lived for a few years in the Netherlands, spent some fascinating time in India, Korea, Vietnam and China and got to visit many other countries.

As exciting and interesting as all the globetrotting was, I’ve been ready to settle down again for some time, and I’m more than happy that we have now done so right on the beach of Bat Yam.

Her husband David fought in the 1967 Six-Day War, participating in the liberation of Jerusalem. He apparently suffered injuries that shortened his life. 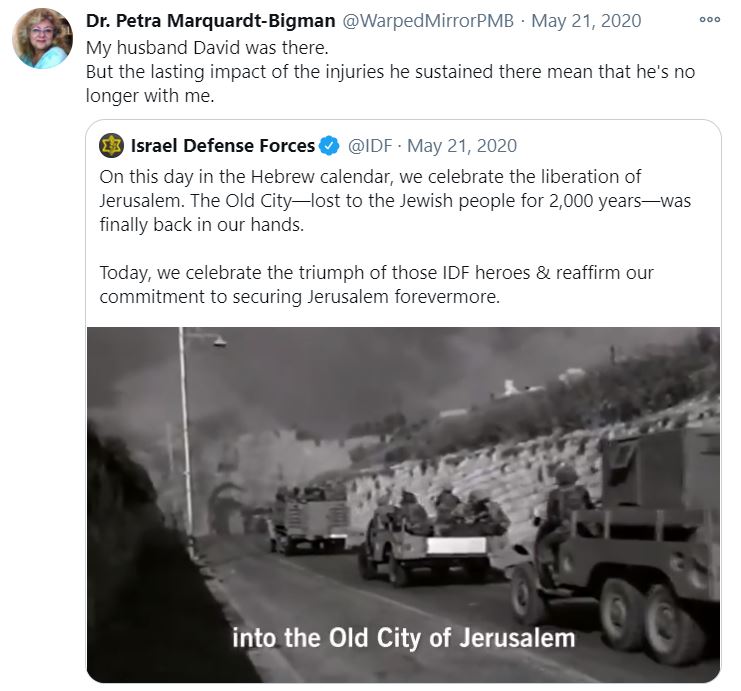 Blogger Elder of Ziyon provides a summary of the breadth of Petra’s writing and research:

Petra was a fearless scholar and a passionate writer. She had written for publications on the Left and the Right, from The Guardian to The Jerusalem Post, from Haaretz to Tablet. She wrote articles for The Forward that challenged that site’s liberal audience.

Her Times of Israel bio probably captured her own self image best: “Petra Marquardt-Bigman is a politically homeless lapsed leftist who can’t get used to living in a time when the Nazi slogan “The Jews are our misfortune” is considered quite acceptable in its 21st century version “The Jewish state is our misfortune.” She therefore writes mostly about antisemitism, anti-Israel activism and BDS, i.e. Bigoted Double Standards. She grew up in Germany and has a Ph.D. in contemporary history.”

Elder also recounts his last conversation with Petra, as she was dying from cancer:

As a native German, Petra understood antisemitism and was an expert on the topic. Her articles are smart, well-argued, filled with references and effective. It was truly an honor to host her writings here.

Petra loved Israel and she loved the Jewish people.

Mrs. Elder and I visited Petra a couple of times at her beautiful Bat Yam apartment  with a stunning view of the Mediterranean. She was a gracious host and one of my fondest memories of Israel is sitting on her balcony, drinking tea and shmoozing while looking at the beach and the sea in the moonlight.

I learned she had cancer in October when I noticed that she hadn’t tweeted in a while and contacted her. Even though she was obviously in pain, she remained gracious and appreciative of the good in her life. She wrote to me, “I have to say that with all I’ve ever had to say about he horrors of Israel’s medical system and the hospitals, the oncology department in Tel Hashomer is amazing. What’s also amazing when you spend a lot of time in a place like Tel Hashomer is what a huge contribution American donors make. Absolutely awesome.”

In hindsight, it makes sense now why I hadn’t heard from Petra in several months. The last time I heard from her was in late June, when I was the target of Cornell Law School’s ‘cancel culture’ push; Petra sent me a link to a tweet about a tenured Cornell professor saying crazy stuff about ‘whiteness,’ including the cover note to me: FYI & amusement.

I only met Petra once, during one of my 2015 trip to Israel. She read at Legal Insurrection that I was making the trip and reached out to me.

I’m a great admirer of your tireless fight against BDS, and I’m very grateful to xxxxxxx for connecting us on Facebook. I’ve been blogging at the Jerusalem Post (and occasionally other sites, see: http://warped-mirror.com/about-4/petra-marquardt-bigman/publications/) since late 2006, though in the past few years, my output has been somewhat haphazard due to difficult circumstances in my family. In the past 2 years, I’ve started to focus on antisemitism (I have a Ph.D. in contemporary history) and BDS — in part provoked by Max Blumenthal’s screed “Goliath” and the shameless promotion of it by the New America Foundation ….

I am currently in Germany but will return Monday night, and if your schedule allows — or if you give a lecture I could attend –, I would be very happy and honored to meet you. Since I live in Bat Yam, it would be no problem for me to come to Tel Aviv. My phone numbers are: xxxxxxxx & xxxxxx (however, there is a problem with voice messages in both phones).

Wishing you a good time in Israel,

We met outside my hotel at the beach in Tel Aviv. She drove in from Bat Yam, just south of Tel Aviv, and we had coffee. Since then, we were frequent pen pals. With the lockdowns and everything else going on, I just assumed we’d reconnect at some point. I had no idea she was ill.
Petra was one of the best researchers I’ve ever encountered. She had a skill for grabbing social media posts and connecting them to a bigger point. By quoting what people said when they didn’t think others were watching, Petra was able to expose supposed human rights activists for the soundrals they are.

Just scroll through the several detailed research reports Petra wrote for Legal Insurrection to see her work in action:

But more than writing, Petra was a great source of information, links, and sometimes translations for me.
I pressed Petra to write more frequently for Legal Insurrection, but she liked to spread her work around many publications to expand her reach. She really upset all the right people.

In October 2017, when she was completing an exhaustive research post, I wrote her:

BTW, I certainly can pay you for these research posts, don’t want you to think I’m taking advantage.

No way you’ll pay me!!! Any work I contribute is just a small Thank You from Israel for all that you do.

The Legal Insurrection family is mourning the loss of our dear friend, someone I came to love.

Others have posted fond memories of Petra:

??? Such a tremendous loss. I got to know Petra while blogging for @LegInsurrection. She was a brilliant scholar & writer. Her work on #Antisemitism informed my own; I cited her many times. She will be greatly missed. RIP.

Petra Marquardt Bigman, who lived in Israel, was not Jewish and was subjected to sniping from bigots who took potshots at her on that basis. She was undeterred and was an eloquent voice for Israel and against antisemitism. She will be missed. https://t.co/bG9vDi4Rxf

Dr. Petra Marquardt-Bigman has passed away (@WarpedMirrorPMB) and her powerful and knowledgeable voice will be missed. You explained so many things to me and I am so extremely grateful for your advice. Learned about that just recently, still cannot comprehend. Rest in power, ז״ל.

We've lost Petra Marquardt-Bigman, a fearless defender of the Jewish people. As she wrote, she refused to accept that the Nazi slogan, “The Jews are our misfortune” has again become acceptable by substituting “The Jewish state” — and fought it with all she had.

May her memory be a blessing 🙁

What a great loss.

When is pelosi going to die?

About the same time as Joe Biden and Chuck Schumer, I suspect. AOC will take over the House, Bernie Sanders will take the Senate, and Heels Up Harris will take over POTUS, and the Lunatic Fringe Coup will be complete……

Maybe you could attend Dr. Marquardt-Bigman’s funeral and poll the mourners.

She sounds like a magnificent woman with a powerful mind.
I would have liked to have personally known her
Such a loss for humankind

Prof., I’m sorry to hear this. You have had the chance to be around so many wonderful people.

May she rest in peace.

May angels surround and protect her soul on its journey home.

I am saddened to hear this news. I appreciate Professor Jacobson’s tribute and reminiscences. Petra lived a fascinating and conscientious life.

The Jews are our misfortune. The “burdens”, you say.

She fought the good fight. #RIP

That said, Pro-Life, Liberty, and the pursuit of Happiness.

I read Petra for years and had noticed her lack of new pieces. I learnt from her articles and her Twitter. She had the goods on Marc Lamont Hill.
May her memory inspire more like her.
??

I don’t recall having noticed her byline. Now that I have read about her, her becoming ill, and passing, is obviously a tremendous loss to her friends and family, and to humankind at a cross-roads with its guiding light (i.e., America) apparently on the verge of becoming another Venezuela.