“The selected photo is determinedly unfancy. Kind of messy. The lighting is unflattering. The effect is pretty un-Vogue. ‘Disrespectful’ was the word used most often on social media,” the New York Times reported. 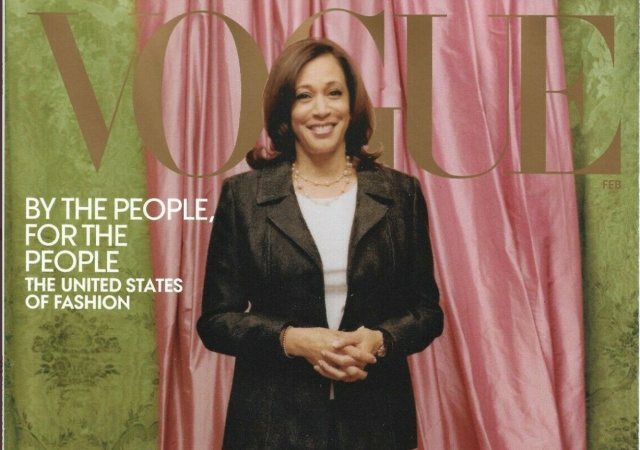 Anyone wondering if the MSM would go soft on the incoming Biden-Harris administration should fret no more. Just this week, reporters and anchors alike have spent a considerable amount of time reporting not just on the fallout from the Capitol riots but also on the “outrage” surrounding Vogue‘s Kamala Harris cover.

It all started when a photo of Harris on the cover of the February edition of Vogue magazine was leaked on social media over the weekend. It showed her in a very informal outfit that included Chucks sneakers, skinny jeans, and pearls. The picture colors didn’t look as vivid and bright as the more glamorous photos one usually sees upon first glance of the magazine.

Vice president-elect Kamala Harris is on the cover of Vogue’s February issue pic.twitter.com/NGxhyGaoS9

The outrage was immediate, so much so that Vogue trended for a time on Twitter:

“PLEASE DO HER JUSTICE and REDO this cover! Put her in a background that is regal like she is! Your old drape from the CEO’s office is insulting.”

Another reader wrote. “Love that she’s on the cover but why this one?! Y’all could’ve done WAYYYY BETTER.”

New York magazine contributor Yashar Ali further stirred up controversy when he tweeted that a source “familiar with publication plans” told him the photo — a full-length image of Harris standing on an overly long pink drape against a green backdrop — isn’t the one her team expected to make the front of the magazine’s print edition.

Harris’ camp instead thought the photo of Harris used for Vogue’s digital edition — depicting her in a baby-blue Michael Kors Collection pantsuit — would be chosen for the print edition, too, the source allegedly said.

The Washington Post‘s fashion reporter Robin Givhan didn’t waste any time weighing in either, proclaiming the print version’s cover did not give her respect because, among other reasons, it … used her name:

“The cover did not give Kamala D. Harris due respect. It was overly familiar. It was a cover image that, in effect, called Harris by her first name without invitation.” https://t.co/kudvZSiGMx

Bloomberg White House reporter Jennifer Epstein tweeted out a link to Givhan’s piece with a note about how the cover supposedly “didn’t meet the moment.”

When there’s a story about race, gender and style, @RobinGivhan is the voice I want to read. Here explaining why Kamala Harris’s Vogue cover didn’t meet the moment. https://t.co/OSfMnwNOlI

The Washington Post also published an opinion piece on the “issue,” with the author playing the race card:

CNN reported Harris’ team were “blindsided” by the print cover. How horrifying!

Kamala Harris' forthcoming appearance in American Vogue has sparked criticism for appearing casual, with the Vice President-elect's team blindsided by the magazine's choice of cover. https://t.co/VfWaETUEoe

Meanwhile, ABC, CBS, and NBC all filed reports about the “controversy,” with NBC’s Today show interviewing Harris’ niece Meena, who also hinted that Harris’ race might be a factor in why that particular photo was chosen for the cover:

“It’s a big moment where we’ve elected the first woman in history, the first black woman in history and South Asian woman to hold the office of vice president in our country’s history. That is a huge historic moment….It deserves the proper celebration of that moment, especially, you know, for a magazine that often has not had black women on the cover.”

The image was shot by Tyler Mitchell, who, in 2018, became the first Black photographer to shoot a Vogue cover (his subject was Beyoncé) and is known for his unstudied aesthetic. Though Gabriella Karefa-Johnson receives credit as the sittings editor, a.k.a. the fashion editor in charge, Ms. Harris chose and wore her own clothes. The selected photo is determinedly unfancy. Kind of messy. The lighting is unflattering. The effect is pretty un-Vogue. “Disrespectful” was the word used most often on social media.

It was always going to garner outsize scrutiny. Complicated by Vogue’s own messy history with race.

Vox, like the Times, also brought up how Vogue‘s “protracted history of racism (which [editor-in-chief Anna] Wintour has previously apologized for) is impossible to ignore.”

Vogue did, however, have one defender. Mercury News feature writer Martha Ross, who wrote an entire piece that focused on how Harris got the cover First Lady Melania Trump had wanted during her four years in Washington, DC but didn’t get:

Melania Trump complained about being denied the honor of a Vogue cover during her husband’s presidency, but she probably lost that opportunity because she has been accused of enabling one of the most divisive administration’s in U.S. history, according to her ex-best friend Stephanie Winston Wolkoff.

Between the post-election “reports” about Joe Biden’s socks, and questions about whether or not members of the Biden team will take musical instruments with them when they travel overseas, the videos from gushing reporters during Harris’ presidential campaign about her fashion choices, and now this, it’s clear that the type of hard-hitting “journalism” we’re used to seeing from the media during Democratic presidential administrations will be returning – and with a vengeance.

Awe come on man. The Democrat media has worked hard to be afforded the privilege of sucking off China Joe like a Kalifornian prostitute looking to get her political career underway.

mailman: use of this phrase “Awe come on man. “ indicates that a reward will be coming from the party when you are identified as a reactionary intent on fouling public discourse.

You have been warned. Save your dog whistle for your dog.
All you lying dog face pony soldiers think you can dis the man, and you can’t. Come on man, use some common sense.

You notice that “sniffy” Joe Biden is smiling a lot more?
Think his Veep has anything to do with that?

You think those shoes are dirty? You should see her kneepads!

Kamala, when she was younger, might have been suitabkle for a Hustler spread.

At least she’s not on her knees.

Vogue showed the world the sheets that Kammy Harris slept her way into politics on. How could that not been a more historically accurate photo?

This is North Korea-style outrage, which means it is outrage for a political purpose. You can bet the “journalists” in the Joseph Goebbels media who are hyperventilating about it are perfectly well aware that Vogue meant to worship our new Communist overlords. The manufactured anger is a signal to everyone on their side: This is what will happen to you if you dare step out of line. You will see your business closed down, your comrades furiously denounce you, your lives ruined. You will be CANCELLED.

Any tinpot dictator can stoke fear in the hearts of their adversaries. To be truly powerful you must completely terrorize your friends.

Meh. The left savages the left. I’m all outta popcorn.

genuine proof of the old addage about silk purses

Put Melania in that outfit and she would make it look good.

A disrespectful cover? That would be one with her heels high up in the air, and her panties around her knees. Disrespectful, of course, but probably more truthful than disrespectful. Just ask Willie Brown.

PS – Maybe LI should start a pool as when 25A kicks in for Harris.

She is approaching the age were few will want to see or dally with her.

“CNN reported Harris’ team were “blindsided” by the print cover.”

Let that sink in.
CNN complains that the magazine did not seek prior consent of the politician to print a (comparatively flattering) photo of said politician who is a public figure.

If we compare and contrast CNN’s “coverage” of the Trump presidency. I’m sure they asked for permission for all of their jouralisming to check if it was sufficiently sycophantic, right?

Or, you know, she didn’t HAVE to wear tennis shoes with dress clothes.

As much as I dislike the incoming powers that be, I don’t see it as unflattering… I just see it as a weak attempt to be “one of the little people.”

And failing at it monstrously.

Soon: Jill Biden on the front cover of Vogue, since having a FLOTUS there will suddenly become acceptable.

“CNN reported Harris’ team were “blindsided” by the print cover.”

So Harris’ “team” sat there during the photo session and allowed Harris to be photographed in that outfit with the filthy Converse™ sneakers but were “blindsided” when Vogue choses that photograph for their cover?

What a bunch of hypocrites.

You know full well this is just another manufactured non-troversy to keep Heels Up Harris trending on Twitter. If the “team” didn’t want that photograph as the cover they could have told Vogue not to use it. End of Story. But they didn’t. And I can’t see how Vogue would use it without approval of Harris or someone on her team. So again, just another manufactured non-troversy to keep Harris in the news and trending on Twitter.

So far down my give-a-shit list, my pen ran out of ink

NEVER be the first one to stop clapping for our leader.

Kamala is way too self-adoring for my tastes. But luckily I don’t even bother to look at these magazines anymore they are so irrelevant and out of touch.

Possibly they were hoping for Vogue’s 2011 dictator chic treatment?

“ Asma al-Assad is “a rose in the desert,” according to Vogue. She’s the first lady of “the safest country in the Middle East.” She’s “breezy, conspiratorial, and fun,” and she jets around the country in a Falcon 900. Her husband, Syrian president Bashar al-Assad, is a “tall, long-necked, blue-eyed” man who “takes photographs and talks lovingly about his first computer.”

I dunno–did they show Kamala’s knee pads along with the tennis shoes?

Does Willie’s willie gobbler deserve any respect at all?

Let’s face it. She’s unattractive. No kind of photography can cover that up.

Even though she doubled down with plastic surgery.
Pretty scaaaaary, kids, wooooooooo!

What do you expect for Professional Sex Worker.

What is there to respect her for? We know how she got into politics. We saw the disgraceful way, including a perjury trap, that she questioned Brett Kavanaugh with total disregard for the truth. We saw how she tried and failed to take down Biden, and then how Congresswoman Tulsi Gabbard destroyed her and that should have ended her political career — until Biden picked (or was told to pick) her for VP.

I respect the office of VP. I don’t respect Kamala Harris. Which I guess is all the more reason for the pressure to make her look great in a picture.

She really dressed like a VP with those sneakers! The picture could have been improved considerably by putting the drape in the front.

Very nice pics of the Democrats Professional Sex Worker. Wondering how long it will be before the American Communists will have Biden taken out of the picture.