Sanders pointed out that with “the radical left” in charge in D.C. “your governor is your last line of defense.” 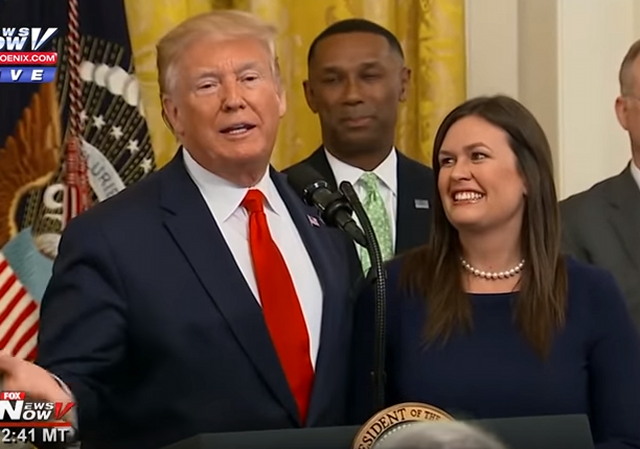 “To remain free we must have law and order and resolve our differences peacefully,” Sanders said in an eight-minute video. “The radical left’s solution is to impose government control and censorship from the top down, but their socialism and cancel culture will not heal America. It will only further divide and destroy us.”

Sanders pointed out that with “the radical left” in charge in D.C. “your governor is your last line of defense.” She promises to “defend your right to be free of socialism and tyranny.”

Sanders’ dad Mike Huckabee served as Arkansas governor from 1996 to 2007.

If Sanders wins she will be the state’s first female governor.

Sanders left her press secretary post in 2019. Many thought she would eventually run for office.

You go girl! Support you all the way.

Do you even live in Arkansas? We don’t need another governor like the ones we’ve had.
Jan Morgan is the sensible choice for Arkansas.
If Sarah is anything like her nut job daddy, we don’t need her.
Remember her daddy a couple weeks ago saying Trump instigated the riots?
He turned loose some murderers from prison and they went out and murdered more people.
I wouldn’t vote for anyone even loosely associated with the huck nut job.

This is going to be good.

Well there will at least be 3 US Governors that are still on the Trump train post Trump presidency.

We could use her in Texas.

State governments will be crucial now that the Union has been dissolved.

Please don’t include photographs of this woman in future posts about her.

I bet your really unattractive as much outside and in

Far better looking than Sarah. I’m at least a 3.

In my first business, about 9 years before I married, I ran into a gorgeous young lady. I ended up with a a difficult relationship, and when she was mad at me she would be snotty with clients.

I arranged for a friend with a business to hire her, and I never hired pretty women after that. Is is bad business to having someone working closely when you are attracted to them.

A few years later she went to modeling school, married someone with big bucks, flying into town periodically on a Lear jet.

The thing is that with extreme beauty, there are endless temptations, most of the time it ends badly. In the end, most beauty fades badly.

You need to lighten up. She ain’t bad looking. She’s chubby, but to paraphrase Jules Winnfield. What’s a girl gonna do? She’s a Huckabee.

It’s going to be tough, Tim Griffin has a lot of name recognition (for good or bad) and so does Leslie Rutledge. AG Rutledge is a very strong Conservative though she won’t get support from (m)any of the Democrats in the state.

I like Sarah – she was and is a brave supporter of Trump – but Leslie has done a great job IMO. Darn, it’s gonna be a tough one.

Jan Morgan would be the best pick for Arkansas. Rutledge is a pure unadulterated RINO.
Sarah has a problem with her daddy, the killer. The idiot set murderers free and they immediately went on another killing spree. He never even admitted that he made a mistake, because he said god told him to do it.
We don’t need anymore freaks in office that think they talk to god.

With Sarah coming out for Gov. of Ark., she will become a formidable GOP opponent when (not if) she runs for POTUS.

You people don’t even know her. Arkansas needs Jan Morgan. Jan is a real conservative.
Sarah is not cut out for the job. Her daddy was an abomination, horrible. He thinks he talks to god and lets killers out of prison so they can go on another killing spree. We don’t need anymore morons running the state, Asa was bad enough.
Arkansas repubs are clueless, they will vote for the rino every time.