Her family and friends rejected her after her conversion, but St. Elizabeth grew the faith in America while raising five daughters by herself. 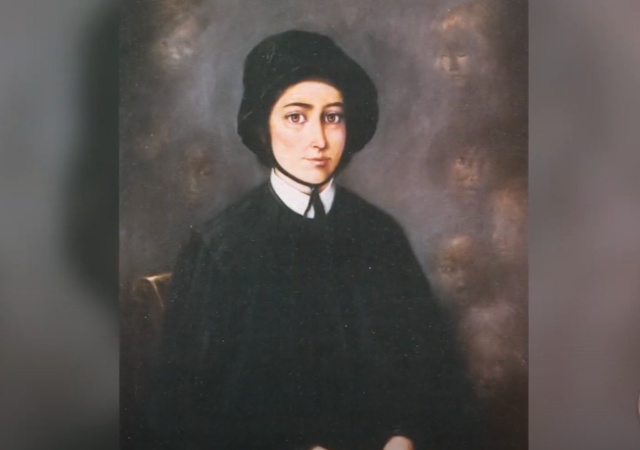 We celebrate St. Elizabeth Ann Seton, America’s first saint, on January 4th, which is the eleventh day of Christmas.

St. Elizabeth was born two years before the War of Independence to an upper-class family in New York.

Despite her wealth, St. Elizabeth was a quiet child who kept to herself. She relied more and more on her Bible for “support and comfort” as she grew older.

St. Elizabeth found happiness with William Seton, a young wealthy man. They enjoyed a “happy and prosperous” marriage, in the beginning, but trouble hit:

Within four years, William’s father died, leaving the young couple in charge of William’s seven half brothers and sisters, as well as the family’s importing business.

Events moved quickly from there with devastating effect. Both William’s business and health failed. He was finally forced to file a petition of bankruptcy and, in a final attempt to save William’s health, the Setons sailed for Italy, where William had business friends.

Unfortunately, William died of tuberculosis while in Italy. Elizabeth’s one consolation was that he had recently awakened to the things of God.

The story reminds me of Job. Despite all of the hardship, death, and setbacks, St. Elizabeth grew closer to God. She knew she needed Him more than ever.

So much so she went to the Catholic Church:

In Italy, Elizabeth captivated everyone by her kindness, patience, good sense, wit, and courtesy. During this time Elizabeth became interested in the Catholic Faith and, over a period of months, her Italian friends guided her in Catholic instruction.

Elizabeth’s desire for the Bread of Life was to be a strong force leading her to the Catholic Church.

Unfortunately, a lot of St. Elizabeth’s friends and family members disowned her when she came back to America.

That did not stop her. St. Elizabeth did so much in such a short span of time while raising her five daughters.

St. Elizabeth established the first Catholic girls’ school and orphanage in America. She then founded the Rule of Sisterhood, America’s first congregation of religious sisters:

At the suggestion of the president of St. Mary’s College in Baltimore, Maryland, Elizabeth started a school in that city. The school had originally been secular but once news of her entrance to Catholicism spread, several girls were removed from her school. It was then Seton, and two other young women who helped her in her work, began plans for a Sisterhood. They established the first free Catholic school in America. When the young community adopted their rule, they made provisions for Elizabeth to continue raising her children.

On March 25, 1809, Elizabeth Seton pronounced her vows of poverty, chastity, and obedience, binding for one year. From that time she was called Mother Seton.

Although Mother Seton became afflicted with tuberculosis, she continued to guide her children. The Rule of the Sisterhood was formally ratified in 1812. It was based upon the Rule St. Vincent de Paul had written for his Daughters of Charity in France. By 1818, in addition to their first school, the sisters had established two orphanages and another school. Today, six groups of sisters can trace their origins to Mother Seton’s initial foundation.

Wonderful history. So unfortunate the good works of so many are now being drowned by those who do so little.

They’re going to ‘drown’ us out, and I mean that literally.

We’ve got to split with them.

I didn’t know about her, thanks for educating me.

Her life was very complex – few imagine a woman Saint to have children. She faced great difficulties in establishing a Catholic organization in Maryland (a “Free State” for religion), and became an icon. Please visit the St. Elizabeth Ann Seton Shrine in Emmitsburg, MD; you don’t have to be Catholic to appreciate this bit of history. As a bonus, her successors were nurses treating the wounded soldiers in the nearby Battle of Gettysburg.