CNN Reports Man Arrested Trying to Enter DC With Gun, Turns Out He is a Security Guard

CNN Reports Man Arrested Trying to Enter DC With Gun, Turns Out He is a Security Guard

“said he’d been working as a security guard in D.C. when he got lost and stopped to ask for directions” 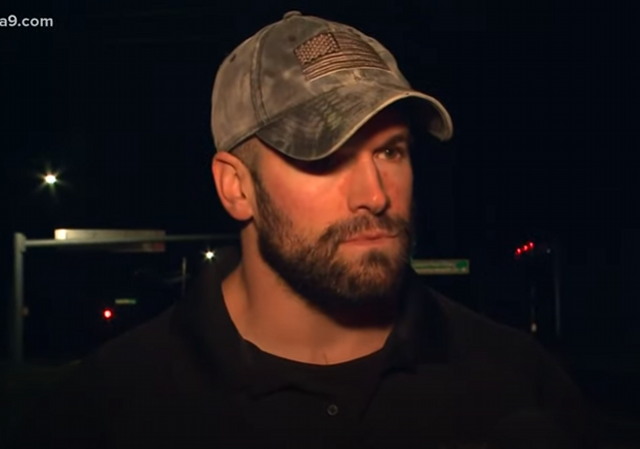 Amid the massive security in Washington, DC, ahead of Joe Biden’s inauguration, CNN reported that a man was arrested trying to cross a checkpoint with a gun and hundreds of rounds of ammunition.

Sounds scary doesn’t it? It’s a pity that CNN couldn’t wait for the whole story.

This is how CNN’s Jim Sciutto described it on Twitter: 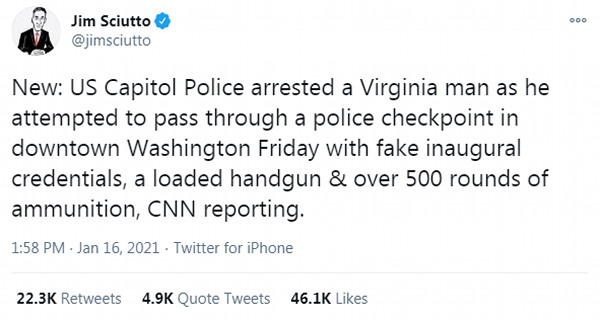 Carol Leonning of the Washington Post followed up with this clarification:

Folks: That man who drove into DC with a Glock and 500 rounds of ammo — his wife tells me he was a private security guard and hired to help secure the Capitol grounds. He's charged with carrying all that firepower into DC without a proper permit. https://t.co/Wo6hNLhJzR

Byron York of the Washington Examiner provides the side by side:

On the left, the original, scary story. On the right, the story. pic.twitter.com/VLiHJA6vQR

A Virginia man who showed police a “non-government issued” inauguration credential at a checkpoint along the perimeter securing downtown Washington, D.C. ahead of Inauguration Day was arrested after a gun and hundreds of rounds of ammunition were found in his vehicle, police said.

Meanwhile, Wesley Allen Beeler, of Front Royal, says he made an honest mistake.

Beeler pulled up to a security checkpoint at North Capitol and E streets Northwest about 6:30 p.m. Friday in a white Ford 150 truck with Virginia tags and gun-related decals, according to U.S. Capitol Police records.

Beeler said he’d been working as a security guard in D.C. when he got lost and stopped to ask for directions. He said he provided police with an inauguration placard he was given for the security job and had used several times before.

Authorities didn’t detail what Beeler provided, but when the credential didn’t match up with a list of people authorized to enter the perimeter, police investigated further…

A gun with a high-capacity magazine inserted and ammunition were found in the vehicle, police said. The gun was not registered in Washington, D.C., police said.

“I forgot that I had my weapon in my vehicle. You know, I’m a Virginia resident who has licensing and training in the state of Virginia for this firearm,” Beeler said.

It’s a pity they didn’t have security like this for Trump’s 2016 inauguration when leftists assaulted people and lit cars on fire.

Narrative engineers will have to find another target. If they can’t find one they will just have to invent one.

I guess, like the cities did with Richard Jewell, and with Randy Weaver.

NO they won’t. They just won’t correct their mistake and let all of their congregation of liberal hacks go on believing it happened as they reported it.

Last thing anybody needs right now is more incompetent security guards anywhere near any capital building. He should have known better, or stayed in front of his TV.

Sadly, there’s truth to this.

“I forgot that I had my weapon in my vehicle. You know, I’m a Virginia resident who has licensing and training in the state of Virginia for this firearm,” Beeler said.”

Any licensed owner who’s been “trained” for more than about 90 minutes knows that this s*t excuse never flies over state lines, particularly blue state lines. Shaneen Allen had her life upended because of this, and she made no particular claims to any “professional” capacity.

And let’s not even talk about the hunters and other gun owners who “forgot” (or never even realized) they had a live round of ammo bouncing around somewhere in their truck as they went over a bridge to Mexico. You can say, “well, that’s Mexico, it’s another country, where our constitution doesn’t apply,” but gun owners realize that there are at least a half dozen equivalent states inside the US where the constitution doesn’t apply for them.

While sympathetic that “I forgot I had it with me” is not a good excuse, at the same time I have upon several occasions forgotten that I have my pocketknife with me. I’ve been carrying a knife in my pocket for 65 years, and it truly is not foremost on my mind. I can see a guy having a gun in his truck and, while not forgetting that it is there but that it isn’t foremost on his mind.

One aspect of these stories that always gets me is when they talk about 500 rounds of ammo like it equates to 500 dead bodies. Anyone who enjoys shooting sports knows that it’s easy to go through 100-200 rounds at the range. (Well, that was before a 100 round box of Winchester white 9mm went from $20.00 to $119.99.) And heaven forbid it be a story about someone whose home was searched and they found a thousand rounds!!! Five trips to the range!!! Oh Lordy!!!

Expect this guy to be prosecuted into poverty. He became the target of the DC Two Minute Hate, and cannot be permitted to escape with a dime.

For years we have seen ordinary people get caught with firearms at TSA checkpoints. They were not terrorists nor were they attempting to “sneak” the firearm onboard the aircraft. They were just clueless.

For years I have attempted to teach people the proper mindset for owning a personal firearm. People have to treat personal weaponry, especially personal firearms, not as tools or toys, but as a special article which should be important to them. They should know where the weapon is at all times, as one of the reasons for having it is for personal protection. It should never be out of a person’s control, as it is dangerous if misused or used carelessly. And, you never leave one, for any length of time, in a vehicle. Vehicles are easily stolen. And, you clean and lubricate a personal weapon after every use. And, you secure it. when not in use. If this gentle man had followed these simple rules, he would not be looking at the distinct possibility of becoming a convicted felon.

But, many people treat personal firearms like a hammer or screwdriver, or a toy that they take to the range occasionally and play with. They leave them in bags, in vehicles, sitting on furniture and in unsecured drawers. When this happens, bad things follow, sooner or later.

The most important survival tool that a person has is his or her mindset. Unfortunately, it also sometimes the least used.

The Democrat Propaganda Organization looking for boogeyman under every story to propagate the narrative of a ” right wing” armed takeover justifying the arming of DC.

Around half a million assembled to back the President in audit the vote in several jurisdictions. Several hundred present at the Capital. Several dozen, who may or were not “Trump supporters”, protesting.

One unarmed woman who was obviously a clear and progressive threat aborted in a shoot to kill event. #AshliBabbitt #RIP

The Left is making absolutely sure there is not a single word of protest uttered by a conservative within 20 miles of China Joe when he takes the oath.

Compare and contrast with all of the mostly peaceful protesting throughout DC when Trump took the oath in 2017. And all of the cries of illegitimate thrown his way. Including by elected Dems and the MSM.

If you are conservative you no longer live in a free country. You are now, at best, a second class citizen.

And soon 11+ million illegal aliens will be made first class citizens. And any who oppose the Left will learn to keep their mouth shut.

We know what happens to second class citizens, don’t we:

Who would accept the contract for an unarmed guard in the middle of this shit show? His employer, MVP protective services, obviously doesn’t give a damn about their employees.

While on a business trip to Massachusetts, years ago, after a drive from my home in Vermont, I was stirred by hotel security. They asked me if I had a gun. An odd question, seemingly out of the blue. My reply was yes but not here and why would you be asking me if I had a gun? It turns out that I didn’t have my hatchcover set in place and the paper plates that I used for targets and a few ammo boxes with my brass was visible in my car. I do not remember if I had any live ammo which I later learned could be a violation. Security told me to cover up the hatch and all was good. Since then I was always double careful when leaving Vermont especially since my office was in NYC. I fully understand the security guards predicament.

Here in Sweden, it is not a problem as I have not gone through the lengthy but straightforward and painless process to obtain rifle and handgun permits. Perhaps one day.

Similarly, One day I realized that I had been flying for years here in Europe and the USA after 9/11 with a silly credit card tool kit in my wallet that has a toothpick, tweezers, compass and a knife which my grandmother gave me years prior to my hair turning all gray. That thing had been through the x-ray and security at the airports so many times that I could not even hazard a guess. No more, that thing does not travel with me any longer.

Ladies, this is why men do not stop and ask for directions.

So. He was carrying legitimate, but non-government credentials to be in the area for a legitmate job. However, he WAS carrying a weapon and ammunition that he was not supposed to have with him for the job that he was hired to do. “I forgot” doesn’t fly, I don’t care who you are. In this climate, that is just being stupid. Yes, the Leftist spin is misleading, but don’t try to spin it here too. The arrest sounds legit, given the full set of circumstances.

Ignorance of the law/rules of the moment are no excuse. /sarc

I hope that his error can be overlooked, but considering the tone in DC, I’m not hopeful.

Sorry if that was a bit off topic, I just watched it last night and thought it was very enlightening.