“Free speech is sacred, and tenured academics like Eastman have the privilege of speaking their mind without fear of repercussion. But Eastman abused that freedom.” 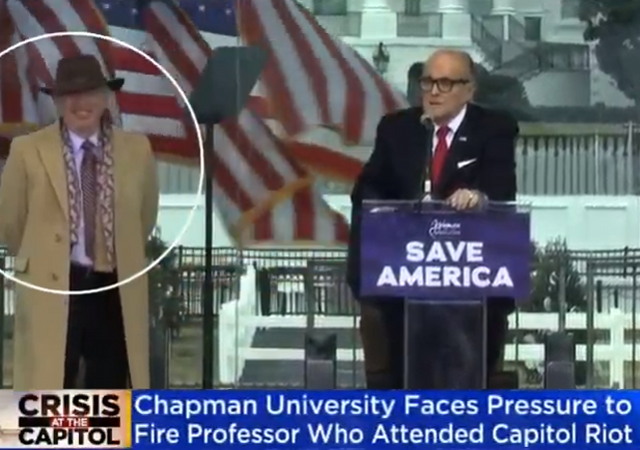 Eastman was not part of the group that stormed the Capitol, but his employer is now being pressured to fire him.

Chapman University is facing pressure to fire a professor who spoke at the pro-President Donald Trump rally in Washington, D.C. just hours before violent rioters stormed the Capitol building.

Controversial Chapman University law professor John Eastman appeared on stage with Trump’s personal lawyer Rudy Giuliani at a “Stop the Steal” rally on Jan. 6, where they urged his supporters to head to the Capitol.

In response, over 150 Chapman faculty members signed onto a letter calling on the university to fire Eastman.

“Eastman spouted lies about ‘secret folders’ to fire up an angry crowd and stood approvingly next to Rudy Giuliani as he called for ‘trial by combat,’” the letter read. “These conspiratorial claims of a stolen election were the basis of the insurrection.”

More than 140 members of the faculty at Chapman University signed a letter sent to the Los Angeles Times demanding the firing of Eastman. Via Yahoo News:

To the editor: Last month, 159 Chapman University faculty members signed a statement of outrage that law professor John Eastman was using his university credentials in a spurious lawsuit before the U.S. Supreme Court. At the time, we did not call for his ouster.

But his actions Wednesday that helped incite a riot against the U.S. government put matters into a different realm. They should disqualify him from the privilege of teaching law to Chapman students and strip him of the honor of an endowed chair.

Eastman spouted lies about “secret folders” to fire up an angry crowd and stood approvingly next to Rudy Giuliani as he called for “trial by combat.” These conspiratorial claims of a stolen election were the basis of the insurrection.

Free speech is sacred, and tenured academics like Eastman have the privilege of speaking their mind without fear of repercussion. But Eastman abused that freedom. Consider the 1969 Supreme Court decision in Brandenburg vs. Ohio (1969), which provides broad protection for speech except that “directed to producing or inciting imminent lawless action.”

On this basis, we call on Chapman’s faculty senate, president, provost and law school dean to promptly take action against Eastman for his role in the events of Jan. 6.

Any failure to act by the university would hurt the careers of all faculty, alumni and staff at Chapman. Our research could be associated with extremism thanks to Eastman’s actions.

Funny. No one in academia seems concerned about being associated with the extremism of Black Lives Matter or Antifa.

On Friday, I issued a statement regarding the unrest in Washington, D.C. and the role a member of the Chapman faculty, John Eastman, played in the events of the week.

The responses I have received indicate to me that I have failed to make clear the reason for what many have called ‘inaction’ or ‘cowardice,’ or even ‘racism.’ I will try to explain my position in more detail.

Just a few months ago, when the impeachment of President Trump was the center of our attention, we all repeated an important mantra: “Not even the President is above the law.’ For most of us, this is a very important statement because it says that we all are indeed equal under the law, even the most powerful person in the country. Even the President must respect the law.

I now find myself asked by many to violate exactly that statement. I am not the Emperor of Chapman University, nor I am the Supreme Leader of Chapman University. I am the President of the university, and as such, I am bound by laws and processes that are clearly spelled out in our Faculty Manual. The Faculty Manual, despite its common name, is actually a contractually binding document that faculty, administration, and Trustees have agreed upon. This document contains the rules that determine how faculty are hired, and how they are disciplined, up to and including termination. The documents spell out cases under which such actions can be taken, and what process must be followed. The process includes a prominent role for the Faculty Personnel Committee and affords the faculty under discipline a process, and the right to grieve the decision in multiple settings.

American taxpayers should not be expected to fund higher education as long as half of America would not be welcome on a college campus.

“…but his employer is now being pressured to fire him.”

Golly. It’s like that whole ‘tenured’ concept is simply a cudgel of bullsh!t to be wielded from only the left hand.

“But Eastman abused that freedom.”

The only abuse here is by Struppa and the other riff Raff. Maybe there should be a lawsuit.

We are entering a dangerous era when merely speaking, or being somewhere, that’s not approved by the left will get you fired.

Don’t forget: having said something thirty years ago that is not approved now

Do not forget that this horse crap started with crucification of George Zimmerman and Officer Wilson, and NONE of the people involved have been brought to justice. This is what comes from standing by and allowing such to happen. Today it is the President.

Many years ago I came in contact with a mostly Democrat operative known as Dr. Dirt, maybe I should look him up and find out if he has walked away from Dems?

Maybe the 140 should be terminated before they contaminate more of our youths.

What form of termination are we talking about?

Maybe they should end up on a blacklist.

The narrative is now fixed. Free speech and no legal (or even close) incitement to riot means termination.

It was “reckless” because the classic peaceful demonstration was superbly converted into a riot by well trained agents provocateur. No riot.. not reckless. With street intel of flyers to recruit riots in the mix for weeks… DC mayor reduces enforcement presence, Capitol police decline FBI and other coverage..just primed for this. Yes, preaching to the choir but I wish we had more evangelists out there. I’d add the administration staff for badly underestimating the impact that this had for EVERYTHING.

The failure must be totally covered over except for Trump. As the information comes out and the people transition from out of shock/depression… if allowed…. this will be seen as a important moment stolen again. My hope is that a real investigation will come about but even those like Glenn Beck say “no Antifa” while those there is experience saw them everywhere.

Both Antif and BLM deserve to be eradicated. Today I look at McCarthy in a new light, where is our McCarthy today?

Abused his right to free speech?

What a piece of crap

People, DO NOT SEND YOUR CHILDREN TO THESE HORRIBLE UNIVERSITIES!!!!

Glenn Beck has always been a fraud

Yup, free speech is sacred, until you exercise it in a manner we don’t like, then you are unclean and guilty of “abusing” it.

Those you think deserve it the least are the ones who need it most. Don’t be conned into making an exception for the scoundrels. You’ll wake up one morning to find out the definition of scoundrel just broadened to include you.

Please tell me why President Trump does not Fore Wray

He is about to put Capital protesters on no fly list, they want to add any senator or congressmen that supported stop the steal certification

If he could do it over I bet Trump would fire a lot of people he put up with long after he realized who and what they were.

On his way out the door I hope he declassifies everything related to the Russian hoax. And fires anyone who tries to obstruct that.

“”I hope he declassifies everything related to the Russian hoax.””

He already tried that. His DOJ and FBI refused to comply. He didn’t do anything then, so why would he do anything now?

He doesn’t need their permission. Classification is entirely in the president’s hand. If he says a document is declassified, it’s automatically declassified.

I bet that BLM and Antifa are responsible for more deaths than we know about.

The Dems and their media allies claim the election was not stolen. That it was totally legitimate.

So why are they behaving exactly like people who have stolen an election would behave?

Dems are working their way up to Muhammad like policies.

I am a retired federal agent I have set at tables and watched defense attorneys try to say they had proof of this or that. If he says he has a file he needs to produce the file. However, those that oppose him need to produce their receipts as well. I read a fact check the other day from USA Today that was calling a report false.Here is the rub, the fact-checkers ruled it false because the report incorrectly stated an individual was part of a board of directors and they said there was no record of the individual on the website. The fact-checkers did not dispute any of the other accusations in the writing. People need to wake up a see how they are being manipulated.

Not being on a web site doesn’t prove someone is not on a board. The web site may not be up to date, or it may have been altered after the report was published.

They are of course ALSO going to fire all the academics who participated in BLM/Antifa activities where violence and property damage occurred.

I am bound by laws and processes that are clearly spelled out in our Faculty Manual…snip…The Manual does not allow me to decide on my own that any faculty is a criminal or that they should be disbarred and therefore fired, which is what I am being asked to do.

It is not your own commitment to free speech that stays your hand: rather, it is that pesky Faculty Manual?

Claiming that there is a piece of paper directing you, and therefore absolving you, was rejected at Nuremberg 75 years ago. It is no less loathsome today.