Sicknick is remembered by friends and family as a “good person” who “wanted the best for everyone around him” and who “dreamed of being a police officer.” 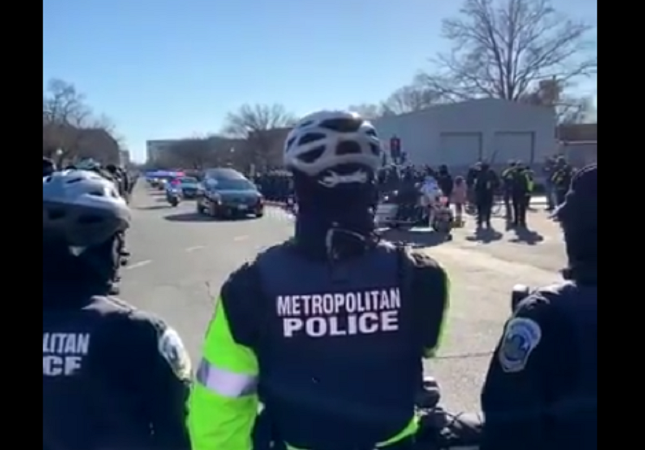 Kemberlee blogged on Friday that Capitol Police Officer Brian D. Sicknick died. According to a Capitol Hill Police release, Sicknick “passed away due to injuries sustained while on-duty. . . . [he] was injured while physically engaging with protesters. He returned to his division office and collapsed. He was taken to a local hospital where he succumbed to his injuries.”

Due to his passing, flags are flying at half-mast at the White House, throughout DC, and at other federal locations.

His funeral was held Sunday in DC.

The hearse of Officer Brian Sicknick passing the Capitol. pic.twitter.com/xOT81sqave

Sicknick is remembered by friends and family as a “good person” who “wanted the best for everyone around him” and who “dreamed of being a police officer.”

Family members say he dreamed of being a police officer. One of his former New Jersey National Guard comrades told Fox 29 that he was in disbelief when he heard the news of Sicknick’s passing.

“I don’t think Brian had a nasty bone in his body. He just was a good person and wanted the best for everyone around him,” Chief Master Sgt Lance Endee said. “When you are told he died such a horrible death, I was very sad about the whole thing.”

Speaker of the House Nancy Pelosi directed flags at the Capitol to be flown at half staff to honor the Central Jersey Native, from South River. He served 6 years in the New Jersey Air National Guard, as a leader of the 108th Security Force Squadron.

“He really optimized the air force core value of service before self,” Endee said.

They also served together overseas. Endee shared a memory from their deployment: “Brian just always had a great outlook on everything even though we were putting in long days and fatigued and hungry. And Brian just always tried to lift everyone’s spirits with a little wisecrack or something like that.”

There has been a GoFundMe page set up for his family.

I keep hearing “horrible death” and such. Was a cause of death ever released? What did his family say about it?

There are many rumors, but they are unconfirmed (and it didn’t seem appropriate to discuss rampant social media rumors and lies in this post). No official cause of death has been released that I am aware of, nor has his family said anything about the cause of death (they may not know at this point, either). If and when something confirmed is released, we will post it.

Quotes from the family indicate a brain anurism. They also mention that he said nothing about being injured. He did mention getting pepper spray in his face serveral times though.

The family also seems to have stopped talking and asked that his death not be politicized. Mainstream press are doing what they do, and .. just seems very odd overall.

The fact that there are so many stories out there (he was dragged around and mauled by a crowd, he was beaten with a fire extinguisher, and on) suggests to me that it was not a murder, but we don’t know. He could have been banged on the head and then had a stroke/aneurysm when he got back to his office; he could have had known medical conditions; we just don’t know. That we don’t know makes the whole thing suspect in my book. His death was announced hours before it even happened. It’s all just very strange.

“…he could have had known medical conditions;”

If so, he should have been assigned or limited himself to duties in conformance to this known condition that did not put him at risk. People do ignore their health and known associated risks. We do not know if this was the case in this instance and I am not implying it is, but as a general and perhaps unrelated public service announcement, heed your medical condition and do not do things that put yourself at unnecessary risk. If you are 50, remember that you are no longer 25, and such.

Men over 50 are three time more likely to become wounded in combat and three times as likely to die of their wounds. That’s why the military transitions men in the 40’s towards desk jobs. Most people just can’t take the wear and tear after their thirties.

If this had been a suspected murder or manslaughter there should have been an autopsy to establish the cause of death to forensically support charges against whom ever attacked him. If there is no autopsy it is very unlikely that criminality is suspected as a cause or contributing cause of his death. Given how rapidly he was buried lends support to the idea no autopsy was performed, that, and no such announcement of one one, nor its results have been made public.

Without further evidence, I would say the man’s death is being grossly politicized and mischaracterized.

May the truth come out and may he rest in peace.

Autopsies are usually done within a day or two of the death. This was actually the procession carrying his body from the medical examiner to the funeral home.

I am sorry for his death. My condolences and prayers to his family. Thank you for his service.

he went back to his office and had a stroke. That was reported days ago and the union chief said so. Most articles tried to make it sound as if he was a harmed by protesters so they skipped pretty much all details other than to say that he was at the protest and then died. It’s all bullshit.

Of course, they recorded two heart attacks and one stroke among the protesters and are counting those as “riot deaths”, too, so it’s clear have ridiculous they are being – not unlike their COVID death counts.

Many of the reports of the officer going back to his office and then having a stroke, after which he was then taken to the hospital, are disappearing … as will happen these days. But you know full well that if there were any video of him being beaten by anyone or anything even close the MSM and the dems and all the America-haters would give every single detail and would be playing the video on a loop until 2025 (or until they’ve silenced the last conservative).

“I was very sad about the whole thing.”

I agree it is sad, it is also sad that his death is being used as propaganda, and it is no more sad Ashli Babbitt.

Thoughts and prayers for the family. It brings it all into perspective. The arguments seem pointless now considering the loss of life. Here’s to hoping some sense of reason can be found over the next few weeks to allow everyone to calm down.

Ok, this is off topic… Has anybody heard about the Capitol cop that committed suicide? Seems he was there during the ‘event’, and committed suicide in the last day or so. They released his name (which I don’t remember). Just wondering if it was the cop that shot and killed the woman vet.

I don’t think it was a cop that killed Ashli.

I wonder if it was the cop that knocked a guy off the steps for a double digit feet fall.

2nd time I’ve read about a double digit fall. Got any first hand sources for that?

It would seem we may never know except that President Trump is guilty of further sins. Having seen revisionist interpretation of anything Trump said it doesn’t really matter what the truth is. Sad for family no matter what.

The time for heeling is upon us all. My “sins” are so great re-education will be in the 500 series …graduate level reprogramming. Gone are the days of “my fellow Americans”.

So NOW Demorats and the media (I repeat myself) are concerned about a policeman dying?!?! You really cannot make this fucking bullshit up.

Typical dem BS. They are evil and there are absolutely no limits to their vicious depravity. They are constrained by nothing – not logic, not common sense, not reality or anything. They are looking to do things that would make Stalin envious.

Where is the funeral procession and flags at half staff for Ashli Babbitt?

This officers death was not as a result of injury from the mostly peaceful capitol hill protest.

We are subjected to propaganda on a daily basis. Don’t fall for it.