BREXIT Champion Nigel Farage: “25 years ago they all laughed at me. Well, they’re not laughing now.” 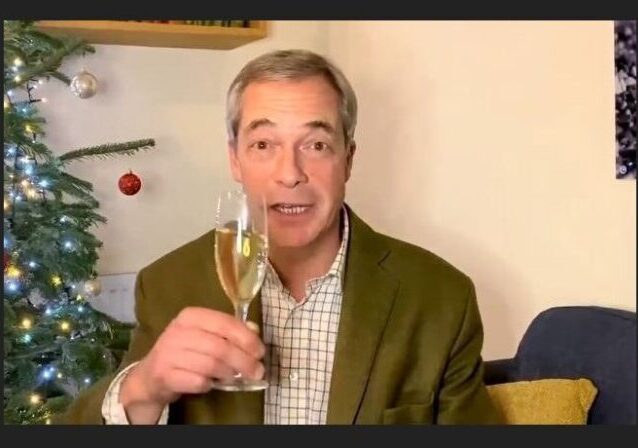 Four years after the British people voted to leave the European Union, the United Kingdom is finally free to follow its own destiny outside the 25-member bloc. On Thursday night, the island nation formally separated from the EU after an 11-month Brexit transition period.

“A new era has begun for the United Kingdom after it completed its formal separation from the European Union, the BBC commented. “The UK is now free to pursue independent trade policies for the first time in more than four decades,” UK’s Daily Telegraph noted.

The celebrations were muted amid a hard lockdown in place to tackle the second wave of the Wuhan coronavirus pandemic. Britain “left the EU’s orbit on Thursday night in a departure that was notably low key,” the left-wing newspaper Guardian wrote.

Prime Minister Boris Johnson, who campaigned to leave the EU ahead of the 2016 referendum, hailed the historic day when Britain’s regained its sovereignty from Brussels. “This is an amazing moment for this country,” Johnson said in his traditional New Year’s message. “We have our freedom in our hands and it is up to us to make the most of it.”

There will be no triumphant scenes, such as those in Parliament Square marking the UK’s political exit from the EU back in January, but Brexit supporters are determined to mark the moment the long, messy process finally becomes real on New Year’s Eve.

Four-and-a-half years on from the referendum, Britain will exit the EU’s single market and customs union at 11pm on Thursday night.

In no mood to find fault with the last-minute trade deal struck by Boris Johnson, Brexiteers told The Independent they will happily celebrate the final outcome at home.

Former UKIP deputy chair Suzanne Evans – a former favourite of Brexit figurehead Nigel Farage before the pair fell out – said her own festivities will involve a bottle of “the beautiful Winbirri English sparkling wine”.

Lance Forman, a former Brexit Party MEP, has thought very, very carefully about his choice of drinks to mark the big moment at 11pm. “I shall pour myself two glasses of fizz – one French champagne and the other English sparkling. First, I shall drink the French to say goodbye and then the English, to say hello.” (…)

What about the Brexit Party’s leader? Mr Farage was quiet on his plans for New Year’s Eve. His unwillingness to kick up a stink about the trade deal has helped set the tone for No 10 over the past week, and he said Brexit supporters are entitled to “celebrate” their victory (despite his own preference for a no-deal crash-out).

On Thursday, the UK parliament overwhelmingly approved a last-minute trade agreement reached with the EU on the Christmas Eve.

The leading Brexit campaigner Nigel Farage has backed the trade deal negotiated by Prime Minister Johnson’s government. “The deal is not perfect but it is a big moment,” Farage said in a video message. “However unhappy I might be about some of the detail, in 100 years time, kids in school will read that the people beat the politicians,” he added.

25 years ago they all laughed at me.

We owe the UK a lot for their bravery.it’s high time somebody somewhere knocked the EU down a peg or two. we all must fight these liberal-socialist organizations that want to tell the whole world what to do. well the UK told them good, stay out of our business.

Honestly it’s a massive fuck up. The arguments for and against Brexit have raged but it’s been drowned in ignorance and stupidity. I think unfortunately the phrase lions led by donkeys is far to true.

They “victory” wasn’t complete as the UK could have kept more of its original sovereignty it had before entering the EU. A hard Brexit would have been better. Maybe the USA under Harris can join the EU and lose its identity in the future goal of a nationless Union.

“Honestly it’s a massive fuck up.”

You don’t have an honest bone or thought in your body.

Really is that the best you can do, I respond to arguments. If all you can do is throw baseless insults you are proving to me that you have nothing.

@mailman , I thought about the arguments for and against and the conclusion I came to was that Brexit was a bad idea. You know why, because the Tory party is full of idiots. Morons like Jaboc Rees Mogg prove time and time again that the Tory party are self serving , stupid and ideological. Why would I vote for the most significant event in our life time to be carried out by morons.

Jolly Good to you Nigel and all of Britain.

“We have our freedom in our hands” he says while his countrymen are under house arrest, because the freedom fighter politicians at home decided that would be the best for everyone.
I’m not sure that they’d fare better in the EU, but they certainly don’t seem to fare better out of it, either.

The irony is their national anthem goes somethings like this: “Britons never will be slaves”

That’s “Rule, Britannia.” Their national anthem is “God Save the Queen.”

Signing “Rule Britannia” is no longer done on BBC Prom Night… just instrumental. Too much “nationalism” for the BBC.

Can they unlock now, too?

How much of this Brexit is real? I’ve noticed a media blackout on the actual terms that Boris accepted.

There are some summaries of what was agreed but no detailed analysis as far as I’m aware. Its a big agreement and probably very legalistic so I suspect the devil will be in the detail.