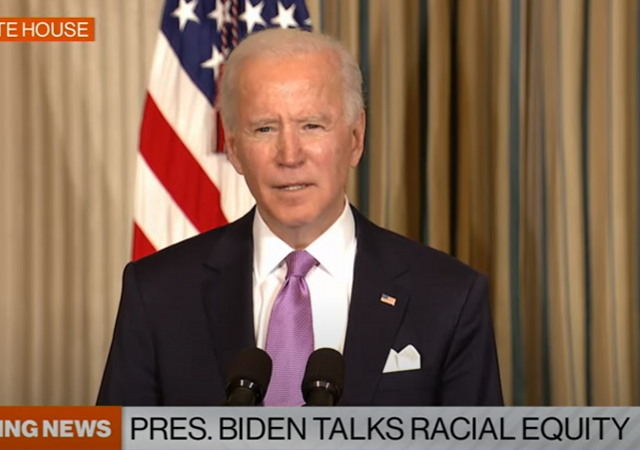 Joe Biden delivered some remarks on systemic racism and racial equity, which included the suggestion that the Trump administration banned diversity and sensitivity training.

Professor Jacobson wrote a detailed post about this back in September which included the full memorandum:

September 4, 2020
M-20-34
MEMORANDUM FOR THE HEADS OF EXECUTIVE DEPARTMENTS AND AGENCIES
FROM: Russell Vought, Director
SUBJECT: Training in the Federal Government

It has come to the President’s attention that Executive Branch agencies have spent millions of taxpayer dollars to date “training” government workers to believe divisive, antiAmerican propaganda.

For example, according to press reports, employees across the Executive Branch have been required to attend trainings where they are told that “virtually all White people contribute to racism” or where they are required to say that they “benefit from racism.” According to press reports, in some cases these training have further claimed that there is racism embedded in the belief that America is the land of opportunity or the belief that the most qualified person should receive a job.

These types of “trainings” not only run counter to the fundamental beliefs for which our Nation has stood since its inception, but they also engender division and resentment within the Federal workforce. We can be proud that as an employer, the Federal government has employees of all races, ethnicities, and religions. We can be proud that Americans from all over the country seek to join our workforce and dedicate themselves to public service. We can be proud of our continued efforts to welcome all individuals who seek to serve their fellow Americans as Federal employees. However, we cannot accept our employees receiving training that seeks to undercut our core values as Americans and drive division within our workforce.

The President has directed me to ensure that Federal agencies cease and desist from using taxpayer dollars to fund these divisive, un-American propaganda training sessions. Accordingly, to that end, the Office of Management and Budget will shortly issue more detailed guidance on implementing the President’s directive. In the meantime, all agencies are directed to begin to identify all contracts or other agency spending related to any training on “critical race theory,” “white privilege,” or any other training or propaganda effort that teaches or suggests either (1) that the United States is an inherently racist or evil country or (2) that any race or ethnicity is inherently racist or evil. In addition, all agencies should begin to identify all available avenues within the law to cancel any such contracts and/or to divert Federal dollars away from these unAmerican propaganda training sessions.

The President, and his Administration, are fully committed to the fair and equal treatment of all individuals in the United States. The President has a proven track record of standing for those whose voice has long been ignored and who have failed to benefit from all our country has to offer, and he intends to continue to support all Americans, regardless of race, religion, or creed. The divisive, false, and demeaning propaganda of the critical race theory movement is contrary to all we stand for as Americans and should have no place in the Federal government.

BIDEN: "I’m rescinding the previous administration’s harmful ban on diversity and sensitivity training and abolish the offensive, counterfactual 1776 commission. Unity and healing must begin with understanding and truth, not ignorance and lies." pic.twitter.com/75Ul3tLWqu

This is a fair assessment:

He's reading words, he has no idea what they mean. https://t.co/2RQfsgjn8m

This is also a good point:

Yet he supports @harvard's prejudice against Asian Americans in admissions.

So, take that for what its worth. https://t.co/U9szdXUSfs

You can watch his entire speech below. The entire address sounds like it was written by Black Lives Matter activists. He talks about the death of George Floyd and all that followed as a turning point in civil rights history and frames the entire incident at the Capitol as an attack by white supremacists.

If it wasn’t already clear that Biden is fully embracing social justice as a driver of policy, it certainly is now.

“BIDEN: “Today, I’m directing federal agencies to combat the resurgence of xenophobia, particularly against Asian Americans and Pacific Islanders, that we’ve seen skyrocket during this pandemic.”
———-

What is corrupt, dim-witted, tottering, feeble, Chinese-communist installed puppet/marionette/dotard/vassal, Chairman “Big Guy” Xi-den’s evidence to support this accusation against Americans? I’ve read of some isolated incidents, but, nothing that would remotely constitute grounds to accuse Americans of an alleged “resurgence” of “xenophobia” against Americans of Asian descent since the Wuhan virus arrived on our shores.

As usual, this is typical Dhimmi-crat slandering of the entire citizenry, without evidence or cause. This is utterly vile stuff.

….seen skyrocket…yah not one scintilla of evidence of that but..

And “Pacific Islanders”? Yeah, I’ve been very insensitive to people from Tahiti.

Given Biden’s mentorship relationship with the Exalted Cyclops of the KKK, and his many insensitive remarks, including quite recent missives, concerning various minorities, perhaps he should be first in line to this training. However, I find it offensive that just because he has a history of offensive remarks and opinion, that I, or anyone else should be presumed to hold the same.

And, accusing POTUS Trump of banning “Diversity” training — another brazen and bald-faced lie. “Critical Race Theory” is a racist and divisive indoctrination tool contrived and proffered by black neo-communist racists/radicals/supremacists, and, their propaganda was appropriately banned from the government under Trump, and, should remain banned.

I’m thinking that Xi and the rest of the Chinese communist Party apparatchiks must be rolling on the floor, laughing at their success in installing this idiot in the White House.

Don’t forget Soros. And, he is probably making money from all this.

Laughing, perhaps, after reaching a consensus with their Western ideological counterparts, the CCP has progressed from The Great Leap (i.e. planned population) to one-child (i.e. minority choice) to selective-child (i.e. delegated responsibility) and concentration/re-education camps for their deplorables under liberal rubric a la “rape culture”. The diversity racket is part of this multi-trillion dollar sociopolitical complex to force people to kneel in order to consolidate capital and control.

Well of course he did. If you are wondering if Biden will take a particular action just ask yourself…will it be bad for America and Americans and speed the destruction of this country. If yes then that’s what they will do.

Those promoting Critical Race Theory are simply trying to whitewash that they are collectively dull, racist and have the highest crime rate of any group in America.

MLK wanted all people to be judged based on their character and capabilities. That was a laudable goal.

Unfortunately, implementation was flawed because black failure to succeed was NOT based one just poor environment, much of it, most of it was driven by low intelligence. Rather that admit that, and address the problem on that basis, they dumbed down requirements for degrees. Today everyone except white males are entitled to unearned degrees.

Yeah, folks who have been subjected to both can easily see the difference.

I don’t think the propaganda assist from the MSM can cover up the difference between:
1. traditional Equal opportunity training – basically MLK’s ‘I have a dream’, don’t intentionally PO people, keep your hands to yourself, ECT

Sort of like the school closings for Rona. Those affected know it’s BS at this point. They are increasingly loud in demands to stop the BS and open the schools.

Theorizing in an academic article about CRT is fine. That is what the academy is for; presenting and debating ideas. Put into practice and folks impacted see and feel the impact of poorly reasoned theory. They push back hard.

Yeah, well, I’m gonna be as insensitive as I like, mmm-kay? None of these CRT promoters appears to be sensitive to my needs anyway.

“I mean, you got the first mainstream African-American who is articulate and bright and clean and a nice-looking guy. I mean, that’s a storybook, man.”

All politicians have most of the cited traits, except for intelligence. Both Biden and Harris come up short there.

Mid anything, this crap has caused me to feel uncomfortable around people of color where once I did not

I will never bend a knee

Critical Race Theory is utterly revolting stuff. Not only are they indoctrinating government employees in this crap, but they are forcing it on government contractors as well.

If Federal employees have time for this nonsense it’s time to lay off some federal workers.

Amen, Amen. You could fire 2 out of every 3 and nothing would change.

At least 40% are deadwood which should be culled.

Even my buddies who work for the Federal Government even say 20-25% don’t bother to show up to work consistently and still get paid and promoted. 40% basically do nothing when they are in office, and the contractors and the other 35% actually do some work. An incredible amount of waste in Federal budgets.

I would say a large percentage of them or signature jobs. That, and providing jobs to people who otherwise are qualified to do work. I believe a short phrase for that is “affirmative action”.

Dont worry guys, the media will be along to correct Bidens lie any second now.

Putting a twist on the famous Seinfeld take on lying… in the case of Biden, is it a lie if he has no idea what the words mean?

I dunno, but if most of his followers believe him it is mass insanity

President Trump signs an order. Fake President Biden signs an opposite one not long after.

This is a very strong argument for 3 things.

1. Rule by law, not EO.
2. Honest elections.
3. Smaller government (so the EOs have a lesser effect)

You think BLM and CRT are crazy now? Wait until Chauvin is acquitted of the most serious charges.

Critical Race Training creates a hostile work environment. Telling people that they are bad human beings for having the wron skin color only makes them mad. So CRT will do nothing but increase racial division. But then…that is the point.

People are getting lost in the woods, again. This has nothing to do with equality, equity, sensitivity or any of the other BS descriptors used. It is designed to Balkanize the American populace while diminishing the white majority to facilitate greater control of the population. It is just another means of controlling the population. And it is working, to some degree.

Remember when, back in the 30s, 40s and 50s, light skinned people of color were attempting to pass as white? Now we have red haired, blue eyed people attempting to pass as people of color [Negro, Native American, Hispanic, etc.]. Why is that, do you suppose? If racism is such a problem in this country, what is the advantage to identifying as a target of that “racism”?

It is just one more scam to control the American people.

I’m feeling more and more like I need to self-identify as an American Indian. I’m right on the borderline, unlike Liarwatha Fauxcahontas.

Obama is the man behind the curtain pulling Joe’s strings

I disagree, Obama had no power in his own right, someone created him out of nothing. They share a puppeteer,perhaps.

This is not about ‘biden’ doing anything. It is about SUSAN RICE doing it all:

This corrupt racist, Jew-hating maggot who sold out our nation so many times, and sold out the lives of American servicemen (getting themm killed – there’s no argument about Behghazi) is the de facto president.

Sure am glad we’re getting a centrist moderate like Biden. All those mean tweets from Trump were destroying the country!!

Now get on your knees and repent, Whitey.