Wolf told his colleagues that his resignation “is warranted by recent events, including the ongoing and meritless court rulings regarding the validity of my authority as Acting Secretary.” 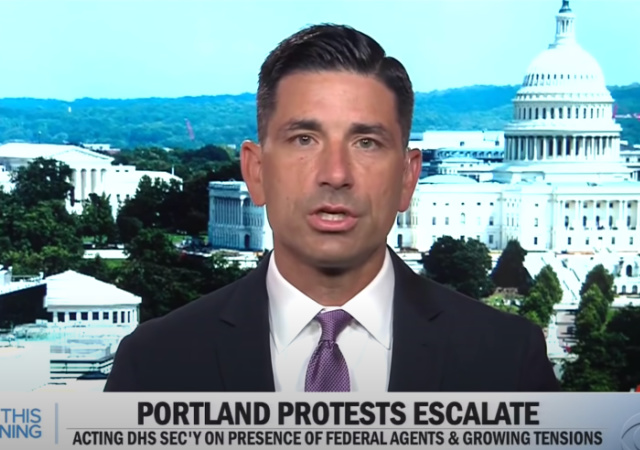 Wolf told his colleagues that his resignation “is warranted by recent events, including the ongoing and meritless court rulings regarding the validity of my authority as Acting Secretary.”

FEMA administrator Pete Gaynor will take over as Acting Secretary.

In November, a federal judge in New York City ruled that Wolf “has not been acting lawfully as” DHS secretary. Therefore, “his suspensions of protections for a class of migrants brought to the United States as children is invalid.” From The Washington Post:

The U.S. Supreme Court ruled in June that the Trump administration wrongly tried to shut down protections under the Obama-era legislation known as DACA, or Deferred Action for Childhood Arrivals. On July 28, Wolf nonetheless suspended DACA pending review.

Judge Nicholas Garaufis said court conferences would be held to work out details of his ruling.

Although President Donald Trump formally nominated Wolf for the job in summer, Wolf has yet to get a full vote in the Senate, keeping his role as “acting.” Garaufis cited the Government Accountability Office, which wrote in a report to Congress in August that Wolf was the beneficiary of an “invalid order of succession.”

The judge described an illegitimate shuffling of leadership chairs at the Department of Homeland Security, the agency responsible for immigration enforcement, for the predicament of Wolf’s leadership and that of his predecessor, Kevin McAleenan.

“Based on the plain text of the operative order of succession,” Garaufis wrote in the Saturday ruling, “neither Mr. McAleenan nor, in turn, Mr. Wolf, possessed statutory authority to serve as Acting Secretary. Therefore the Wolf Memorandum was not an exercise of legal authority.”

Wolf described the riots as “tragic and sickening.” From Oregon Live:

On Thursday, amid a spate of resignations in Washington and talk of invoking the 25th Amendment to remove President Donald Trump from office, Wolf urged the president to condemn the assault on the Capitol. Wolf, the point person for some of Trump’s most controversial crackdowns on immigration and domestic disturbances, asked “the president and all elected officials to strongly condemn the violence that took place yesterday.”

Wolf had said Thursday he would remain until President-elect Joe Biden’s inauguration in less than two weeks to ensure an “orderly transition” at the Homeland Security Department.

“These violent actions are unconscionable, and I implore the President and all elected officials to strongly condemn the violence that took place yesterday,” Wolf said. “DHS takes the safety and security of all Americans very seriously — it’s at the core of our mission to defend our homeland. Any appearance of inciting violence by an elected official goes against who we are as Americans.”

Trump did this despite Wolf siding with him when it came to left-wing violence over the summer. Mayors of leftist cities criticized Wolf and Trump when they sent in federal agents to protect federal buildings.

Never understood how a Republican POTUS couldn’t alter/end Executive Orders by a previous POTUS. I suspect that will change on Jan 20th

Trump did reverse or change quite a few Obama Executive Orders, some of which occurred on January 20, 2017.

Biden’s people are going to have a stack of EOs ready to go next week.

Nobody ever said he couldn’t reverse executive orders. I know that’s how right-wing blogs like to portray it, but it’s simply not the truth.

The problem with rescinding DACA is that the courts didn’t believe the reason given. Rule-making must follow the law, which requires a rational reason, and the reasons the administration gave for the change in the rule didn’t pass muster. Had the administration simply said we are no longer deferring action on these cases because the President disagrees with his predecessor’s policy, the courts would have had nothing to say. Policies are up to the president, not the courts.

But Trump didn’t want to say that he disagrees with DACA. His stance all along was that he supported DACA but reluctantly had to cancel it because it’s illegal. And the courts called him on his bluff. They effectively told him, “Either say your policy is against DACA, or keep it”, and he chose to keep it.

It’s widely perceived, and I agree, that courts are harder in the “soft” decisions against Trump than against Obama. And it isn’t close.

They say he doesn’t have standing in absurd ways.

And as here, they just accuse him of lying for stating facially believable reasons. That’s really unprecedented. Courts almost never try to psychoanalyze like that; it’s just an excuse to rule against, and that’s not fooling anyone.

You’re as bright as a 5w incandescent light bulb ?

One minute you’re all “Nobody ever said he couldn’t reverse executive orders. I know that’s how right-wing blogs like to portray it, but it’s simply not the truth”.

And then you immediately contradict yourself with this mindless drivel ??

“The problem with rescinding DACA is that the courts didn’t believe the reason given” ???

So in effect the courts said he couldn’t change an EO issued by the previous President ???

Tell you what nutless, do us all a favour and sit down and let tye adults talk ??

Wow, you’re in no position to talk about dim. You lack the intelligence to understand the simple fact that reversing an EO is one thing, but changing government rules is another. Government rule making is explicitly restricted by law, and must have a rational reason. Regulations are struck down regularly for lack of one. “The president has a different policy” is a perfectly good one. But the sorry excuses that the administration gave, like “The president loves DACA, but has received advice that it’s illegal, so he has no choice but to undo it”, gave the courts the opportunity to second-guess them.

I just love that an illegal program instituted thru the administrative process has to be taken down by the same process.

The courts said it wasn’t illegal.

Et Tu? Trump is probably saying that a lot these days.

My guess is he hopes that by bending the knee to the Left he’ll still have a financial future in DC.

Gleefully accepted, I hope. Chad was never well suited to executive service and has shown the content of his character, or lack thereof, for all to see.

Wolf “sided with” Trump by sending troops to defend federal buildings from riots, wow what a “Chad” he is! How brave of him.

This is a circumstance where anything else would be seen as impossible. Obviously, obviously, the fedgov gets to defend its own buildings. If this is his show of loyalty to Trump, he did nothing.

It was widely criticized as “fascist” and “unconstitutional” and all kinds of stupid things. Someone sympathetic to BLM would not have done it.

So banking now has joined the cabal to Alinsky Trump …. Using the soon to be familiar Orwellian term “vaporized”. need I say that we are now in a fully globalist achieved world?

The most insane news: none of the people arrested in Capital melee were registered on Parler. Zero. They were all on Facebook.

Seems that the FBI must use The Facebook for it’s facial recognition data base.

A man whose image went viral on social media after he allegedly stormed the Capitol last week wearing a fur outfit and police vest while carrying a plastic riot shield is now facing federal charges. Aaron Mostofsky, the son of a prominent Brooklyn judge, was arrested Tuesday at a Brooklyn home, CBS New York reported.

Likelihood of being a MAGA 0%