Unemployment Claims Fell by 75,000, But Economy Only Adds 245K Jobs in November

Unemployment Claims Fell by 75,000, But Economy Only Adds 245K Jobs in November

The November jobs report is a rollercoaster. 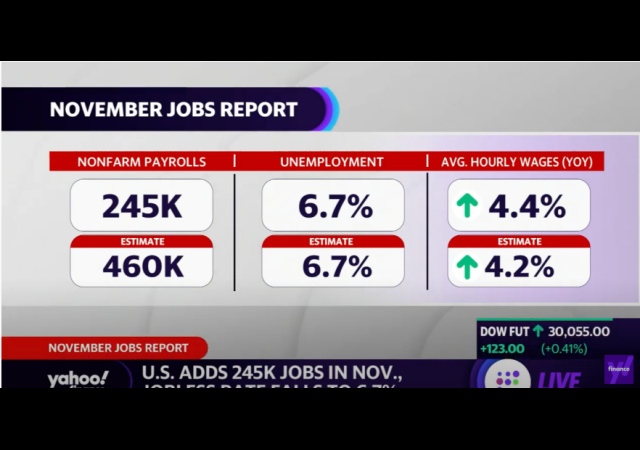 The Household Survey Data section is a complete rollercoaster. Hey, here’s some good news! But now you get bad news.

Unemployment went down to 6.7%, down from 6.9%. Not bad, right? Well, the unemployment rate for adult women declined, but the rate for other major groups did not budge or had little change.

The leisure and hospitality, the arts, food services and drinking places, mining, and information sectors hardly changed since October.

The labor market lost 22 million jobs when the pandemic started earlier this year. It has brought back “more than half” of those jobs while America’s “economy overall also has recovered much of the ground lost.”

The numbers are so confusing. The jobs report shows a very slow economic recovery, but the unemployment claims numbers increased for the second week in a row.

Thursday’s report showed continuing claims, an approximation for the number of people collecting unemployment benefits through regular state programs, which cover most workers, decreased by 569,000 to about 5.52 million for the week ended Nov. 21. That is the lowest level since March and well below a peak of 24.9 million in May—but still three times the pre-pandemic level.

The figure doesn’t precisely equal to individual workers receiving benefits because, in some cases, a single person can claim retroactive payments for more than one week of benefits, the department said this week.

The number receiving benefits through the pandemic unemployment assistance program, which is open to gig workers and others who don’t typically receive benefits, fell in the Nov. 14 week, the Labor Department said Thursday. The number receiving extended benefits because they exhausted other programs increased.

Harris will fix that. She’ll fix it good!

How can unemployment drop if the government is artificially surpressing employment by refusing to allow businesses to operate.?
Trying to make sense of unemployment when red states are in the 5 to 7% range and blue states are running 9 to 13% is impossible.

Imagine that, immediately upon “electing” a mentally ill big-government grifter who surrounds himself with a bunch of neo-Marxist twats, the business sector starts to contract immediately.

Who woulda thunk it?

How can the economy add jobs when it’s locked down and people can’t open their businesses?

“Unemployment Claims Fell by 75,000, But Economy Only Adds 245K Jobs in November”

Must be the already employed who are taking on 2nd and 3rd jobs.