Thursday I blogged about a demand letter (included beneath) sent to the city of Palm Beach and to the Secret Service, claiming Trump cannot legally claim Mar-a-Lago as his post-presidency residence. The story was widely reported by the Washington Post.

I’m sure you’ll be shocked to know that the WaPo just happened to leave out that the woman presumably behind the demand letter is also claiming that Mar-a-Lago’s security system is injuring her brain.

Gotta love The Daily Mail for this kind of story:

The explosive accusation is contained in a letter sent this week to both the Town of Palm Beach and the Secret Service, which is responsible for protecting the First Family.

It does not go into detail about the device involved but the description is consistent with the sorts of radar sensors routinely used to detect intruders at prisons, nuclear power stations and other high-risk buildings.

‘The security concerns remain of paramount importance, including issues associated with a microwave fence which is known to cause permanent brain trauma and other debilitating injuries.

‘My client exhibits symptoms of exposure,’ attorney Reginald Stambaugh writes in the December 15 correspondence obtained in full by DailyMail.com.

Stambaugh does not name the neighbor involved but a report in the Washington Post on Tuesday indicated that it was sent on behalf of 82-year-old Nancy S. DeMoss, whose home borders Mar-a-Lago to the northwest.

DeMoss, 82, has been head of her family’s philanthropic missionary foundation since the death of her insurance magnate husband, Arthur, in 1979, promoting various evangelical causes and distributing bibles and books to children in the Third World.

She is known to host luncheons and parties featuring prominent Christian speakers at her $34m waterfront residence. Neither her attorney, nor the foundation, returned calls asking for comment.

Microwave detection systems work by flooding an area with an electronic field. Any movement such as someone walking, running or climbing a fence disturbs the field and generates an alarm.

Manufacturers say they are a highly effective deterrent while insisting they do not harm humans or effect devices such as pacemakers.

The letter (from The Daily Mail): 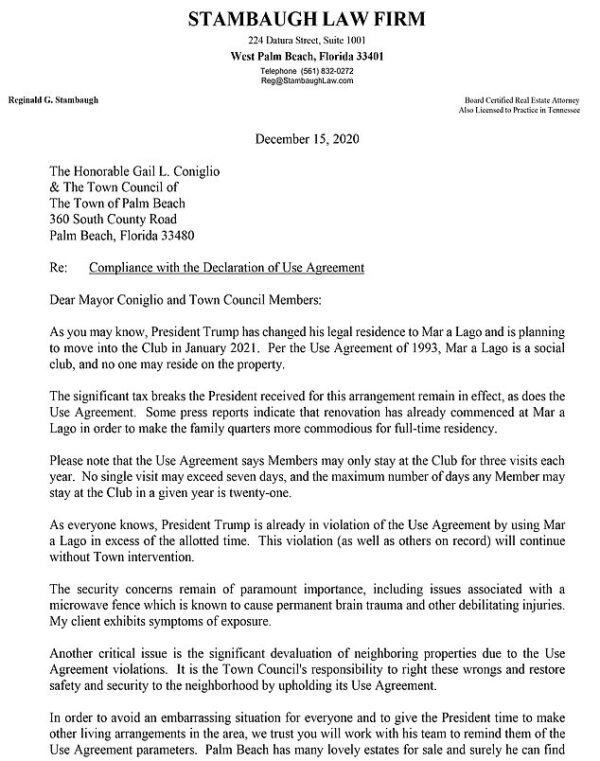 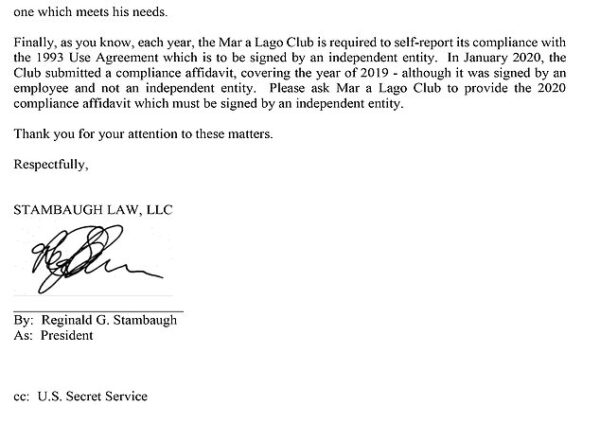 That could be job for a proctologist.

notamemberofanyorganizedpolicital in reply to Extirpatespdt45. | December 18, 2020 at 10:27 pm

The Democrat Party damaged her brain long ago.

Easy.
She can wear a tin foil hat and problem solved.

Just for fun, some MIT students did experiments with tinfoil hats and demonstrated that, rather than shielding the wearer, they acted sort of like antennas. 😀

Although the data is old (1970s, 80s), we found that recommending that effected persons hang a couple of aluminum pie plates (the kind you buy in packs of 2 or 3 at the grocery) in the window where the electronic waves are entering. The plates work better than just the foil as they are of a better grade of metal and, even if the “antenna” finding is true, the waves are intercepted.

This caused calls that came weekly and/or monthly to space out to semi-annually or longer.

Tell her he’s only going to be there for four years.

President Trump has made great sacrifices for the country. While I admire what the woman’s foundation does, that does not alter the fact that President Trump should be welcomed to live whereever he wishes.

I recommend that the lady move, not Trump. I recommend the town develop a plan to take advantage of tourists that will be attracted to Trump’s presence. More than Elvis?!

My guess is her TDS is the issue in her brain

I recall those ultrasonic alarm systems a lot of stores had in the 1970s. Some were very loud and I was blessed with hearing that – while I didn’t HEAR it – FELT it in my ears. They put me in agony.

Amen. In my first job out of college, I had to attend regular meetings inside an SCI facility. Occasionally I would inform them that whoever opened the door in the morning forgot to turn off the interior detectors. They were always amazed that I could detect them, because no one else could hear them. But for me, it was a pressure like being partially underwater.

“Being underwater”. An apt description. Some were on so loud they could melt earwax!

The excuse I was given by several stores was, “we have to leave them on during operating hours; the alarm company says it is for calibration.” Yes indeed. Just like “the volume on the annoyingly loud and awful background music is set from corporate, we have no control over it”, when there is a dial on the wall right behind them.

There is no end to these people’s pettiness. perhaps a public spirited group could take an interest in making her life miserable. Until these people start paying a significant personal price, this shit will continue.

Suggestion for Trump: Beam “Apprentice” episodes directly to the old bat’s TV. That’ll really drive her up the wall. LOL

I wonder if she is, by some small chance, a Democrat?

“promoting various evangelical causes and distributing bibles and books to children in the Third World….”

Legal question: are owners considered “members?” Does the President pay dues to himself? Are there owner occupied rental properties in West Palm Beach?

I suppose he could purchase a home next to Rush Limbaugh and be a contributor to the radio program!

But then, Ms. DeMoss would likely complain about the radio waves.

Offer her some bran flakes or prune juice. Send her a photo of Hillary, Ruth Ginsberg and Jen Psaki sharing a meaningful moment

This is a nuisance suit, but if he’s getting tax breaks for the property then he should abide by the terms of the Use Agreement (whatever they are).

I don’t think he’s getting tax breaks. As I understand it the issue was that the property was zoned as a private residence, and he wanted to use it to generate revenue, so he asked the city to convert it to to a private club, so he could have paying guests. This was the agreement they came to. He could convert it, but then it couldn’t be a residence. One or the other.

What’s her name? She might be a friend of my nutty sister. Completely convinced that my WIFI is going to do me in and I should make them move my smart meter because it’s too close to where I sleep.

Buy your sister one of these for Christmas.

Fly back to your cave, you old bat.
.

Maybe The complainant is missing an antecendant causal issue.

Donald just needs to wait it out, this fossil will be “in the yard” soon enough.

I grew up in the Palm Beaches. After Marjorie Post gave Mar a Lago to the Feds, we used to hop the wall and wander around. Back then no security, just broken glass embedded on the top of the wall.
Don’t you need a brain before it can be injured? And how do we know it’s not her own security system? Believe me when I say that every mansion on that island has a security system. Quite a few of them as good as what President Trump had at Mar a Lago.

Most people lost equity in their property or just walked away

Ijjut! Doesn’t she know it’s her body that absorbs Orange-Man-Bad juju? She needs to apply a tourniquet somewhere between her body and her head to make sure Orange-Man-bad juju doesn’t reach her skull.