Trump still might get the $2,000 checks he wants for citizens. 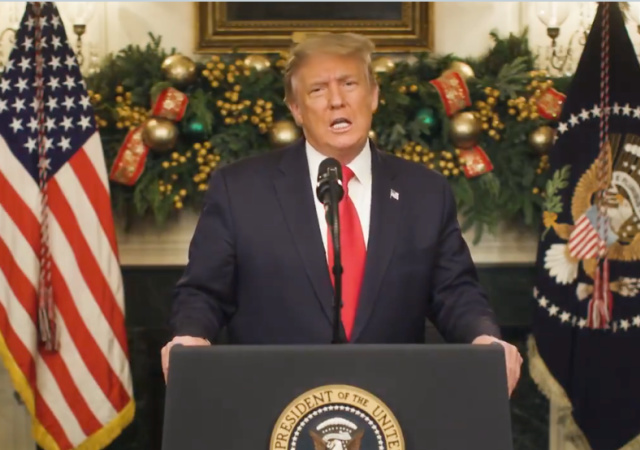 Trump railed against the COVID bill because it only gives the American people $600.

But it appears he signed this bill since the Democrats “prepped a bill to provide for $2,000 payment checks.”

7) So, House Democrats prepped a bill to provide for $2,000 payment checks. This bill will be on the floor late tomorrow afternoon or tomorrow night. At this stage, Fox is told the House will subject this to a two-thirds vote for passage.

9) But Fox is told by a member of the House GOP leadership that the measure should secure two-thirds.

Democrats are essentially daring Republicans to vote no. Hitting the two-thirds threshold is a challenge.

11) Democrats crafted the bill in a way to make the implementation of $2,000 checks contingent on the President signing the combo COVID/government funding plan. So, once the President saw the opportunity for the $2,000 with the House planning a bill, he agreed to sign the plan.

15) And, if the Senate does it by the book, the measure could take days to process in the Senate. However, if the Senate has the cooperation of all 100 senators, it can move very fast.

16) However, one senior GOP source doubted that the Senate could tackle the plan once it comes over from the House.

Unemployment benefits lapsed for people over the weekend but will pick up again now that Trump signed the bill.

It would also give unemployed Americans a supplemental benefit of up to $300 a week, a cut from the previous $600 a week that was approved in April, and ended in the summer.

The legislation would extend until the end of January 2021 a federal eviction prohibition and provide $25 billion of assistance to tenants in arrears on their rent. It also contains billions of dollars to help airlines, small businesses, entertainment venues and farms, as well as money to help Americans get vaccinated from the virus.

But Trump objected to the massive pork inside of the spending package. This includes $26.5 billion “to foreign countries for development assistance, global health programs and humanitarian assistance” and “$55.5 billion for discretionary funding in overseas operations.”

Exhibit E: Another $40 million will be allocated “for the necessary expenses for the operation, maintenance and security” of The Kennedy Center, which received $25 million in another COVID-19 relief bill earlier this year. Also in a related story, the Kennedy Center has been closed.

Exhibit K: The bill creates a Women’s History Museum and an American Latino Museum as part of the Smithsonian. Overall, the Smithsonian gets (checks notes again) $1 billion.

Holding up the entire bill was the only leverage available to get the $2000 stimulus. Now, there’s no incentive for Congress to do anything more. Just wondering what’s behind waiving the white flag on this.

notamemberofanyorganizedpolicital in reply to technerd. | December 27, 2020 at 11:41 pm

President Trump has fixed it so Democrats and GOPe are screwing themselves no matter what they do!!!!!!!!!!!!!!!!

MarkS in reply to notamemberofanyorganizedpolicital. | December 28, 2020 at 8:38 am

The only people getting screwed is us!

Surrender!! Thanks for nothing. We continue to get screwed by Democrats and Republicans.

If not Trump, then who?

What the hell? Why did he sign this POS? What improvements were done?

Did I miss something?

I’m not a Republican (OR a Democrat) and never have been. I DO have sense enough to know that when you’re depending on SCOTUS to suddenly do a 180 and bail him out, you’re in fantasy land.

No. He didn’t declare defeat. anyone who says that can’t really be an authentic Trump supporter. I’m starting to hear that this more about Jan 6.

I never claimed to be an “authentic Trump supporter”. I’m a conservative not a cultist, and there was nothing conservative about signing this abortion. It’s Trump throwing up his hands and admitting defeat and Trumpbots can’t handle it. The $2000 is more of the same thing (sending money we don’t have to people who haven’t earned it), and if Trumpbots were conservatives instead of cultists, they’d realize it.

notamemberofanyorganizedpolicital in reply to heyjoojoo. | December 27, 2020 at 11:43 pm

I am really disappointed in Trump for signing this

There is more to the story of you follow The Conservative Treehouse. Also, I found this link in the comments:

This is all confusing especially when disinformation is the lens through which all of this plays out. I am parking my emotions on the sideline as much as I can since all I can do is wait for any marching orders. Can someone just send up the balloon when it’s time?

notamemberofanyorganizedpolicital in reply to willow. | December 27, 2020 at 11:50 pm

“The $1.3-T Omnibus Bill is NOT a Federal Budget

The Big Q: Why is the Omnibus Spending Bill going no where?

The Big A: It is NOT an official US Federal Budget.

….. Congress screwed themselves by not passing a Budget

Here is what this means

The Constitution requires the President adhere to a Budget set forth by Congress and direct the expenditures as provided therein.

This Omnibus Spending Bill is just another Big Pork Bills, you know like they gave Mr. Hussein Obama for 8 years.

An Omnibus Spending Bill may have some ‘instructions’ as to how the money will be spent, but Mr. Hussein Obama ignored them.

He either spent the money, or he did not spend it, however he wanted to. And Congress could not, did not do a thing about.

A very savvy and keenly aware President Trump saw this happen, year on year. And he came to realize that the appropriations for the things in the Omnibus Spending Bills are only suggestions.

So like Mr. Hussein Obama, President Trump can spend this money on what he wants to, or does not want spend it on.

If our President told the US Treasury Department to ‘slow-walk’ the money to Planned Parenthood…until the say, the Senate gives him his confirmations, that would be what would happen.

If our President decided to ‘slow-walk’ that money too until those Dem managed Sanctuary Cities assists ICE in rounding up criminal illegal aliens, that would be what would happen.

And so on, and there is noting Congress can do about it the Oval Office now has the purse strings.

And when questioned and/or criticized, President Trump could just say Congress you should have passed a Budget.

So, our artful deal-maker said just give me money for the Military and the Wall, put anything else you want in it and sure enough they did. As the old adage goes, ‘the last glands to go are the greed glands’.

President Trump does not have to spend a Buck that he does not want to, because it is not a budge, he can spend as he pleases.

Congress appropriates money, then it is up to the President to do with it as he pleases.

Again, that is why Mr. Hussein Obama never had a Budget during his Presidency, as Congress voted continuing Omnibus Spending Bills, and for 8 years he took the money, and no one really knows what he did with it…….”

I don’t get what you are saying. You are making the assumption Trump will still be in office to slow walk anything he won’t be.

Looks like someone is trying to put lipstick on a pig

I guess we shouldn’t be surprised that Trump is the last to disappoint in a country full of disappointments. Tell me, does this now mean ILLEGALS will be getting $3,000.00 “stimulus” checks? Why would Trump let these bastards win again? Exactly what did he have to lose by opposing, and NOT signing, a bill that sells out the American citizen once again? On the bright side, Trump did promise we’ll NEVER become a socialist country, right?

Yes, they get back pay from the first stimulus

It is up to us. Anyone have an idea that doesn’t involve bloodshed?

Didn’t this bill also have the kicker that the President has to advise Congress on any deployment of the military under the Insurrection Act?

Unless I’m wrong about this, I’d say the party’s over.

Four years in DC and he still believed them. (Head shaking back and forth.)

Trump was going to have to sign the bills. His only real objection to the COVID Relief bill was the amount of the pay-out to the citizens. Vetoing the Omnibus bill would have only delayed its passage and delayed the benefits that many people are depending upon. So, both politically and personally, he was inclined to sign at bill as well. He was using the threat of a veto to boost the amount of relief to individuals.

People assume that Trump is an ideologue, who is personally opposed to the climate in DC. This does not appear to be the case. He has bent over backwards to make allowances for DC practices in order to advance his agenda. Unlike the Progressives and Democrats, he is not willing to burn down the house to get his own way. He is probably the greatest statesman we have had in the WH since George Washington. If people want the climate in DC to change, they are going to have to up off their backsides and change it themselves, either at the polls or through other forms of expression. It is DJT’s job.

One other note. Apparently Trump is using the Impoundment Control Act of 1974, to red-line the provisions of the Covid Relief act which do not pertain to Covid relief and to demand other concessions from Congress, for signing the bill. Until the Congress acts, these items will not go into effect. I wonder what will happen to all the pork and whether the Congress will act on the rest of Trump’s demands.

One of his judges will over rule him