Abraham Accords: The 2016 speeches by the two leaders presented a vision that has largely been realized during Trump’s term in office. 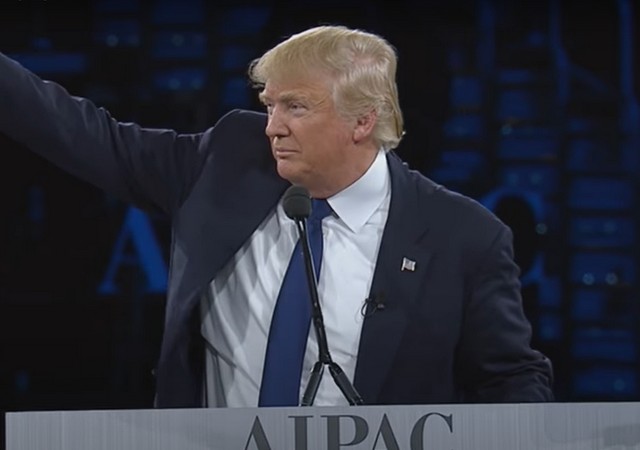 The peace deals – the Abraham Accords – reached between Israel and various Arab and Muslim nations in recent months seemed unthinkable five years ago, or, frankly, even five months ago.

For too long Arab and Muslim enmity toward Israel was tolerated, if not encouraged, in the diplomatic world. There seemed to be no impetus to change the status quo.

Earlier this week, writing in Newsweek, Seth Frantzmann marveled at the changes and noted that Israel’s isolation was accepted for too long:

Acceptance of the isolation of Israel and erasure of Jewish history in the Middle East has been an open wound afflicting the whole region. It should never have happened. Israel and some Arab countries fought a war in 1948, and there are legitimate reasons that Palestinians and their supporters opposed Israel’s policies. But similar terrible wars, such as that between India and Pakistan in 1948, didn’t result in dozens of countries not recognizing India or pretending that Hindus don’t exist. Normalization and the presence diplomatic relations are the most basic geopolitical norms throughout the world. Yet so many politicians, like former U.S. Secretary of State John Kerry, who pushed for engagement with Iran, blindly accepted the fact that so many countries did not normalize ties with Israel.

Maybe Israel’s normalization with a number of its neighbors couldn’t have been predicted. But it was consistent the visions of two men going back to March 2016, when they both addressed the AIPAC policy conference. Those men are Donald Trump and Benjamin Netanyahu.

Trump, at the time, was a celebrity businessman on his way to capturing the Republican nomination for president. Netanyahu was in his seventh year and third consecutive term in his second stint as Israel’s prime minister. It was a year since Netanyahu had spoken in front of Congress in opposition to the nuclear deal that was then being negotiated.

There were different parts of the speeches that grabbed my attention at the time. But rereading them now, and the benefit of nearly five years of history in retrospect, Trump and Netanyahu had complementary visions. Maybe they did not foresee Israel’s normalization that would actually take place, but they clearly recognized that the conditions existed or could be created to realize that goal.

The part of Trump’s speech that grabbed my attention was this:

You cannot achieve peace if terrorists are treated as martyrs. Glorifying terrorists is a tremendous barrier to peace.

Rather than giving primacy to Palestinian complaints about injustice, Trump said that they had to show that they were ready for peace. This wasn’t just a rhetorical point, this was a policy that he pursued.

Critics of Trump’s Middle East policy say that he sidelined the Palestinians. In truth, he urged them to buy into his plan. He also demanded that they stop incentivizing terror. On both counts, they refused.

Trump also promised to move the United States embassy to Jerusalem. It was a promise he kept.

In his speech, the candidate also succinctly reviewed the Palestinian refusal to make peace during the previous sixteen years and ended that history with, “When I become president, the days of treating Israel like a second-class citizen will end on day one.” That was a notable reversal from President Obama’s reported promise to put more “daylight” between the U.S. and Israel.

More generally, Trump condemned the United Nations, saying the that UN is not a friend of democracy, freedom, or the United States and “it surely is not a friend to Israel.” He also criticized the idea of getting the UN to impose a solution to the conflict between Israel and the Palestinians. Rather he called for making a deal between the two parties. Trump also trashed the nuclear deal with Iran.

But what’s important is that Trump unapologetically defended Israel. Part of the reason the United Arab Emirates, Bahrain, Sudan, and Morocco have made agreements with Israel is because they saw that the US fully supported Israel.

Netanyahu’s speech similarly covered a lot of ground, and it was much less contentious.  Even as he recalled his differences with the Obama administration, Netanyahu reiterated the strong alliance with the U.S. and support Israel got from the administration. But the part of it that really stood out for me was this:

First, the positive trend: Every day high-level delegations land at Ben-Gurion Airport. They come from America. They come from Europe.Increasingly they come from Asia, from Africa, from Latin America. As many of them confront the rise of militant Islam and its accompanying terrorism, they come to Israel to strengthen their security. They wish to learn from Israel’s proven security and intelligence capabilities how to better protect their own people.

But they also come to Israel because they want to upgrade their economies with Israel’s technology. And for good reason: Israel’s know-how is powering the world’s computers, navigating its cars, protecting its bank accounts. It’s led to breakthroughs in treating Multiple Sclerosis, Parkinson’s, Alzheimer’s. It helps farmers around the world yield more crops, produce more milk, conserve more water.So, for all these reasons, the world is coming to Israel. Today we have diplomatic relations with 161 countries – more than at any time in our history. And by the way, there are not that many countries left. There are only about 200 countries in the world.

I was aware of what Netanyahu was talking about but I didn’t share his optimism about the future. But even if I had doubts at the time, this was when Israel was making diplomatic inroads into Africa, and soon Netanyahu’s boast that Israel was well on its way to achieving diplomatic relations with the rest of the world didn’t seem so brash.

We may not know all the factors that led to the deals. I believe that no small part of it was the shared Iranian threat. Yossi Cohen, head of the Mossad, the spy agency that uncovered Iran’s nuclear archive, was one of the key figures involved in the diplomacy. However, Haviv Rettig Gur of the Times of Israel argued recently that it was more than Iran: the UAE and the other nations that made peace with Israel, want to learn what has made Israel a success.

Regardless, when something historic happens, it happens because opportunities are made or exist and that the actors who make it happen, realize it. I don’t know if either Trump or Netanyahu had any inkling of the deals Israel would make over the next four and a half years, but they both – in different ways – showed an understanding that the possibility for Israel to be more accepted diplomatically was there. But those deals likely would not have happened without them.

notamemberofanyorganizedpolicital in reply to JusticeDelivered. | December 25, 2020 at 7:15 pm

And the Best is yet to come.

The people at “WeLoveTrump.com” share this about the current state of the 2020 Presidential race:

We’ve been telling you for weeks.

The White House has instructed Trump staff to STOP packing…

Dan Scavino has been posting increasingly cryptic messages on Twitter……

Now, Rudy Giuliani has given an explanation on the voter fraud:

“You’re going to find out all at once. It’s going to be very shocking to the country.”

Peace on earth, goodwill to men….