Secretary Pompeo: The U.S. “will continue to aggressively pursue those who played a role in Mr. Levinson’s disappearance.” 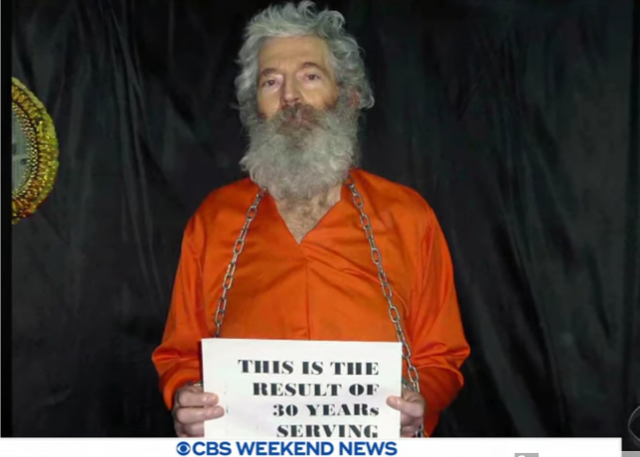 The U.S. State Department identified Mohammad Baseri and Ahmad Khazai of Iran’s Ministry of Intelligence for their role in the 2007 disappearance of the retired FBI agent.

Then 58, Levinson went missing after flying from Dubai to the Persian Gulf island of Kish as part of a private investigation fourteen years ago.

“We hope today brings the Levinson family some of the answers and justice they deserve.” Secretary of State Mike Pompeo said in a statement on Monday. The U.S. “will continue to aggressively pursue those who played a role in Mr. Levinson’s disappearance,” he added.

Levinson, the longest-held U.S. hostage in history, is said to have died after years of torture and captivity in Iran, the then-U.S. National Security Adviser, Robert O’Brien, disclosed in March 2020. The retired FBI agent was reportedly investigating a money laundering case involving Iran’s former President Akbar Rafsanjani when he was abducted in the Middle East.

The Associated Press reported the formal accusation brought against Tehran by the Trump administration:

The Trump administration for the first time on Monday formally blamed Iran for the presumed death of retired FBI agent Robert Levinson, publicly identifying two Iranian intelligence officers believed responsible for his abduction and imposing sanctions against them.

Levinson disappeared in Iran under mysterious circumstances more than a decade ago, and though U.S. diplomats and investigators have long said they thought he was taken by Iranian government agents, Monday’s announcement in the final weeks of the Trump administration was the most definitive assignment of blame to date. (…)

Besides calling out two high-ranking intelligence officers by name, U.S. officials also said the Iranian regime sanctioned the plot that led to Levinson’s abduction and lied for years about its involvement in his disappearance through disinformation campaigns aimed at deflecting responsibility and covering up the government’s role.

“The abduction of Mr. Levinson in Iran is an outrageous example of the Iranian regime’s willingness to commit unjust acts,” Treasury Secretary Steven Mnuchin said in a statement.

The Iranian intelligence officers, Mohammad Baseri and Ahmad Khazai, are alleged to have been involved in Levinson’s abduction and probable death. Under the sanctions, any property or assets they hold in the United States would be frozen. Though it’s unlikely they have bank accounts in the U.S., the sanctions could also limit their movements or financial dealing outside Iran. The men have met with intelligence officials from other countries and also led delegations, U.S. officials say.

For years, the Iranian regime has denied any involvement in Levinson’s disappearance. Iran’s culpability in the crime, however, is beyond doubt. In March 2020, a U.S. federal judge found Tehran responsible for the “hostage taking and torture” of Levinson. His arrest was initially mentioned in a 2007 article on Iranian state-run Press TV‘s website.

Only under President Trump’s watch Tehran finally confirmed an “open case” against Levinson before an Islamic “Revolutionary Court” in Tehran. In March 2020, the Iranian Foreign Ministry absurdly claimed that the former FBI agent was no longer in captivity and had left “years ago for an unknown destination.”

Levinson’s family welcomed the revelation of the culprits’ names after fourteen years of the harrowing ordeal.

“Robert Levinson will never come home to his family alive because of the cruel, cynical and inhumane actions of the Iranian authorities,” the family said in a statement on Monday. “Because of these men and others like them, our wonderful husband, father and grandfather died alone, thousands of miles from everyone he loved. This is just one step in a long road toward achieving justice for him, but it is an important one.”

The Obama administration did not care about this man. Neither will Biden (or the people who are using him as a hand puppet.) Trump still has time to exact pay back. Lets do it!

“The U.S. “will continue to aggressively pursue those who played a role in Mr. Levinson’s disappearance,”

Don’t worry about collateral damage while addressing this, such is not undesirable.

A Junta is now in charge of our country. It will reward Iran financially and militarily, and of course, receive kickbacks.

Which Junta is worse: Iran’s, which makes no bones about what it is, or the Junta running the former United States, which hides it’s tyrannical nature and engages in massive corruption, the type which would get them shot in Iran or Communist China?

Boeing can sell them new airplanes. I’m sure the Senators from Washington are delighted.

Once Biden takes over, he will send planeloads of hundred-dollar bills to Iran, just like Obama did. That way, he can brag that Iran didn’t seize any hostages on his watch.

Frankly, I would rather use some Hellfire missiles to make life difficult for the culprits who took American hostages. But I expect Biden to act like a wimp and re-enact the Iran nuclear deal.