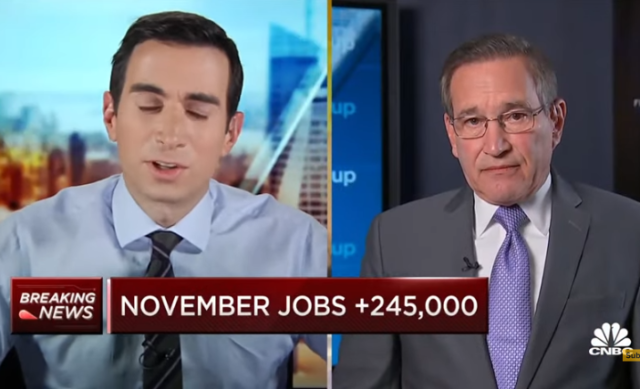 Few events have so clearly demonstrated the divide between Americans who are fine with restrictions, versus those who doubt their usefulness at preventing infections.

Santelli — a veteran business personality and former bond trader, who typically reports for CNBC from the Chicago Mercantile Exchange — suggested that U.S. policymakers should reconsider the balance between public-health restrictions, particularly on restaurants, with permitting more economic activity. He alluded to the recent controversies involving politicians such as Democratic Gov. Gavin Newsom of California, who caught heat for attending a birthday dinner for a friend at a posh restaurant in the San Francisco Bay Area.

“Therefore there is actually, and should be, an ongoing debate as to why a parking lot for a big box store, like by my house, is jam-packed. Not one parking spot open,” Santelli said. “Why are those people any safer than a restaurant with Plexiglas? I just don’t get it. And I think there’s a million of these questions that could be asked.”

“I think it’s really sad that when we look at the service sector and all the discussions we’ve had about job losses that that particular dynamic isn’t studied more, isn’t worked more, we don’t put more people in a room and try to figure out ways so that these service-sector employees and employers can all come back in a safer way,” said Santelli.

“You can’t tell me that shutting down, which is the easiest answer, is necessarily the only answer.”

Quite frankly, Sorkin’s moralizing about Santelli’s answer by citing “health experts” is laughable. Those “experts” have been wrong about so many issues related to coronavirus, its treatments, and the speed of vaccine development.

The heated debate with Sorkin was reminiscent of Santelli’s famous “Tea Party” speech in 2009, when he blasted Washington policymakers for funneling trillions of dollars to bail out various sectors that had been hit during the era’s financial crisis.

Pushed to the brink, Santelli, speaking on the “Squawk Box” show, exploded into a rant resembling the famous “I’m mad as hell and I’m not going to take it anymore” diatribe from the character Howard Beale in the 1976 movie “Network.”

As he closed the segment, he turned to traders on the floor and asked them if they would like to bail out their neighbors who had spent too much money on their homes. A chorus of “no” ensued. Earlier in the segment, he suggested he and some others in Chicago planned that summer to throw a “tea party” to show their anger.

Closing, he turned to the camera and asked, “President Obama, are you listening?”

It was Sentelli’s ‘rant’ that directly led to Americans across the country, myself included, to use social media to organize Tea Party groups.

Who knows, maybe this debate will lead to mask burning parties? Perhaps more businesses will defy orders and stay open during their usually highly profitable Christmas season…while sheriffs departments look the other way? Americans can get very creative in their defiance.

Clearly, all the restrictions have done have delayed the spread of the virus, which will not disappear until enough people have had it (or the vaccine) and are immune. The best approach is early detection, early treatment when significant symptoms begin, and protecting vulnerable populations with sensible precautions.

Meanwhile, in California, I had to race to my hairstylist today. He was scrambling to get as many clients in as possible before the new set of extreme restrictions issued by California Gov. Gavin “French Laundry” Newsom kick in.

Gov. Gavin Newsom said the new round of regional stay-at-home orders would take effect as intensive-care beds filled up. Millions of people across Southern and Central California are likely to see outdoor dining shuttered, playgrounds roped off and hair salons closed within days if the available intensive-care capacity in their areas dips below a 15 percent threshold.

The new restrictions will last for at least three weeks, strictly limit store capacity and allow restaurants to serve only takeout or delivery. The governor also said people should temporarily call off all nonessential travel.

So we’re back to “flattening the curve” again…but with a population that is up to its eyeballs with politicians’ hypocrisies and is justifiably skeptical that bureaucrats’ orders will kill viruses rather than their businesses.

The thing that stood out to me about this exchange was the child actor Sorkin’s smug condescension. It was even more disgusting than the inanity of his “arguments.”

THIS is what the Left has been reduced to.

Correction: The left started out like this. It’s called adolescence.

Sorkin is a fascist, very anti-2A.

Tea Party 2.0… The Tea Party was a good thing, until establishment Republicans hijacked the movement.

sorkin: But there is no truth that WE don’t DECLARE is the truth. Science!

Santelli: Are you for real? GFY!

In case you want to save 3:20 seconds of your life by not watching a cnbc product.

The reason the Tea Pary failed is it never had a real leader and was sabotaged by the Republican Party. Anyone that ran on its platform was bought off or defeated..

Trump IS the American Party!

Oddly, the flu rate is the same as pre-covid. So if masks aren’t stopping the flu, how are they stopping covid?

Sorkin is a mental midget unable to reason and with a deep need to take orders from others. He reminds me of 1950’s “conservatives” who had memorized some rules without understanding their meaning or purpose. When asked to justify their positions and beliefs, all the could do was shout out “Unamerican!” Today’s “progressives” are in the same position. They are unthinking followers trained in dogma but uneducated. When pressed to support their positions and beliefs, all they can do is shout “Racism” or “Science” all the while not having a clue what those words actually mean or about the consequences of their actions.

Lois G. Lerner, the IRS official who oversaw tax-exempt groups admitted to holding and delaying tax exempt status to groups who exposed conservative reasons on their applications. As a direct result the “Tea Party” groups were denied their right to succeed and reach their potential impact for conservative voters as a direct result of federal interference at I.R.S. It was with collusion and with knowledge from other federal head honchos, that the applications received from over 75 organizations from 2010 forward seeking tax-exempt status were selected and extensively delayed or burdened with undue extra inquiry including burdensome questionnaires and, in some cases, improper requests for the names of their donors simply because of the words in their names.

notamemberofanyorganizedpolicital in reply to Another Voice. | December 6, 2020 at 2:22 pm

Remember Legal Insurrection was one of those groups that was denied their rightful claim to tax-exempt status by her.

sorkin definitely has one of those ” punch me! ” faces–kudos to santelli for refraining from doing so

Just a couple of things here.

First, the severity of COVID-19, as a public health issue, is a media and public health industry generated scam. It does not exist. A vaccine or herd immunity? Please. Where is wide spread immunity from the various strains of influenza or the common cold? It does not exist and it never will. Neither will it exist for COVID, a disease with a recovery rate of 99.96-99.99%. So, WAKE THE F*** UP.

Now, the Tea Party. While a good idea and a good effort, it was largely nothing more than an ineffective feel-good activity. It produced NO lasting results and very few immediate results. It was almost immediately taken control of by Establishment GOPe interests and rendered impotent. Now, most of the people who were drawn to the Tea Party movement went on to become Trump supporters. But, the Tea Party organization was a dinosaur by that time and largely extinct.

If electoral politics are permanently corrupted and votes falsified, and the law is a multi-tiered affair that does not protect the mass of the population, what remains as an alternative?

One cannot contain a virus that is environmentally hardy and can survive on a surface for 28 days. A thought experiment:
Hermetically seal each person in their own containment chamber for 30 days. 30 days is chosen because the virus can survive for 28 days on a surface. If everyone is so contained then there is a chance the lockdown will work. However, in reality. as we learned, essential workers must be allowed to work. Each essential worker is a conduit to break the hermetic seal and act as a reservoir for the virus. The containment of some, but not all of the population, is doomed to failure.

That “surfaces” claim has been debunked as far as I know.