“She was told she would be investigated not only as a student, but also as an employee of the newspaper because she received a $75 stipend during the semester.” 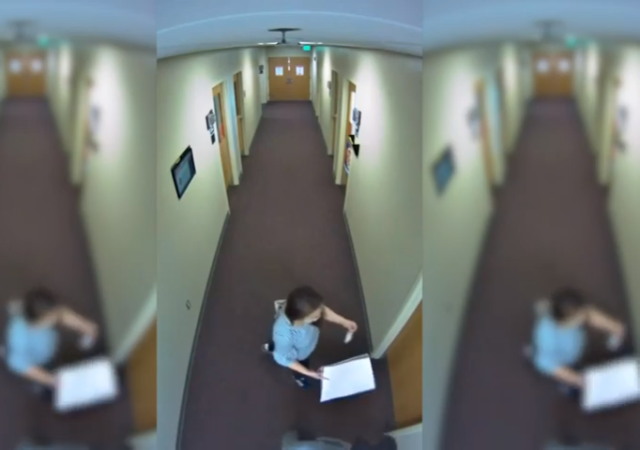 A student journalist at Frostburg State University in Maryland has written some stories which are critical of the school’s COVID-19 policies. Then something bizarre happened.

She reattached a note to a staff member’s door after finding it on the floor and was subsequently told she was being investigated for harassment.

The school dropped the investigation after the Foundation for Individual Rights in Education (FIRE) got involved.

A student re-attached a fallen note of support to a staff member’s door. Then her university investigated her for harassment.

How far will a university administration go to retaliate for bad press? At Frostburg State University, the answer is chilling.

Student reporter Cassie Conklin must have ruffled some administrative feathers for covering criticism of the Maryland university’s COVID-19 response for the student newspaper. After video showed her re-attaching a fallen note to a staff member’s door during a campus protest, she found herself the target of a baseless harassment investigation by the administration, and the newspaper found itself facing university demands to investigate and punish its own reporter.

“The realization that the president of Frostburg State University, a school that I deeply love and respect, chose to personally target and retaliate against me for my journalistic efforts has been overwhelming, confusing, and hurtful,” Conklin said.

The investigation was even multi-pronged:

One day later, the vice president for student affairs summoned Conklin to a meeting and said that the president’s office helped initiate the investigation “because of [Conlkin’s] role with the newspaper.” She was told she would be investigated not only as a student, but also as an employee of the newspaper because she received a $75 stipend during the semester.

This video, which is cued to begin at the 3:01 mark, shows Conklin picking up the note off the floor and reattaching it to the door:

It should also be stressed that the note in question, was one of encouragement and support:

A student journalist at Frostburg State re-attached this note, which had fallen, to a staff member's door. Then the university investigated her for harassment. Today, @TheFIREorg and @SPLC defend her rights. https://t.co/zPjbPbmOa4 pic.twitter.com/isFOIdmeAJ

Conklin is looking for an apology from the school.

I am also looking for an apology from @FrostburgState & @FrostburgPrez. He knew the accusation was baseless and disproven by video evidence and yet he still pulled The Bottom Line into a meeting with less than two hours notice. Why? What was the point? https://t.co/a7cWK71gPq

She is also thankful to the people who supported her through this.

Thank you, @TheFIREorg for this factual, well-written story about @FrostburgState. Thanks to @SPLC for their incredible support. As always, thanks to @BottomLineTBL for covering this personal story. (@C_msul & @delblubaugh are great colleagues.) https://t.co/cwHlvMLeXB

We should all be thankful for the FIRE and the great work they do.

BREAKING: @FrostburgState says no punishment or further investigation into student reporter who faced harassment complaint for re-attaching a fallen note to a staff member's door.   https://t.co/863aQiIGcw

Apology? At the very least a suspension and fine should be applied to whomever ordered the investigation. This is a gross abuse of power.

Hear! Hear!
But whom shall rise up? The inmates are in charge of the asylum.

Actually, I think an apology is a much larger punishment. An educrat who was fined and/or suspended would instantly become a martyr, a “victim of White supremacists”, blah blah blah.

Because of their titanic egos and massive sense of entitlement, making them apologize for their sleazy actions will really enrage them. They would prefer to eat broken glass rather that apologize to that…. that…. DEPLORABLE!!

Abuse of power? Nope. Alynski’s Rules for Radicals says that the only misuse of power is the non use of power. The university is simply following the playbook.

Don’t think this war’s not coming to you.

HOW BRAVE! KEEP ON KEEPIN’ ON MISSY. FIGHT THE POWER. THE ADMIN GANGS UP AGAINST A LONE STUDENT. HOW TYPICAL OF THE LIBERAL MOB….I’M GLAD YOU WON!

Have no clue what her political leanings are. I do wonder if this will make her look more critically at the liberal college bullshit.

Infantile, vindictive, irrational and callous totalitarian-narcissists — the animating traits of contemporary Dhimmi-crats, in a nutshell.

Am I reading correctly that she received “incredible support” from the SPLC?

Oh. Thanks. I was about to comment that if the SPLC supported her then there’s something missing from the picture that we need to know.

Thanks. I was really disconcerted by that. It wasn’t explained anywhere, and I knew only one.

That note is harassment? It has zero context to her.

In case you haven’t noticed, if no crime was committed the Left will make up a crime

was that a faculty member that first looked at the items on the floor then went into her office never to be seen again??

Calling her an “employee” brings into play a potpourri of wage and labor laws. An attorney could have fun suing for back wages.

The lede was buried: “No good deed goes unpunished.”

I hope she and the SPLC both self-destruct

Another poster has clarified that SPLC in this case means Student Press Law Center. And you’re criticizing the student reporter, for what reason?

She criticized Frostburg State’s handling of Covid. Was Frostburg’s Admin. utilizing the Trump recs for Covid or were they parroting Old Joe and Kam’s science?? It appears the latter.