Dec. 26 is also Boxing Day, which is not about the sport. 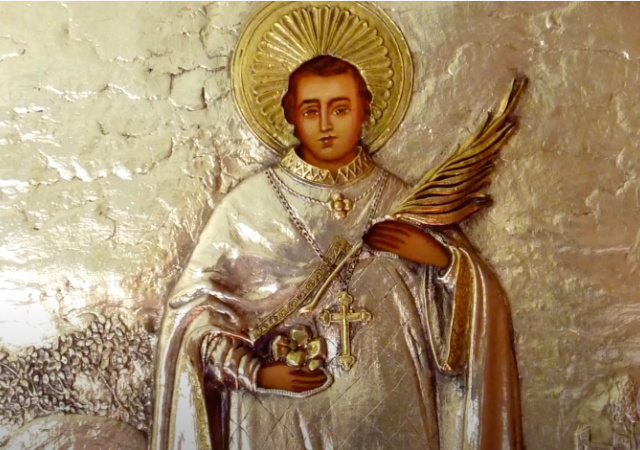 I hope everyone had a wonderful first day of Christmas.

On December 26, the second day of Christmas, we celebrate St. Stephen, who is the first Christian martyr and one of the first deacons of the Church.

It makes sense that St. Stephen’s Feast Day is the day after Christ’s birth since he is the first martyr.

A martyr is someone who sacrifices their life for their faith.

Acts of the Apostles says that Stephen was a man filled with grace and power, who worked great wonders among the people. Certain Jews, members of the Synagogue of Roman Freedmen, debated with Stephen, but proved no match for the wisdom and spirit with which he spoke. They persuaded others to make the charge of blasphemy against him. He was seized and carried before the Sanhedrin.

In his speech, Stephen recalled God’s guidance through Israel’s history, as well as Israel’s idolatry and disobedience. He then claimed that his persecutors were showing this same spirit. “…you always oppose the holy Spirit; you are just like your ancestors” (Acts 7:51b).

Stephen’s speech brought anger from the crowd. “But he, filled with the holy Spirit, looked up intently to heaven and saw the glory of God and Jesus standing at the right hand of God, and he said, ‘Behold, I see the heavens opened and the Son of Man standing at the right hand of God.’ …They threw him out of the city, and began to stone him. …As they were stoning Stephen, he called out, ‘Lord Jesus, receive my spirit.’ …‘Lord, do not hold this sin against them’” (Acts 7:55-56, 58a, 59, 60b).

Saul would later convert to Christianity and become St. Paul.

December 26 is also known as Boxing Day in the United Kingdom. The description comes from the Middle Ages when people opened boxes filled with alms to give to the poor. Some churches still perform this service on Boxing Day.

It’s also the day of the Christmas carol Good King Wenceslas, which tells the story of the king being charitable to the poor. The cold made his feet bleed, but the king “knew that whatever he did to the least of his subjects he did for Christ in honor of the first holy martyr.” The song ends:

In his masters step he trod
Where the snow lay dinted
Heat was in the very sod
Which the Saint had printed
Therefore, Christian men, be sure
Wealth or rank possessing
Ye, who now will bless the poor
Shall yourselves find blessing.

Wherever we go the people all complain… 🙂

Thank you for this. Hope the entire LI family had a wonderful Christmas!

Mention this every year it’s the Feast of St Stephen on Dec 26.

Thank you for doing this series on the days of Christmas. It means more to be done by one who is professing their faith.

Some think Stephen was stoned for what he said in Acts 7:48 – a simple truth cited by the prophet Isaiah hundreds of years before Stephen; that is “God does not live in temples made by men (hands)” … that was blasphemy to the Jews who held that God via the Holy Spirit dwelled in their temple in Jerusalem – within the Holy of Holies.

Enraged by Stepehen’s presumed blasphemy against the temple, Saul presided over the stoning of Stephen.

Yet look what Saul, now Paul so many years later says in Acts 17:24. The very same thing Stephen was murdered for. How I imagine that the image of Stephen being stoned while yet asking God to forgive his murderers, including Saul, haunted Paul – and may have been the “thorn in the flesh” that compelled Paul to such devotion.

If not for Stephen, would there have been a Paul?