“I mean no offense to fecal matter here. Fecal matter has done nothing wrong. Conservatives can’t say the same lol”

Do Democrats really think half of the country is going to make this industry ‘free’ with their tax dollars? I’m screen capping the tweets below in case they get deleted.

This is what the progressive elites think of their fellow Americans, folks.

A Rutgers University professor took to Twitter to compare the GOP to “fecal matter” and the “rhetoric” of the pro-life movement to a “death cult.”

Assistant professor of journalism and media studies at Rutgers University Chenjerai Kumanyika is a self-acclaimed “scholar, journalist, and activist.” In February, he appeared at an event with Boston University Center for Anti-Racist Research Director Ibram Kendi in which he declared that “language matters.”

“Language matters, you know, and I think that in a society like the United States, which has actually a history of anti-intellectualism, there can be a way to marginalize and to act like language doesn’t matter or someone who’s talking about language is just engaging in semantics but you know these words really stand in, they help us to understand things,” Kumanyika said.

Addressing his “liberal friends,” Kumanyika advised them to “call out” and “organize against” the potential Biden-Harris administration should it “harken back to what has not worked before.”

Responding to himself, Kumanyika tweeted, “You don’t have to wait and ‘work with them’ for two years as Republicans work to shit out something even more putrid in 2022.” 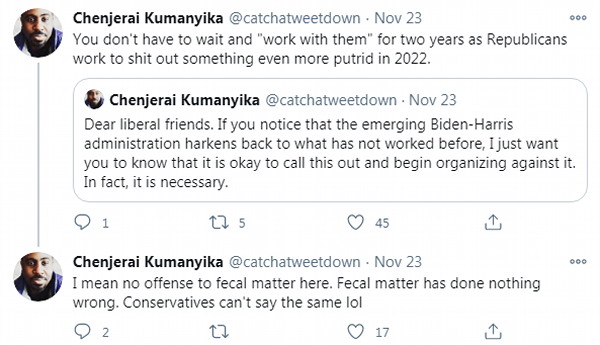 Ignore Twitter. It’s not real life. It’s more like performance “art” where people say all sorts of things they would never dare say where anyone could hear them.

I can remember Rutgers being an accredited school as recently as 30 years ago, even before struggling Elizabeth Warren had to feed her child during class.

Remind me: What’s the appropriate response to such a piece of…? Before you answer, please keep in mind: Language matters!

A teacher of a major that is, at best, a “soft” major.

The US has a history of some of the greatest intellectualism the world has ever known. We invented and developed practically every piece of technology one encounters in life. Never forget that.

Wokeness had nothing to do with that. These idiots pretend to be intellectual. Ridicule is the right reaction.

And what can one say about someone who knows to say “fecal matter” instead of just saying “shit,” as the rest of us do?

Why, what can one say but, “My, my, what an erudite person this must be!”

If the USA were really “anti-intellectual” (Leftist dogwhistle for “rejecting complete crap”), he would be asking if people wanted fries at the drive-up window instead of giving his ignorant butt an unearned seat at the educational table.