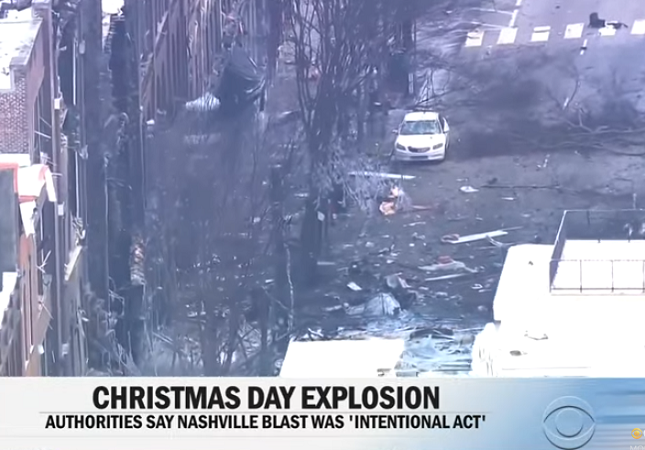 On Christmas morning, an RV broadcasting a bomb warning was discovered in downtown Nashville.  Police were on the scene responding to gunshot reports and quickly leapt into action, evacuating nearby buildings, and doubtlessly saving lives.

The RV exploded with great force, knocking out the windows of nearby buildings, causing massive damage to others, knocking out communications, and injuring at least three people.

Police were responding to a report of shots fired Friday when they encountered the RV blaring a recorded warning that a bomb would detonate in 15 minutes, Metro Nashville Police Chief John Drake said. Police evacuated nearby buildings and called in the bomb squad. The RV exploded shortly afterward, Drake said.

“This morning’s attack on our community was intended to create chaos and fear in this season of peace and hope. But Nashvillians have proven time and time again that the spirit of our city cannot be broken,” Mayor John Cooper said at a news conference after issuing a curfew for the area.

Police believe the blast was intentional but don’t yet know a motive or target, and Drake noted that officials had not received any threats before the explosion.

The chief said investigators at the scene “have found tissue that we believe could be remains, but we’ll have that examined and let you know at that time.” Police could not say whether it potentially came from someone inside the RV.

The recording blaring from the RV prior to it exploding issued the following warnings:  “All buildings in this area, must be evacuated now” and “If you can hear this message, evacuate now.”

The Tennessean has more:

Reports of shots fired were made to Nashville police at 5:30 a.m.

Nashville police and fire crews responded the area of Second Avenue and Commerce Street and saw no evidence of any shooting.

Instead, they noticed a suspicious RV parked outside an AT&T building before 6 a.m. Friday, according to police. Officers and witnesses heard a recording from the RV giving a dire warning: “Evacuate now. There is a bomb. A bomb is in this vehicle and will explode.”

Metro police Chief John Drake said a motive in the explosion was not known, nor has a suspect or person of interest been named.

Drake said it was unclear if anyone was inside the RV when it exploded. He confirmed “tissue” that “could be” human remains was found in the area of the explosion. Authorities are investigating to determine if it is connected with the explosion.

The investigation has focused on an older model RV that police said was spotted in the area after 1 a.m. Friday, hours before the explosion.

The FBI is leading the investigation with help from the ATF and other federal, state and local agencies.

The Nashville bomb was detonated outside an AT&T switching facility, raising the question about whether the company was the target. AT&T is viewed as a sinister force by some in our society. 2/2 https://t.co/ZyDODO4pXB

Footage from the scene on 2nd Ave North as multiple agencies continue to work and investigate an explosion from earlier this morning. pic.twitter.com/5g40RhwNNl

BREAKING: This is the RV that exploded on 2nd Ave N this morning. It arrived on 2nd Ave at 1:22 a.m. Have you seen this vehicle in our area or do you have information about it? Please contact us via Crime Stoppers at 615-742-7463 or online via https://t.co/dVGS7o0m4v. @ATFHQ pic.twitter.com/JNx9sDinAH

We will provide updates as more information is released.

You just know that if this story drops off the front pages it’s because the Democrat media couldn’t pin this on Trump.

notamemberofanyorganizedpolicital in reply to mailman. | December 26, 2020 at 2:22 pm

It was a Desperate Deep State Action.

Communists Chinese and Democrats….
Your every move is known……

“Starting After Christmas This Is Really Going to Blow Up”

Did the announcement end with “Have a nice day”?

notamemberofanyorganizedpolicital in reply to TheFineReport.com. | December 26, 2020 at 2:20 pm

No. It was “Vote for Obama’s 3rd Term with Kamala.”

TheFineReport.com in reply to notamemberofanyorganizedpolicital. | December 26, 2020 at 4:42 pm

It continued: “….and you’ll wind up living in this old RV.”

If it couldn’t be pinned on a Trump supporter it will go down the rabbit hole as a unknown.

This will be deemed to be the work of a white supremacist militia with ties to Trump.

I think it was the guy with the white van that mailed the pipe bombs, and Corn Pop

The FBI is Looking for a white man wearing a MAGA hat carrying a can of Goya beans.

What’s left of the device has been sent to the Crowdstrike lab for analysis.

Lost me at “FBI is looking…”

A criminal is the top man at the FBI. The FBI is no more now than a kinder, gentler Swamp SS or Soviet NKVD.

Looks like they may have found the guy, but it always astounds to see the comments from people that have it all figured out. Biden tells us, “We choose truth over facts.”

So loud and so ignorant. “Hands up, don’t shoot.” Another example of the current state of things and why we are teetering.

We’re not ‘teetering’. We’ve fallen over.

Things seem to be ‘calming down’ right now, but we are in the same situation the Austrians found themselves in 1938, Austrians were confounded to find themselves incorporated into Nazi Germany.

On March 11–13, 1938, German troops invade Austria and incorporate Austria into the German Reich in what is known as the Anschluss.

A wave of street violence against Jewish persons and property followed in Vienna and other cities throughout the so-called Greater German Reich during the spring, summer, and autumn of 1938, culminating in the Kristallnacht riots and violence of November 9-10.
https://www.ushmm.org/learn/timeline-of-events/1933-1938/german-annexation-of-austria

There is no way our votes will ever count again. NONE. The fix is in, and it is in PERMANENTLY. William Barr saw to that. Wray will continue to see to that.

The ONLY hope we have of saving our asses from the coming state-sponsored violence against us will be secession. We better start organizing it now, before the organizers find themselves subject to SWAT raids at dawn, just like the one against Roger Stone.

Austria was not “invaded”. The German army came as rescuing heroes, not as hostile invaders. The overwhelming majority of Austrians wanted them to come, and invited and welcomed them. And they knew very well what they were getting into. The German annexation of Austria was as friendly as the US annexation of Texas, which the Texians had begged and pleaded for.

Well, apparently we have some neo-nazis lurking here. Or people who just can’t face the facts about the Anschluss.

Interesting story on this exploring the connections to SolarWinds over at the National File.

There is simply too much not known about this incident to come to any conclusions, other than an explosive device, in an RV, detonated, after a warning was broadcast from the vehicle for at least 15 minutes. We have no known suspects or motives, at this time. As the investigation progresses, investigators will probably figure this out, who was involved and come up with a probable motive. Of course, whether we ever hear the truth is another matter.

Well, at least we know one category of suspects to rule out. It was not done by Moslems, or there would have been no warning. Moslem terrorists generally try to maximize the death toll from their attacks, not to minimize it.

What’s really weird is the backwards masking message of the warning….

This. A favorite of those who think that The DaVinci Code is a documentary, and those who enjoy trolling them.

“AT&T is viewed as a sinister force by some in our society.”

Conspiracy theorists believe Nashville AT&T is one of the eight hubs the government uses to tap into communications.

Apparently the current suspect had a hair-across about 5G.

5G. If that’s the official story then I’m doubtful. The media has been wrong on all the other stories.

This story will really take off if they find nooses. The FBI will send a full contingency of agents to Investigate. /sarc

“According to journalist David Begnaud, a CBS News national correspondent, “At least 2 tips were called in to @FBI about Warner, prior to the explosion.”

Sorry, but they couldn’t retask any critical resources from stalking Proud Boys.