Leftists took advantage of the situation to vomit their hatred. 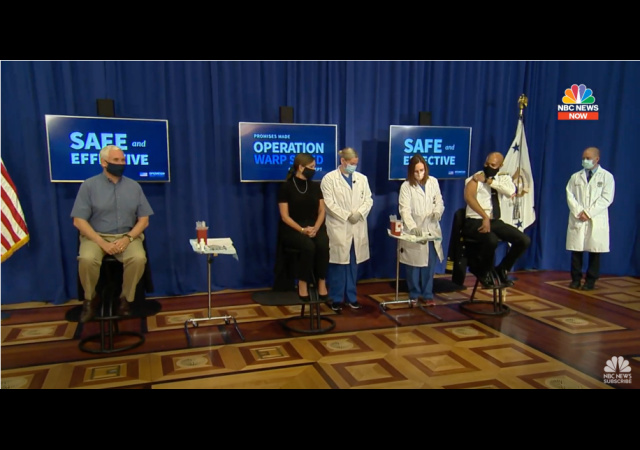 Pence is the highest public official to receive the vaccine.

He said he “didn’t feel a thing” and described it as a “medical miracle.”

Did that stop the leftist hatred? Of course not!

Mike Pence is about to get the COVID vaccine but it won’t cure him from being a gigantic homophobic fuckface.

Mike Pence today took the coronavirus vaccine, which he also hopes will cure his homosexuality. pic.twitter.com/vcmlPFZT0n

Nothing in the news is believable. Though I think highly of Pence, I wouldn’t trust that the injection was actually the vaccine.

I believe this though.

40% of COVID Deaths Were Actually Victims of Gunshot Wounds

Anyone seen anything about this?

MajorWood in reply to notamemberofanyorganizedpolicital. | December 18, 2020 at 9:02 pm

Haven’t read it but I suspect it is a correlation with no causality. Advice I was given at one time is to not use statistics like a drunk uses a streetlight, more for support than illumination. people who get the flu shot have already self-selected into a smaller group of the more sickly, so of course *anything* will affect them more than the general population.

nordic_prince in reply to notamemberofanyorganizedpolicital. | December 18, 2020 at 11:15 pm

That’s simply not the case. You are referring to one county where the total number of deaths were 19, of which 5 we’re listed as covid related. That’s hardly representative of the national picture.

Don’t know how that’s going to play in the ratings, but I have an idea for a hit

Give Schumer, Kamala, Schiff, and any other commie you can round up an injection on live TV. The ones they administer in Terre Haute… 🙂

If possible, only after due process of law.

On the other hand, the logical case for retributive justice is weak, and incarceration mainly removes dangerous criminals from society. Deterrence is the most sensible purpose of punishment, and privately “giving them the vaccine” does not do it well. A better alternative would be public, televised vaccinations. If America was short of needles, there’d still be lots of rope. It should be sufficiently dramatic to impress their comrades and financial backers.

I get sick of the unfounded Trump hate. AS far as the vaccine goes. I have always been suspect when the Government says you have to get this.

The Swine Flu vaccine was a raging success…

notamemberofanyorganizedpolicital in reply to The Friendly Grizzly. | December 18, 2020 at 5:48 pm

What, exactly, is the point of the damn vaxx then?

What, exactly, is the point of the damn vaxx then?

Stock prices for pharmaceutical companies, and lining the pockets of politicians.

Because you won’t then die as a result of covid, nor will you have as nearly have as severe symptoms. At least in circa 90Percent of cases. That’s a pretty compelling reason. Once the vaccine is distributed to a significant portion of the population it won’t matter if you transmit covid so there will be no reason to have social restrictions

With a 99%+ recovery rate, I’m really not concerned about succumbing to “covid.” And the vast majority are asymptomatic, so the “it’ll lessen the severity” shtick is equally unconvincing. But thanks for playing.

notamemberofanyorganizedpolicital in reply to nordic_prince. | December 18, 2020 at 5:48 pm

Excuse me for being an old cynic but why would anyone take a vaccine that has been rushed through and has had no time to be checked for long term side effects?

Get the vaccine and they still will force you to wear a mask, “social distance,” and continue on under house arrest.

notamemberofanyorganizedpolicital in reply to thad_the_man. | December 18, 2020 at 5:50 pm

Social Justice and the COVID-19 vaccine
“Older populations are whiter,” Dr. Schmidt said. “Society is structured in a way that enables them to live longer. Instead of giving additional health benefits to those who already had more of them, we can start to level the playing field a bit.”

I can already see this as morphing into the next ‘Tuskegee Study of Untreated Syphilis in the Negro Male.’

It also reminds me of The Onion piece about how we must protect our precious gays by keeping them out of the military.

notamemberofanyorganizedpolicital in reply to Neo. | December 18, 2020 at 5:51 pm

Please use the “doc’s” formal title….

Dr. Schmidt of the Nazi S.S.

We Can Stop Covid In ONE WEEK

HCQ cocktail was effective. Ivermectin protocol is even better. The key to ending the pandemic is to reduce spread. A vaccine is one option. Early, inexpensive, low risk, widely available, well-established treatments are another. Also, a sizable portion of the population is already immune to the virus and do not experience disease progression.

Sorry what’s your source for saying that ‘ a sizable portion of the population are immune’?

The lack of dead bodies piling up in the streets is a decent indication.

Err the official figures are around 300k dead in the USA so far. That a pretty significant figure. As for your previous comment about 99percebt recovery that really depends on a number of factors. If you are young fit and no issues then yeah sure but as you climb that age categories that’s totally wrong.

nordic_prince in reply to notamemberofanyorganizedpolicital. | December 18, 2020 at 11:24 pm

nordic_prince in reply to notamemberofanyorganizedpolicital. | December 18, 2020 at 11:25 pm

Good for them. But I’m still not going to get the vaccine until it goes through the complete FDA approval process and is found to be both safe and effective for the purpose it is intended. An abbreviated and rushed Emergency Use Approval (EUA) just to get something out on the market isn’t convincing me at all. So I’ll wait a while to see what happens to these guinea pigs experimental subjects people first. Just my 2¢ for what it’s worth.

notamemberofanyorganizedpolicital in reply to Lucifer Morningstar. | December 18, 2020 at 5:54 pm

The analysis is very simplistic, there is no attempt to derive out other factors. All it really says is that old people die from covid and that old people get the flue vaccine. Well no shit sherlock.