“When we came outside, we noticed the whole window, it was completely blown out, smoke coming out. I didn’t know if the house was on fire or what was going on.” 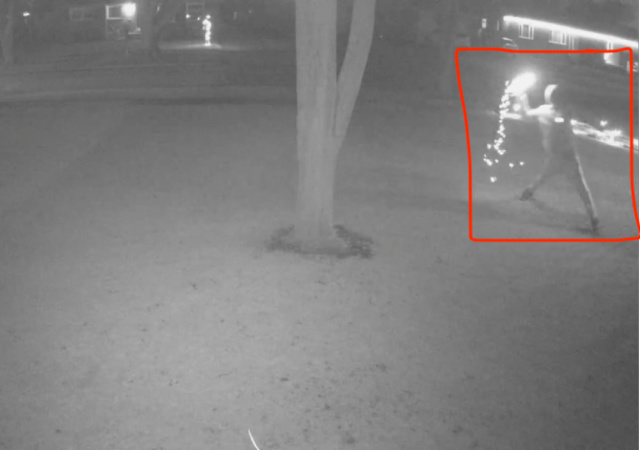 Ah, those violent and horrible Republicans strike again! *checks notes* Oh, wait. It appears to be another person with horrible TDS.

Someone literally bombed a man’s house in Macomb County in Michigan. The homeowner said the person targeted him because he supports President Donald Trump.

The homeowner chose to remain anonymous. Can you blame him!?

It happened Saturday morning after midnight while upstairs with his girlfriend:

He was upstairs with his girlfriend when they heard a loud boom go off. He rushed downstairs and said he was shocked at what he saw.

“Smoke was filling the house,” the homeowner said. “I went up told her to get out the house, ‘Grab the dog and get out of the house.’”

That’s what the homeowner said he experienced early Saturday morning after hearing not one, but two loud booms. We’re not identifying him, due to safety reasons.

His living room floor has a huge hole in it. The bomb blew out the drywall, cracked the ceiling, and shattered a lot of glass:

“When we came outside, we noticed the whole window, it was completely blown out, smoke coming out. I didn’t know if the house was on fire or what was going on,” the homeowner said. “I seen a truck racing down the road. When the police showed up, they went in, luckily it didn’t catch fire, but the actual implosion of the mortar, it did some serious damage.”

The homeowner also shared video with Local 4 of who he believes is the man who threw the explosion devices into his home and then drove off.

“We were really scared. I mean when you feel your house shake and explode and smoke, you don’t know what’s going on,” the homeowner said.

The homeowner always has a Trump sign in his yard. Considering violence against Trump supporters it’s no wonder he thinks the man targeted him over the support.

“I mean, it’s worth it to me to find out who’s trying to catch my house on fire and possibly kill me,” the homeowner said.

Anyone with information is asked to contact the St. Clair Shores Police Department at 586-445-5300.

It’s always a good idea to wait a couple days for more evidence, but his situation is prima facie much more plausible than Jussie Smollett’s.

A bomb vs graffiti and aggrieved victim with a witness and video of the attack vs no witnesses?

Yeah, I’ve giving this guy more credence than someone claiming a “speech is violence” hate crime

Do they really think we are going to stand down?

notamemberofanyorganizedpolicital in reply to 2smartforlibs. | December 7, 2020 at 2:28 pm

Defense of Liberty in the face of Tyranny is no crime.

Barr has single-handedly destroyed out country. He could have saved it. But he had his agenda.

Yes they do think that. They realize that most Trump supporters are law abiding and peaceful and are far too genteel to resort to criminal behavior in response to their rampant criminality.

When have we ever stood up?

Squinting a little, it seems this is one of those “drop down the tube” mortar balls, which can be powerful enough to take off an arm. Certainly enough of a threat that a homeowner can take corrective action if they see an individual on their lawn getting ready to chuck one, I presume.

They should turn the guy over to the owner of the house once they catch him.

Suspect is described as an upper middle class, over educated white guy with no workable skills.

notamemberofanyorganizedpolicital in reply to Strelnikov. | December 7, 2020 at 2:30 pm

An Ivy League grad then……..

And then in court, he will whine “It was just a firework”, the judge will say he is a good boy overall and suspend sentence.

Can’t wait for the Joseph Goebbels media to claim this is merely a dispute over grass clippings.

At what point will people decide it’s time to start the killing?

Considering we just had an elwction as fake as one in North Korea, the time is now.

We just experienced a coup.

OK tough guy! Just who are you gonna kill to correct the mess that we are in? The demise of which judge or politician would return things to normal? You planning on doing this all by yourself, or do you feel that you can recruit a few?

I imagine it’s when people realize that things can never be “normal” again, and that they don’t want to live with the “new normal” that they’ll decide they’ve had enough. At that point things could very well go the way of guerilla warfare, at least in the beginning. There are several really good strategy and tactics books on the subject, if you’re truly interested in who is likely to eat lead first.

Things are going to just implode, and there will be such chaos, no one will be in charge.

Talk to me when there is no food in your local supermarket because the highways are closed.

The chaos will start from Harris (Biden will be gone very soon); she’s so arrogant and talentless that she’ll just go along with the most radical of the left, thinking she’s safe tucked under the left’s arm. She’ll do very stupid things, which will push most of us to go into survival mode. We’ll all become “tough guys” when we’re starving.

Law and order – and very likely a new local government – will be created by the sheriffs across the nation now pushing back against corrupt, crazy people like Newsom.

California has always been the trendsetter in America. Newsom is a wimp: if chaos began, he’d go to dinner at some fancy restaurant and fret, alongside Pelosi. Meanwhile, the sheriffs loyal to the Constitution will take over.

I’m curious, Mark: what are you going to do when you experience hunger for the first time in your life, because supermarkets in your area are bare? Have you forgotten?
https://www.youtube.com/watch?v=3AZBLfh6vwo

Or your electricity goes out for weeks to keep you pacified?
https://www.foxbusiness.com/lifestyle/california-power-utility-1-million-cut-wildfires

Or the flow of water to houses in your neighborhood suddenly stops – while the clueless Harris is wined and dined by her handlers?

Will you beg the Harris government for food, electricity and water?

Will you beg the fascists Biden and Harris will appoint as our chief law enforcement officers to protect you from Antifa and BLM thugs on their payroll firebombing your house? (Biden already announced that psycho Becerra; he announced he’s keep that criminal Wray as head of the FBI.

Some BLM goons are already on city payrolls: https://www.csmonitor.com/USA/Justice/2016/1123/Baton-Rouge-agrees-to-pay-Black-Lives-Matter-protesters-100-000

No need to kill, just show some enthusiasm for the feet, ankle, knee, elbow, a little something to remind them of the need to respect others.

Dems have cheered on killings while rioting and looting.

Where was John “KliegLights” Chisholm on the evening of the assault?

Chill, people. It was a mostly peaceful firebomb. Yet, moreover, it wasn’t a significant widespread firebomb to change to outcome of ‘what was going on.’

Have we learned nuthing??

90% of the house was not destroyed…mostly safe bomb.

examining the still photo header am wondering why the homeowner didn’t drop the sob in the yard–he’d evidently hurled one or two incendiaries into the house–was the homeowner required to let the guy hurl another?

a moment to get your bearings then drop the guy

Nowadays, you need to take more than a moment because of the aggressive DAs that want to use you as a puppet against the 2nd amendment and defending your life and property.

Also, if you read more clearly, he came outside to see a truck speeding down the road. The images of the guy are from automated video surveillance (like a Ring system), not from active surveillance.