“The day that madman [Saddam] was hanged was the day people celebrated the final victory … Trump’s fate won’t be much better than Saddam’s.” 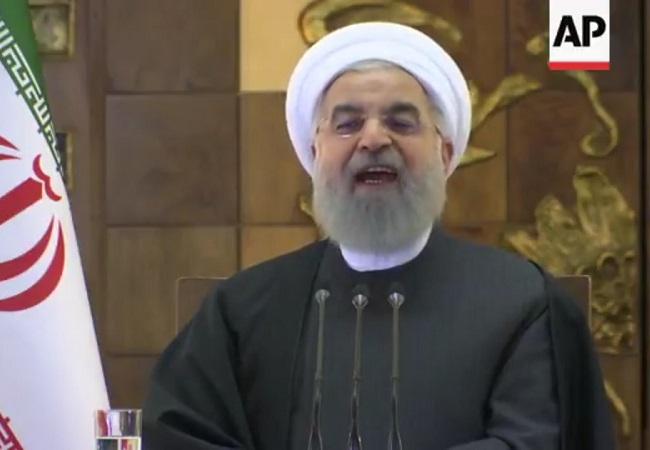 Iranian President Hassan Rouhani, referred to by the NY Times and other as a “moderate,” on Wednesday compared U.S. President Donald Trump to the slain Iraqi dictator Saddam Hussein, saying that he will meet the same fate as the tyrant who was hanged in 2006.

“The day that madman [Saddam] was hanged was the day people celebrated the final victory,” Rouhani told his cabinet in Tehran. “Trump’s fate won’t be much better than Saddam’s.”

The comments come after Iran-backed terrorists fired rockets at the U.S. embassy in Baghdad over the weekend. The attack killed one Iraqi civilian and damaged the embassy compound.

President Trump tweeted a photo of three Iran-made rockets recovered from the site that failed to launch.

“Our embassy in Baghdad got hit Sunday by several rockets,” Trump wrote, “Guess where they came from: IRAN.” He offered the Tehran regime a “friendly health advice” warning that “If one American is killed, I will hold Iran responsible. Think it over.”

Iran’s president on Wednesday described Donald Trump as a “madman”, likened him to former Iraqi dictator Saddam Hussein, and predicted the American president would suffer a fate similar to the late Baathist leader, who was hanged in a Baghdad prison 14 years ago.

“The day that madman was hanged was the day people celebrated the final victory,” President Hassan Rouhani said during a cabinet meeting. “Trump’s fate won’t be much better than Saddam’s.” (…)

“One madman in our region was Saddam, who imposed a war on our nation, and the other madman was Trump, who imposed another war on our people,” he said in comments that were broadcast on state television.

This is not the first time the top Iranian regime operative have made such outrageous remarks aimed at President Trump.

The regime has also been devastated by the campaign of ‘maximum pressure’ pursued by President Trump, placing stiff sanctions on Tehran and eliminating high-profile Iranian terror operatives in the Middle East.

Iranian regime received billions of dollar as part of the Obama administration-backed nuclear deal. Tehran has since squandered billions in financing Islamic terrorists in Syria, Lebanon, and elsewhere in the Middle East. Iran and its proxy terrorist groups have welcomed the prospect of Joe Biden taking over the White House and reviving the Obama-era deal.

Trump warns Iran after rocket attack on US Embassy in Baghdad

The enemies of the United States are all real happy with Creepy Biden.

notamemberofanyorganizedpolicital in reply to Exiliado. | December 24, 2020 at 3:17 pm

Until they all get the Traitors’ Treat.

The Friendly Grizzly in reply to notamemberofanyorganizedpolicital. | December 24, 2020 at 4:58 pm

What’s that. Throw foreign aid at them til they beg for mercy?

China and Iran are doing everything they can to overthrow the US government and the Trump Administration. Democrats are in on it.

That should tell you something.

notamemberofanyorganizedpolicital in reply to Exiliado. | December 24, 2020 at 3:27 pm

I think they live in Iran.

Birx Has a New Excuse For Violating Her Own Lockdown Orders: My Parents Were Depressed and Lonely Due to My Lockdowns, So I Had to Visit Them Or They’d Die

What “United States”? That country is gone. The former America is governed by a Junta.

Another vote for Obama/Biden’s legacy of terrorism without borders.

Sounds like Iran is making space in their bank to hold a few more pallets of small unmarked bills from the US.

Seems like he is trying to take credit for Saddam’s death. Not surprised how low this idiot wants to stoop.

This guys sounds like a democrat…… better yet, he screwed up so bad that it blocking the shipping channel too. Is this the same guy that shot down the passenger jet too?

IRAN’S replica US aircraft carrier has sunk by itself and blocked one of its most important naval ports.

In an embarrassing blow to the Iranian regime, the mock-up has been sinking and risks causing a shipping hazard in the approach to the harbour of Bandar Abbas.

How about between now and the twentieth we destroy most of Iran’s water revivors, hydroelectric dams and high tension distribution, along with their air capability.

That is what will improve mullah’s disposition.

If that doesn’t pacify them, we should start taking them out. Every time one comes out of their hole, terminate them.

Do you think Trump could talk the military into doing it? He wasn’t too successful in getting troops out of Afghanistan. It’s nothing short of incredible how much insubordination there’s been for the past 4 years.

I think that as long as we keep putting up with Iran’s dirty deeds, that the problem will only get worse.

We can wreak havoc without setting foot in Iran. Excess water spilling across the landscape followed by a severe water shortage and electric power problems would make it rather difficult to run centrifuges.

He’d still have to get somebody to fly the drones and/or drop the bombs.

Letting Leftists have their way that would happen. Thankfully we are still in the cold war stage.

Spoken as a fool speaks. President of his palace in a nation without flushing toilets, this jackass is Obama’s equivalent.

True, they have no flush toilets and little running water, but they have enough nuclear reactors to provide power for the next 5,000 years.

But minimal delivery capability, which is why they MUST have their nuts cut out, and soon.

New Year’s eve would be a good time.

Someone should be where to start with that may crooked politicians. Keep in mind Trumps, not a politician

The difference is that Saddam didn’t have a vast constituency willing to go to the wall for him.