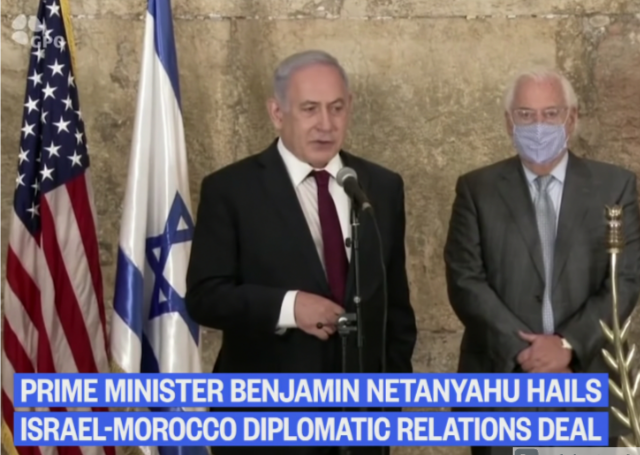 The Iranian regime and Palestinian terrorist groups have been enraged by the normalization of ties between Israel and Morocco. President Donald Trump announced the move on Thursday, making Morocco the fourth Arab country to recognize the Jewish State under the diplomatic framework established by his administration.

“The agreement builds on one of his main foreign policy accomplishments, winning broader recognition of Israel in the Arab world under the rubric of the “Abraham Accords”,” Associated Press noted. Under the agreement, Morocco will establish full diplomatic relations with Israel, resume official contacts, and allow direct flights between the two countries.

“Morocco’s normalisation of relations with Israel is a betrayal and a stab in the back of Palestine, Hossein Amir-Abdollahian, an adviser to Iran’s parliamentary speaker,” Reuters news agency reported.

Iran’s proxy terrorist militia, Hezbollah, joined Tehran in rejecting the movement towards peace between the Arab states and Israel. “We condemn the announcement by the Moroccan authorities about the normalization of relations with the Israeli enemy. This move is in the context of the successive fall of a number of Arab governments that, at the behest of the United States and the Zionist regime, have undermined the Palestinian ideals and want to destroy it,” said the Lebanon-based terrorist outfit in a statement, Iranian news agency Tasmin reported.

Gaza-based Islamic terrorist group Hamas, which also receives weapons and financial support from Tehran, was equally outraged at the prospect of peace between yet another Arab country and the State of Israel. “Hamas condemns the Moroccan-Zionist declaration of normalization of relations between them, in an odious move that is not befitting of Morocco,” Hamas complained.

Congrats to Morocco & Israel on their new peace deal!

This was the reaction of Iran's Supreme Loser to this news today…? pic.twitter.com/xNdXBNTWT3

Egypt, Bahrain and the United Arab Emirates welcomed the announcement that Israel and Morocco are to establish full ties on Thursday, with all three countries predicting the development will contribute to regional stability.

“I followed with great interest the important development regarding the agreement between Morocco and Israel to normalize relations between them with American mediation. If this step bears fruit, it would create further stability and cooperation in our region,” Sissi said in a statement.

Abu Dhabi’s Crown Prince Sheikh Mohamed bin Zayed Al Nahyan tweeted in Arabic: “We welcome the United States ’declaration of recognition of the brotherly Morocco’s sovereignty over the Moroccan Sahara, and the decision of Rabat to resume contacts and diplomatic relations with the State of Israel … a sovereign step that contributes to strengthening our common quest for stability, prosperity, and just and lasting peace in the region.”

With Tuesday’s announcement, Morocco has joined the UAE, Bahrain, and Sudan in normalizing relations with Israel since President Trump unveiled the Abraham Accords four months ago. Prior to that, only two Arb states, Egypt and Jordan, had formally recognized the Jewish State.

Morocco first established low-level diplomatic ties with Israel in the mid-1990s, but broke off the relations following the Second Palestinian Intifada of 2000, a campaign accompanied by widespread Palestinian rioting and waves of terrorist bombings against Israeli civilians.

The Israel Hayom newspaper noted the significance of the agreement. “For 40 years, the US did not have one foreign policy achievement in the Middle East to speak of,” Israel’s most-read newspaper wrote. “Trump and Netanyahu have made history in the Middle East.”

Halcyon Daze in reply to notamemberofanyorganizedpolicital. | December 12, 2020 at 2:34 pm

JusticeDelivered in reply to notamemberofanyorganizedpolicital. | December 13, 2020 at 8:00 pm

Both Iran and Arab squatters in Palestine are in need of drastic population reductions.

Don’t worry. I’m sure Biden already has a plan to screw these deals up and make the terrorists happy again.

Biden will be gone very soon. Harris will become president.

Once a whore, always a whore: she is a talentless bozo, with a moral compass that is frightening.

The Middle East will be reset to conditions that enable radical Islam and where Israel is an enemy of the entire region.

Israel has been smart: they’ve made a serious alliance with India, the only nation with the population and nuclear arsenal to face Red China.
https://www.timesofisrael.com/netanyahu-participates-in-renewable-energy-confab-hosted-by-india/

With America about to be turned into a whorehouse in January, Israel planned ahead.

The rest of the world recognized Trump’s contribution with peace prize nominations. Why don’t you give him any credit???

Harris, like all aging prostitutes, must find another line of work. For example, I know of one who started burning houses down for insurance. Others get their hooks in old men who are near death, and try to cheat heirs out of their inheritance.

Harris is rapidly approaching the point of physical undesirability, she clearly has lacked any other desirable traits.

Morocco has been careful to avoid war since 1956, in spite of the Spanish Sahara matter. This is entirely in keeping with its politics. In fact Morocco is the only Muslim country (they are not Arabs, but Berbers , Vandals and Visigoths) which has publicly mused that it wished the Jews never left and they would be welcome back

Not sure, but I may have accidentally down voted you.

The kings (the current one, his father, and his grandfather) never wanted the Jews to leave. They were and are genuinely philosemitic. The population is a different story.

Morocco has a long history of antisemitism, which the French kept in check for 150 years, but once they left the king was the only one standing between the Jews and the mob, which is why so many left.

Don’t worry Iran, Biden will be along shortly to fuck things up royally ??

Better to have Iran and the Palestinians angry at you rather than happy.

Seems the palestinians are mainly shiites and the Arab suunis are distancing themselves from them.

Shiites of Shits? Even dung has more merit.