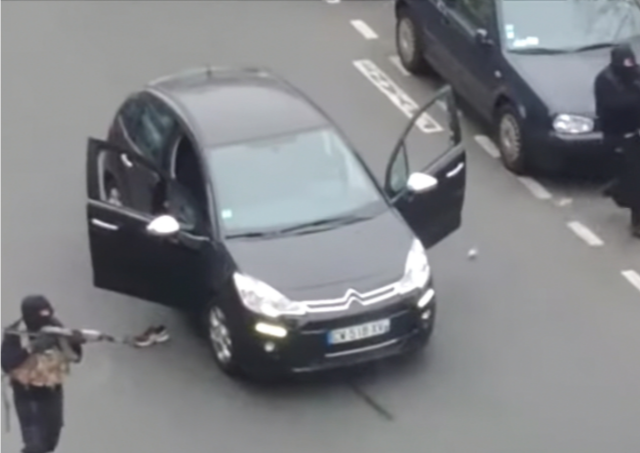 A Paris court has convicted all 14 suspects charged with involvement in the 2015 Islamic terrorist attack on Charlie Hebdo magazine and a Jewish supermarket. The defendants, accomplices of the terrorists who carried out those attacks, received between 30 to 4-year sentences.

The French satirical weekly Charlie Hebdo had angered Muslims worldwide by publishing Mohammed’s caricatures, the prophet of Islam, triggering a wave of jihadi terror attacks and widespread rioting. The cartoons were first published by the Danish daily Jyllands-Posten in 2005 and reprinted a year later by Charlie Hebdo, making it a target of Islamic terrorist groups.

Key accomplice Hayat Boumeddiene, the so-called “Islamic State Princess,” was tried in absentia and given a 30-year jail sentence. Boumeddiene, the 26-year-old widow of one of the attackers, is believed to be hiding in Syria. Another defendant, Ali Riza Polat, also received a 30-year jail term for complicity in the terror attacks.

A French court on Wednesday convicted 14 people of crimes ranging from financing terrorism to membership of a criminal gang in relation to Islamist attacks in 2015 against the Charlie Hebdo satirical magazine and a Jewish supermarket. (…)

A third attacker, Amedy Coulibaly, killed a police woman and then four Jewish hostages in a kosher supermarket in a Paris suburb. Like the Kouachis, Coulibaly was killed in a shootout with police.

Among the 14 accomplices sentenced on Wednesday was Hayat Boumeddiene, the former partner of Coulibaly and one of three defendants tried in absentia. Believed to be still alive and on the run from an international arrest warrant, prosecutors referred to her as an “Islamic State princess”.

The judges convicted Boumeddiene, 32, of financing terrorism and belonging to a criminal terrorist network, and sentenced her to 30 years in jail.

The court verdict comes as France faces a fresh wave of Islamic terrorism. On October 16, a French school teacher was beheaded by a Muslim immigrant in a Paris suburb for showing Muhammad caricatures to his class as part of a discussion on free speech. About two weeks later, a Tunisian Muslim immigrant beheaded a 70-year old woman and murdered two other worshipers in Notre Dame church in the French city of Nice. Both attackers shouted “Allahu Akbar” during the beheadings, leaving no doubt about their ideology and motives.

In the aftermath of those incidents, Europe was hit by a series of Islamic terror attacks, including a shoot-out by an Albanian-born Muslim outside Vienna’s main synagogue and other locations in the Austrian capital.

Since October, violent anti-French demonstrations took place across the Muslim world, with rioters enraged over President Emmanuel Macron’s crackdown on Islamist outfits after the beheading of the Parisian teacher his defense of free speech.

President Macron denounced the teacher’s beheading as an act of Islamist terrorism.

“One of our compatriots was murdered today because he taught … the freedom of expression, the freedom to believe or not believe,” Macron said during his visit to the suburb where the decapitation took place.

Marine Le Pen, France’s top opposition leader, regards the counter-terrorism measures taken by the Macron government as inadequate. She has called for a “wartime legislation” to fight back against Islamism in France. “Against an organized and already installed force … our president has proposed an inadequate and anachronistic containment strategy,” Le Pen, who heads the National Rally party, added: “The situation calls for a strategy of reconquest.”

Besides Britain and Germany, France is a major Islamist bastion in Europe. According to the European Union’s counter-terrorism data released in 2017, France was home to 17,000 radical Muslims.

Marine Le Pen is entirely correct. France, you brought this on yourselves. Fight back or lose your nation to the savages.
.

Same applies here, with the Left being the savages!

The only cure to France’s and many other countries Muslim problem is death or expulsion. Muslims have shown us repeatedly that they are eager to do this to others, so it is reasonable to do this to them.

As little as 4 years? It is customary to hold POW’s until a war is over. Furthermore, the Geneva Conventions permit the death penalty for soldiers and saboteurs who eschew uniforms to pass as civilians.

Both attackers shouted “Allahu Akbar” during the beheadings
And, in a confident and well-armed nation, none should ever get beyond “Allahu…” before being dropped where they stand.

Alas, France has abandoned the guillotine!

Time to automate the Guillotine, truss them up, place on conveyor, use machine vision to line up their neck, chop, index and repeat as necessary.

Recall how the vile and utterly despicable moral reprobate and all-around fool, Obama, attempted to callously downplay this attack on French Jews, by flippantly, casually and inaccurately referring to it as an allegedly “random” attack on a bunch of “folks” at a “deli.” This idiot couldn’t even bring himself to call the attack what it plainly was — a targeted attack on Jews by Muslim jihadists who had sought out their victims at a kosher market.

Of course, the media lapdogs — as per usual — gave Obama a total pass on the latest idiotic and morally contemptible statement to come out of his foolish mouth, whitewashing/rationalizing/downplaying Muslim jihadism and Jew-hate, and, Obama’s lackeys were forced to issue a statement, to supposedly “clarify” his manifest moral stupidity.

They earned the death sentence.

1) The Islamic Republic of France is inevitable. They waited too long to suddenly grow a spine;

2) No one ever wrote this “received between 30 to 4-year sentences” this way.

30 years seems very light, too, for the crime

The Charley Hebdo murders show how insane the left is about gun control. This magazine has a long history of Muslim threats and attacks, yet they chose not to have firearms to defend themselves from Muslims practicing Islam. They are stupid that the world is better off without them.