Fourth Day of Christmas – Day of the Holy Innocents

Fourth Day of Christmas – Day of the Holy Innocents

“A voice was heard in Ramah, sobbing and loud lamentation; Rachel weeping for her children…” 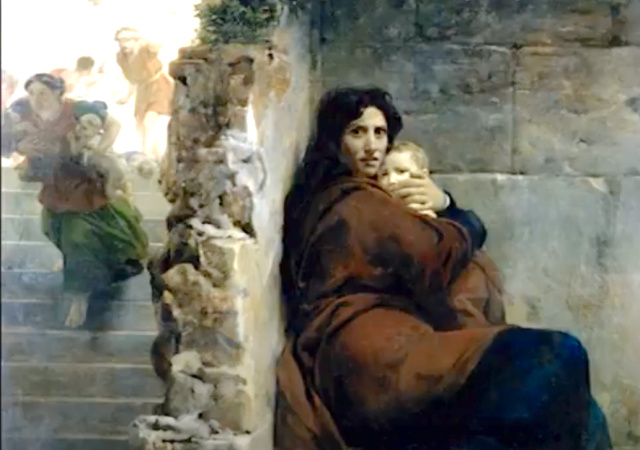 According to Catholic resources, the fourth day of Christmas, December 28, is for commemorating and remembering the souls lost during the Massacre of Holy Innocents.

People did not like Herod, the king of Judea. The unpopularity left him insecure and paranoid. He wanted to keep his throne.

Matthew 2:1-18 tells this story: Herod was “greatly troubled” when astrologers from the east came asking the whereabouts of “the newborn king of the Jews,” whose star they had seen. They were told that the Jewish Scriptures named Bethlehem as the place where the Messiah would be born. Herod cunningly told them to report back to him so that he could also “do him homage.” They found Jesus, offered him their gifts, and warned by an angel, avoided Herod on their way home. Jesus escaped to Egypt.

Herod became furious and “ordered the massacre of all the boys in Bethlehem and its vicinity two years old and under.” The horror of the massacre and the devastation of the mothers and fathers led Matthew to quote Jeremiah: “A voice was heard in Ramah, sobbing and loud lamentation; Rachel weeping for her children…” (Matthew 2:18). Rachel was the wife of Jacob (Israel). She is pictured as weeping at the place where the Israelites were herded together by the conquering Assyrians for their march into captivity.

The Holy Innocents were considered some of the first martyrs. The children did not know Jesus or why they died, but they were murdered to save Jesus Christ.

While it is a sad day, people injected a few joyous traditions into the day:

On this day it is custom to give the youngest child in the household the power to rule the day. From what to eat, where to go, and what to do, the youngest is in charge. In Mexico, it is a day for children to play practical jokes and pranks on their elders. Use #HolyInnocentsDay to post on social media.

The Roman Catholic Church would wear purple vestments on this day, but in 1962, it switched to red. The Church used to exclude Gloria or Alleluia out of respect for mothers in Bethlehem. The English called the feast “Childermas.”

It’s also a day to remember and pray for those unborn human beings murdered in the womb and victims of genocide.

“The unpopularity left him insecure and paranoid…”

Sounds like every leftist and fascist leader in world history.

Some say that Herod would not do this. BUT, when he was dying he planned to have many prominent jews executed when he died so people would be mourning after his death. Fortunately, after he died but before it could happen, the order was reversed.
Also, there were not many boys under 2 years old in Bethlehem at that time.

There are, to date, no secular accounts of this event, which might have raised a few eyebrows at that time. It may be folklore, or might be a pious fable. A majority of Herod biographers, and “probably a majority of biblical scholars,” hold the event to be myth, legend, or folklore. https://en.wikipedia.org/wiki/Massacre_of_the_Innocents

It seems pretty obvious to me that it was deliberately invented in order to evoke the story of the Egyptian Pharaoh ordering all newborn Jewish boys drowned in the Nile, after his astrologers told him Moses had been born. This, along with having Jesus and his parents go down to Egypt and then return, and indeed the whole improbable story having him born in Bethlehem, was designed to create parallels to well-known stories of the past, in order to convince readers that he really was the messiah. Thus his birth was to evoke those of Moses and David, and all the Biblical verses about Israel coming out of Egypt were now to be repurposed as prophecies about him.

In all likelihood he was born in Nazareth where his parents lived, was never in Egypt, and the only massacre of innocents was the one that happened 1300 years earlier, and is recorded in Exodus chapter 1.