Translation: IT IS OKAY WHEN DEMOCRATS DO IT. 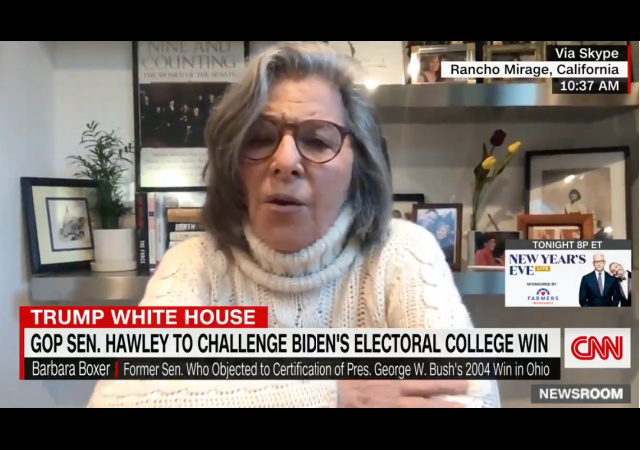 Translation: IT IS OKAY WHEN I DO IT.

It’s also another example that both sides only care when their side does it. I don’t get why Democrats and Republicans cannot be consistent.

Republicans at the time deemed Boxer’s efforts as “frivolous” and described Democrats as “sore losers.”

Fmr. Sen. Barbara Boxer, who objected to the 2004 Ohio electoral results, says there's "no comparison" to Sen. Hawley’s plan to challenge Biden’s electoral win: “John Kerry had conceded the race. We have a President here who’s orchestrating kind of an overthrow of the election.” pic.twitter.com/yACbbYQvUM

Isn’t that what President Donald Trump and his allies claim happened in November?

The objecting Democrats, most of whom are House members, said they wanted to draw attention to the need for aggressive election reform in the wake of what they said were widespread voter problems.

In a letter to congressional leaders Wednesday, members of the group said they would take the action because a new report by Democrats on the House Judiciary Committee found “numerous, serious election irregularities,” particularly in Ohio, that led to “a significant disenfranchisement of voters.”

“How can we possibly tell millions of Americans who registered to vote, who came to the polls in record numbers, particularly our young people … to simply get over it and move on?” Tubbs Jones told reporters.

Oh, Boxer and Nancy Pelosi “insisted they were questioning the process, not the outcome.”

Except it was Ohio’s 20 electoral votes that “pushed Bush beyond the 270 he needed for victory.”

So Boxer’s explanation is that it was OK when she did it because she didn’t mean it and was only doing it for show, whereas she’s afraid Hawley actually means it.

So disappointed that Barb had ANY response.I thought(wishful thinking)she had died and gone where it’s always hot.

We know one is a Conservative and the other is a crooked liberal.

We also know that there was massive fraud this time, so we know and she knows that there is a real case now.

notamemberofanyorganizedpolicital in reply to JusticeDelivered. | December 31, 2020 at 2:54 pm

Well that’s a lying cheat for you.

Amazing double standard. Does actually use their brain anymore?

Maybe they are using their brains, just that their capacity is limited.

Only to think up lies

She’s kinda right… it was different.

Her objection in 2004 was more of the same old tired “voter suppression” bullshit that constantly spews out of the mouths of Dims, like diarrhea from a sick baby’s asshole.

What we have this year is thousand and thousands of solid pieces of evidence all pointing towards a massive voter fraud conspiracy that amounts to treason.

Its ironic really there is actual evidence for th impact of voter suppression and for the election fraud well not so much.

One day I was visiting a friend’s business, two women, one mid 20s and the other pushing 40 were divorced and bashing men. So I offered that women are like flowers, paused while they were smiling, and then said that women go to seed son after being pollinated. Men and women are meant to jerk each other’s chains.

Some very interesting viewpoints on this election steal.

Emerald Robinson Examines the Future of the Republican Party

I thought she was dead. Of course that wouldn’t stop her from voting…

Boxer was largely worthless as a Senator, and she’s clearly gone down over the years since.

Gone down? Wait, I thought we were talking about Boxer. Why are you bringing Kameltoe into this?

What do you mean by “was”? She’s still a senatrix, and she’s still worthless.

Oh. Sorry, I hadn’t noticed that she’d been replaced in the senate by someone not only even more useless, but who spent very little time actually in the senate.

She was worse than worthless – she was malignant parasite.
Most likely, she was just a puppet, witness her retirement, which was likely forced upon her by her handlers.

After her ‘retirement’, she went to work for a D.C. lobbying group.

The ONLY reason this hack won the CA senate seat was because CA GOP hog Bill Jones elbowed his way into the GOP senate candidate position, promising a brutal fight for the seat – and then did a ‘William Barr’, totally sitting it out (he did not run a single television commercial to promote his candidacy), letting Boxer cruise for a win. (Jones was likely corrupted, just like Barr.)

Unfortunately, Jones is still alive. And get this: after he threw the senate race, the scumbag went to work for Sequoia Voting Systems!!!!!!!!!!!!!!!!

Bill Jones apparently was the first CA GOP rat of the Romney/Barr/McCain breed of scum.

Wrapping it up: Boxer was a nothing, a mere placeholder for her leftist handlers while they developed whores (literally) like Kamala Harris to rise through the ranks.

It’s been a scam for quite a while, folks.

Kamala Harris whoring her way up:

No, you old creep.

Fraud is the difference. Fraud vitiates everything. Fraud is not something you are free to cram down the throats of Americans.

I once thought better of Barbara Boxer. Now I know she is an cheater, unsuitable for the high office she once held.

I keep asking the Blog Democrats at the place I usually hang out at to join me in a Unity! Statement and say,”The 2020 POTUS Election was as free, fair, and as devoid of illegalities as the 2000, 2004, and 2016 POTUS Elections were!”, but none have done so.

Weird….I thought they WANTED Unity!, after all.????

So their argument isn’t even that there’s only the usual level of fraud, but that there was less than usual in 2020? Crazy.

Seems to me that in the spirit of “standing” and “stating a claim for which relief can be granted”, Hawley’s objection is much BETTER than hers. She was objecting on behalf of a candidate who had conceded, and she says she didn’t even want to affect the result. Hawley is using the rule properly, a real objection intended to affect the outcome.