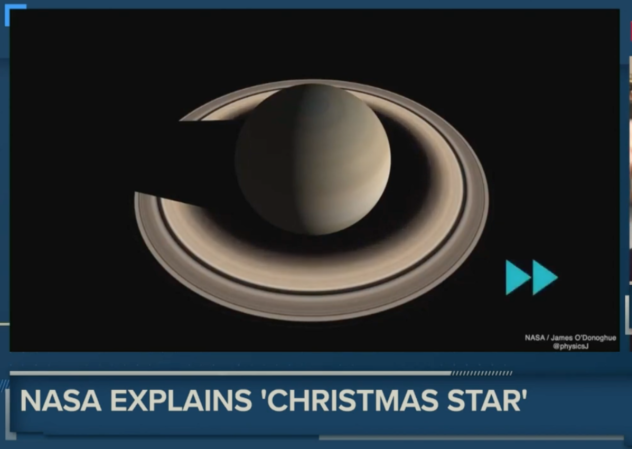 This is pretty awesome.

On December 21, for the first time since 1226, the “Christmas Star” (that told the Maji of Jesus’ birth) will be visible in the night sky. The Earth, Jupiter, and Saturn will be lined up in a row with Jupiter and Saturn appearing incredibly close, creating what some astrophysicists believe is the Christmas Star.

If you managed to see the crescent Moon pass Jupiter and Saturn this week, you’ll have noticed something else about the Solar System’s two largest planets.

They’re now really, really close to each other, and on December 21, 2020—the date of the December solstice—they’re going to almost appear to collide to become one super-bright point of light.

Jupiter and Saturn will look like a “double planet” for first time since Middle Ages.

In reality, of course, they won’t be close at all. Think about the distance from the Earth to the Sun. That’s what astronomers call an astronomical unit (au), and it’s how they measure distances in the vastness of the Solar System. Jupiter is 5 au from us. Saturn is 10 au.

These two planets aligned in the Solar System a few weeks ago, but on December 21 they’ll appear aligned to us on Earth. Our line of sight is different because we’re orbiting quickly around the Sun.

“Alignments between these two planets are rather rare, occurring once every 20 years or so, but this conjunction is exceptionally rare because of how close the planets will appear to be to one another,” said Patrick Hartigan, astronomer at Rice University.

“You’d have to go all the way back to just before dawn on March 4, 1226, to see a closer alignment between these objects visible in the night sky.”

Jupiter and Saturn’s orbital resonance is such that they align in a “great conjunction” every 19.6 years, but they’re rarely as close—from our point of view on Earth—as on December 21, 2020 when the two planets will be separated by less than the apparent diameter of a full Moon.

A conjunction is when two objects line up in the sky.

Though some astronomers think the Star of Bethlehem was actually a trifecta with Jupiter, Saturn, and Venus all in perfect alignment.

Praying that all LI readers have clear skies that night!

Hope to see it when we’re in Cornville for Christmas with the family.

How wonderful it would be if this ‘star’ heralded the coming of the Lion of Judah.

It should guide us out of the leftist hellhole the swamp/left/islamic axis in America is trying to turn our country into.

Remember: Hitler was ELECTED in Germany. He didn’t even have to cheat on the vote. Biden was NOT elected – the swamp/left/islamic axis in America FIXED the vote.

In other words, we Americans were wise enough not to elect a Hitler, but the swamp/left/islamic axis in America saw to it they criminally snuck it in.

We have to realize that our country as we knew it is gone. G-O-N-E.

Fifty years of indoctrinating our children and taking over our schools, our media, and infesting our government with crazy, corrupt people has taken us over the edge. And it could not have happened if we stopped electing rino rats like Boehner, McCain, Romney and the rest of that human trash.

This fake election was the last straw.

Don’t give up hope! At least, not quite yet. Only the cities are blue. After seeing the election “irregularities” in our high density counties, we don’t even know if they truly are are crazy as we think.

The means still exist to maintain/restore a constitutional republic with more integrity and less corruption (hopefully). We should not despair.

For an alternate explanation for the star I would recommend getting on line under Youtube and watching “The Star of Bethlehem” by Rick Larson. He makes a very compelling case based on computer software that actually can recreate the night skies over Israel at that time.

And some astronomers think the Star of Bethlehem was actually a precisely timed comet. A compelling case is here:

I’ll catch it next time.