The experiments may involve CRISPR, which is a gene-splicing technology. 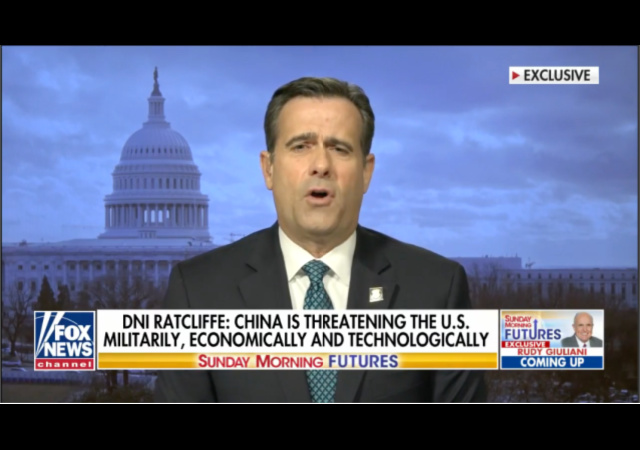 One of my guilty pleasures, movie-wise, is a 1992 film called “Universal Soldier.” The movie’s plot, such as it is, involves two rival soldiers who were killed in Vietnam and brought back to life in an experiment to create superhuman warriors.

Ratcliffe also discussed the national security threat that China poses to the U.S. and intelligence reports that China is altering its soldiers’ DNA during his “Sunday Morning Futures” interview.

“The People’s Republic of China has 2 million strong in its military, and it’s trying to make them stronger through gene editing, and that’s just one of the ways that China is trying to essentially dominate the planet and set the rules and the world order,” he said. “People need to understand this is an authoritarian regime. It doesn’t care about people’s individual rights. We’ve seen what they’ve done to the Uighurs. We’ve seen what they’ve done in Hong Kong. It’s about putting the state first, and that is the exact opposite of what has always made America great.”

Specifically, the scholars explored Chinese research using the gene-editing tool CRISPR, short for “clusters of regularly interspaced short palindromic repeats.” CRISPR has been used to treat genetic diseases and modify plants, but Western scientists consider it unethical to seek to manipulate genes to boost the performance of healthy people.

“While the potential leveraging of CRISPR to increase human capabilities on the future battlefield remains only a hypothetical possibility at the present, there are indications that Chinese military researchers are starting to explore its potential,” wrote the scholars, Elsa Kania, an expert on Chinese defense technology at the Center for a New American Security, and Wilson VornDick, a consultant on China matters and former Navy officer.

“Chinese military scientists and strategists have consistently emphasized that biotechnology could become a ‘new strategic commanding heights of the future Revolution in Military Affairs,'” the scholars wrote, quoting a 2015 article in a military newspaper.

The intelligence is clear: Beijing intends to dominate the U.S. and the rest of the planet economically, militarily and technologically. Many of China’s major public initiatives and prominent companies offer only a layer of camouflage to the activities of the Chinese Communist Party.

I call its approach of economic espionage “rob, replicate and replace.” China robs U.S. companies of their intellectual property, replicates the technology, and then replaces the U.S. firms in the global marketplace.

Take Sinovel. In 2018 a federal jury found the Chinese wind-turbine manufacturer guilty of stealing trade secrets from American Superconductor. Penalties were imposed but the damage was done. The theft resulted in the U.S. company losing more than $1 billion in shareholder value and cutting 700 jobs. Today Sinovel sells wind turbines world-wide as if it built a legitimate business through ingenuity and hard work rather than theft.

The good news is that this will take them generations to get right. The bad news is, many many lives will be destroyed along the way.

Nothing will get done about the threat from China in the near future.

China provided badly needed support for Biden’s campaign, as well as for many other Democrats. Biden’s family is profiting from their deals with China, and he won’t want to rock the boat.

Dems in both the House and Senate have been getting support from China, and in return, they are doing China’s bidding. Here are bills in the House and Senate that were proposed and supported by the Chinese government, which doesn’t like the traditional name “Wuhan flu” because they want to blame the pandemic on the US or Italy. In the House:
https://www.nbcnews.com/news/asian-america/house-passes-resolution-denounce-covid-19-racism-toward-asian-americans-n1240385

In the Senate, it was the Vice-President Elect who was carrying water for the Chinese government, in view for their support:
https://swarajyamag.com/insta/kamala-harris-introduces-resolution-condemning-use-of-racist-phrases-like-wuhan-viruschinese-viruskung-flu

Much like the NBA, the news media won’t tolerate stories that the Chinese government doesn’t like because China threatens to terminate their ability to reach the world’s largest audience.
Here is an example of a reporter who was fired for exposing Chinese corruption:
https://www.npr.org/2020/04/14/828565428/bloomberg-news-killed-investigation-fired-reporter-then-sought-to-silence-his-wi

Soon, I expect that any criticism of China will be labeled “hate speech,” which the Democrats are determined to ban to maintain their political and monetary support from the Chinese government.

One of my guilty pleasures, movie-wise, is a 1992 film called “Universal Soldier.”

For better or for worse, the Chinese care more about winning than about having a “balanced ticket” of politically-correct victims.

Little if any chance of conflict with the ChiComs for at least 4 years. The Harris/Biden regime will be at the beck and call of Xi and his toadies.

The ChiComms will continue bribing the likes of Biden, and the like.

If we tolerate Biden and and Harris being sworn into high office, America will rot to such a point where we won’t have the wherewithal to defend Taiwan, let alone the Philippines, Australia and the like.

The ChiComms will come strolling in. Into America, that is – at least to the extend they already haven’t.

The most damage China could do to the US is to rot it from the inside. It’s succeeded in that, in a massive way. No bullets involved: just dollars.