Disney lays off 32,000 more workers as the House of Mouse continues to struggle with lockdown rules. 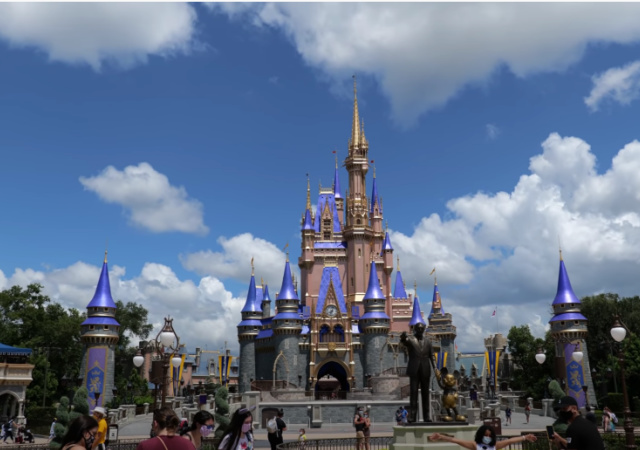 There are more signs that the American public is tired of the endless COVID theater, especially as the mask mandates and lockdowns have failed to stop the new surge.

“We are no longer doing this and continue to expect guests to wear face coverings except when actively eating or drinking while stationary,” said the Orlando, Florida-based amusement park in a statement to WDW News Today.

Disney World had reportedly been digitally “enhancing” on-ride photos by superimposing facewear onto visitors without masks, which park-goers are required to wear, in line with anti-COVID mandates. The policy was initially rolled out on Buzz Lightyear’s Space Ranger Spin at the Magic Kingdom and aboard Dinosaur in Disney’s Animal Kingdom.

The charade came to light after Disney World visitor Tony Townsend posted on-ride photos to the group Disney World Junkies on Facebook, Townsend told The Post. They showed that the masks in the photos were too large for the faces, as if Photoshopped in. Visitors also reported longer wait times for pictures, which some attributed to Disney World staffers editing the snaps, Gizmodo reported.

The photo-editing may have been a move by Disney to get photo-images to customers who were not following park protocol.

A picture taken the DINOSAUR attraction in Animal Kingdom appears to show a rider with a digitally altered face covering. The image was reportedly taken last week.

Since reopening in July Disney states on its website that ‘face coverings are required for all Guests (ages 2 and up) and Cast Members’ as part of their COVID-19 rules.

…Disney had refused to release images where guests were not in masks, according to reports. But they now appears to have changed their policy by digitally altering images instead.

Clearly, the parks are struggling under the COVID lockdowns. Walt Disney Company plans to lay off over 30,000employees, and curtail cruises until well into the 2021 season.

On Thanksgiving Eve, the company revealed around 32,000 workers would lose their jobs in the first half of the 2021 fiscal year. This figure includes 28,000 staffers Disney said in September it would lay off from its parks division.

“Due to the current climate, including COVID-19 impacts, and changing environment in which we are operating, the Company has generated efficiencies in its staffing, including limiting hiring to critical business roles, furloughs and reductions-in-force,” Disney said in a Securities and Exchange Commission filing Wednesday.

The additional layoffs come after Disney executives slammed California officials earlier this month for not allowing Disneyland to reopen, perhaps for months. The California park has been closed since March.

Disney reported a nearly $600 million loss for its fourth quarter.

They missed their protection payments?

You know, I suddenly find myself wondering if I should stock up on high flow Insane Clown Posse face masks? Is that even a thing?

Interesting how this liberal mega-donor doesn’t get the same pass as Say Cost-the-most of Targay.

Yeah, I can see why Disney World would do that. There’s enough Karens out there to stick up their noses and screech at every official unmasked photo they see.

Disney LAND is still shut down due to California’s massive lockdown, despite Disney World’s record so far of not having any Covid cases tracked to them since they started the mask/spacing/disinfecting cycle they’re using now. Considering a visit to Florida in my immediate future. Love the mouse.

Last time I went, a couple or three years before COVID, I found Disney Florida venues, except for Downtown Disney which costs nothing to enter, tired, worn out, and in need of massive refurbishment. Epcot in particular was in a sad state. Future world was more dystopian than hopeful. The parks were not worth the money. Not going back.

In addition, photoshopping reality, a Disney specialty, is disturbing when you do it to real people. Very totalitarianesque, which may not be a word, but should be.

Digital face masks have the same efficaciousness as physical masks, so what’s the fuss? Can’t I identify as a mask-wearer, especially if I add a digital mask to all my photos? I see a golden opportunity for a budding entrepreneur to sell digital face masks…..

Bet photo sales are way down, too.

“Would you like to buy a photo of your ride experience? Yeah, trust me, that’s you, see the t-shirt?”

Wearing a facemask shows loyalty to the party. And it you refuse to wear the symbol of party loyalty…. well, you get what you get.

Disney is just engaged in an act of kindness and generosity to its guests by photo-shopping away criminal evidence of party disloyalty.

So stop complaining. They are trying to save your non-essential butt.

By the way, last time I went to Disney venues in Florida, while they were not quite as dismal as a concentration camp, they were headed in that direction. They need to spend some money to modernize and spruce things up. When I went on the Spaceship Earth ride I think I remember the narration telling me what life in 2011 would be like.

Ironic, but Disney – with its support of the liberal slop in hollywood – has doomed itself to this pain.

Well how effective are masks and closures? Maybe a peek into past history will tell us something.

Citizens were ordered to wear masks, schools, theaters and businesses were shuttered and bodies piled up in makeshift morgues before the virus ended its deadly global march.
——————————-
The Spanish flu pandemic of 1918, the deadliest in history, infected an estimated 500 million people worldwide—about one-third of the planet’s population—and killed an estimated 20 million to 50 million victims, including some 675,000 Americans.

Get rid of the damn masks – along with all the other “Covid” restrictions.

Why would I want to spend 10 hours in Disney World masked?

Perhaps because of the smell?