Yeager became a national celebrity after the publication of “The Right Stuff,” by Tom Wolfe. 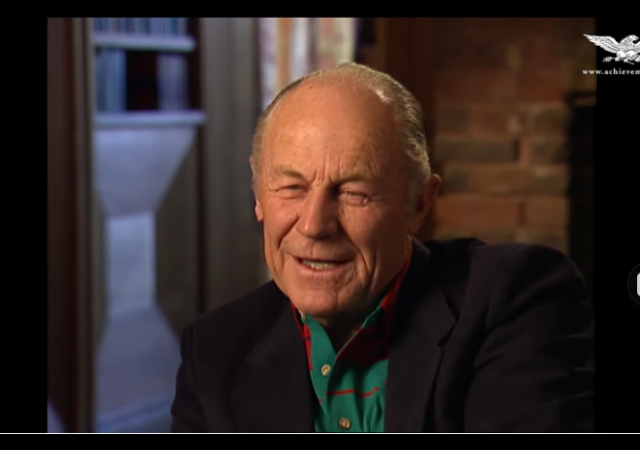 Chuck Yeager, the heroic test pilot who first broke the sound barrier, has died at age 97.

His death was announced on Yeager’s Twitter page by his wife Victoria Yeager.

“It is w/ profound sorrow, I must tell you that my life love General Chuck Yeager passed just before 9pm ET,” she wrote. “An incredible life well lived, America’s greatest Pilot, & a legacy of strength, adventure, & patriotism will be remembered forever.”

Yeager was a flying ace in the Air Force during World War II and later set records that included becoming the first to break the sound barrier, in 1947 over the Mojave Desert.

Fr @VictoriaYeage11 It is w/ profound sorrow, I must tell you that my life love General Chuck Yeager passed just before 9pm ET. An incredible life well lived, America’s greatest Pilot, & a legacy of strength, adventure, & patriotism will be remembered forever.

Yeager began his history-making career in 1941, as an airplane mechanic in the U.S. Army.

After graduating from Hamlin High School in 1941, Yeager enlisted as a private in the U.S. Army Air Forces and became an aircraft mechanic. His unusually keen vision and the United States’ entry into World War II provided his entry to flight training.

While stationed in England, Yeager flew P-51 mustangs but was shot down over France on his eighth mission. He escaped and returned to the air. On Oct. 12, 1944, Yeager downed five enemy aircraft in a single mission and finished the war with 11.5 official victories.

It was during this period that he began naming his planes “Glamorous Glennis,” after his first wife and the mother of Yeager’s four children.

After the war, Yeager remained in the military and became a test pilot at Muroc Army Air Field, now called Edwards Air Force Base. He was selected to fly a rocket-powered Bell XS-1 to research high-speed flight.

While breaking the sound barrier was certainly a legendary achievement, Yeager was also the inspiration behind “The Right Stuff”.

But General Yeager, in the headlines for a time, became a national celebrity only after the publication of “The Right Stuff,” by Tom Wolfe, in 1979 and the movie based on it four years later, in which General Yeager was played by Sam Shepard. In the opening scene, he was depicted breaking the sound barrier.

In his portrayal of the astronauts of NASA’s Mercury program, Mr. Wolfe wrote about the post-World War II test pilot fraternity in California’s desert and its notion that “a man should have the ability to go up in a hurtling piece of machinery and put his hide on the line and then have the moxie, the reflexes, the experience, the coolness to pull it back in the last yawning moment — and then go up again the next day, and the next day, and every next day.”

That quality, understood but unspoken, would entitle a pilot to be part of “the very Brotherhood of the Right Stuff itself.”

What a man; what an American; what a life! They don’t make them like this, anymore.

He’s lucky he grew old enough to die of a ripe old age before he had to witness the bloodshed and chaos our country will soon go through, started by the left, and fully set in motion by William Barr.

His autobiography is pretty funny, he describes having to learn to speak American English instead of the regional vernacular he had been raised with. Having to get a college degree, just to keep up with the younger guys coming in service was quite an adventure, as well.

He actually had a ‘genius’ for flying aircraft. I read about his first instructor’s awe at how intuitive and perfect Chuck’s handling of a stick was.

Of course, when Super-Spreader Kamala Harris read this, she’ll claim bragging rights about her own stick handling.

In 1984, I had the pleasure to listen to him give a talk. What sticks in my mind is his comment “Never let a day go by without trying to have a little fun”. Gen. Yeager was gracious enough to sign my pilot logbook so, in a way, I take him with me when I fly.

What a life well lived by a true American. A true man, not some self-absorbed narcissist who virtue signals to validate their sense of worth. Rather, he was truly virtuous in that he put his life and future on the line for us everytime he went up and fought the Luftwaffe or pushed back the limits of flight.
General Yeager and his comrades in arms are true heroes without whom America would not exist.
That he died on December 7th is somehow very fitting.
On future December 7th’s we will remember those who gave their lives at Pearl Harbor and those like General Yeager who helped us emerge as a free nation.
Godspeed General Yeager.

True story, I met Chuck Yeager around the turn of the century (god, that sounds sooooo long ago) at the Melbourne Airshow and was having a good old chat with him and got a few photos with him.

Anyway…the last question I got to ask him was “mate, I bet the wife couldn’t walk the day after you broke the sound barrier right?” to which the pretty young assistant whipped him away but not before he burst out laughing 🙂

Just how good was Yeager? A simple yardstick was the other pilot in the Bell X-1 program… Bob Hoover. IF Yeager couldn’t have closed the hatch with the stubby broomstick handle, Hoover was next in line. Enjoy “Tea Time with Bob Hoover”

Back when he had to deflect the Twitter cancel mob who thought he was a racist because this documentary said he rejected black astronauts because of their skin color (he didn’t) I sent him a message. I basically said, General, you fought Nazis in WWII, Communists in the Cold War, and now you’re fighting dumb hippies on Twitter. Same old, some old.

People who bow to or participate in any leftist slander of American heroes like Yaeger are people who reject black astronauts because of their skin color.

That said, if Moochelle Obama was around in ’69, she could have been the first stage of the Apollo rocket that lifted our astronauts on their journey to the moon. Or, she could been the moon. If only she’d shut up…

He was one fearless American

Generations of pilots have tried to sound like Chuck Yeager on the radio.

I have the utmost respect for Chuck, who was truly brave and a pioneer in a time when no one really knew what would happen as a result of the experminents being done.

But I do have to make a correction to history.

Chuck wasn’t the first one to break the sound barrier. There were many fighter pilots in WWII who found themselves in high speed dives, and ended up breaking the sound barrier. In each case, it was an individual experience. Some of the pilots lived; some of them died. None of them realized what was happening to them.

Yeager’s accomplishment was to be the first to deliberately break the sound barrier, and to do so under controlled conditions. That doesn’t diminish his accomplishment at all – but, in all fairness, there were other men who learned (in most cases to their demise) what happens when an aircraft goes supersonic.