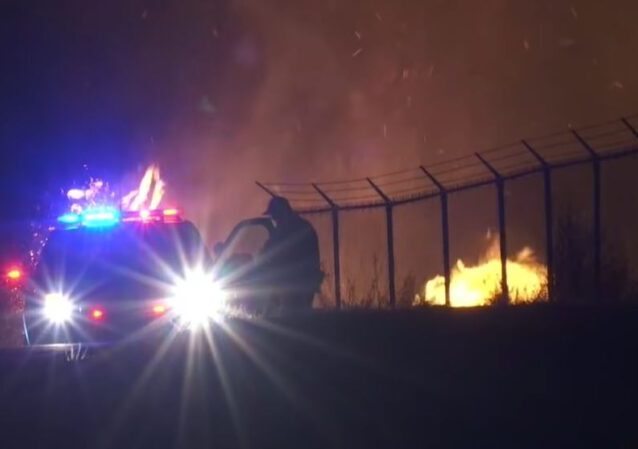 Evacuation orders were issued for about 7,000 residents on the west side of the community of Fallbrook and for some Camp Pendleton locations, the base and the California Department of Forestry and Fire Protection said.

Cal Fire said the wildfire, known as the Creek Fire, is 35% contained and has scorched at least 3,000 acres as of Thursday afternoon.

The fire conditions have been exacerbated by Santa Ana winds, and the terrain around the Marine Corps base.

Another tweet said that the military camp’s “Fallbrook gate is closed to all traffic except for emergency vehicles.”

Because this is California, and our state’s utilities have had to divert funds to green justice programs rather than fire safety, there have been blackouts in the region.

Utilities proactively cut power to thousands of customers in targeted areas to prevent fires from being ignited by downed lines or sparks from wind-blown debris striking electrical equipment.

As of early Thursday, Southern California Edison had shut power off to more than 18,000 customers and was considering cuts to 155,000 others. Almost 6,800 San Diego Gas & Electric customers were blacked out and more than 24,000 others were warned they also might lose power.

Good thing that many of my Christmas lights are solar powered.

Prayers are heading out to the Marines and their families impacted by this fire.

Thinking of our #Marines this Christmas Eve as southern California wildfires have now forced evacuations at Marine Corps Base Camp Pendleton. Be safe, and Semper Fi! @MCIWPendletonCA https://t.co/rdHuXMDtYM

Camp Pendleton has to evacuate personnel during this horrific fire event on Christmas Eve. Anyone know if anyone can offer assistance to Military Personnel over the Holidays? @jaketapper @maddow @PaulRieckhoff https://t.co/4AmlZV9KCy

Do they have a permit?!? No fires without a permit!

Wildfire is a perennial at Camp Pendleton. Probably the Santa Ana winds.

FURTHER PROOF THE DEMOCRATS HAVE GOT THINGS NAILED DOWN TIGHT IN CALI. IT’S SO GREAT THERE NOBODY THERE WANTS TO LEAVE…..EXCEPT PEOPLE WHO LIVE THERE THAT HAVE THE MEANS TO DO SO….I.E. PEOPLE WITH BRAINS WHO’VE FIGURED THINGS OUT….ONE PARTY GOVERNANCE WORKS EVERY TIME….BWHAHAAAHA

Want to turn off caps lock?
.

All caps is rather irritating.

Having lived adjacent to Pendleton for almost 40 years, they have fires about three times a year. Most of these fires are start because of no rain and use of live fire training ops. Throw in some winds and boom you have fire. The entire base is surrounded by a huge fire line. Sometimes it works sometimes it jumps over the firebreak. Most of the bad fires occur in August. I t never made sense to me but it usually was kept under control by the Marines and their fire crews.