Authorities charged her with “picking quarrels and provoking trouble.” 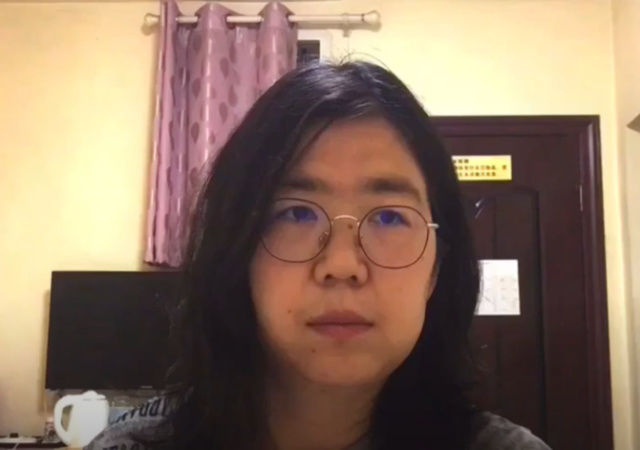 A Chinese court sentenced Zhang Zhan, a former lawyer turned citizen journalist, to four years for “picking quarrels and provoking trouble” due to her reports on COVID-19 in Wuhan.

The charge against Ms. Zhang, “picking quarrels and provoking trouble,” is vaguely defined and has often been used to prosecute activists and dissidents. “Authorities are sending a warning to anyone who dares to cast the government in a bad light,” said Gwen Lee, a China campaigner at Amnesty International, a human-rights watchdog.

During Monday’s trial, Ms. Zhang said she regarded the proceedings against her as illegitimate and refused to answer the prosecution’s questions, according to one of her lawyers, Zhang Keke. She was brought to the courtroom on a wheelchair, likely due to her weakened state stemming from a hunger strike, said Mr. Zhang, who was present at the courtroom on Monday.

The lawyer, who isn’t related to the defendant, said the severity of Ms. Zhang’s punishment may be due in part to her past brushes with the law. Shanghai police issued her a warning in 2018 for allegedly seditious online activity, before detaining her on two occasions the following year for offenses related to picking quarrels and causing public disorder, according to a charge sheet reviewed by The Wall Street Journal.

Zhan went to Wuhan from Shanghai in February to document how the virus impacted the city. 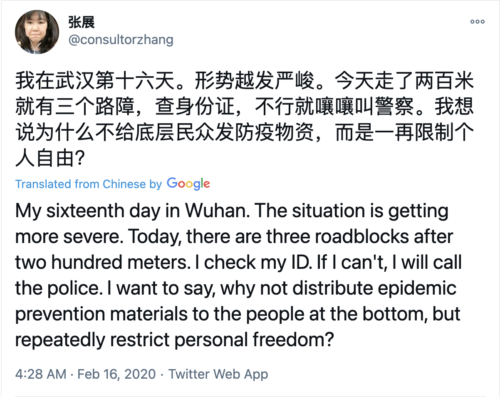 Zhang posted over “120 YouTube videos chronicling conditions in the city and detailed what she saw as missteps in the government’s initial pandemic response.”

The videos included “crowded hospitals and residents worrying about their incomes.”

On May 7th, Zhang wrote, “The party flags and red signs at the gates of many communities indicate that epidemic prevention is not important, and that maintaining the stability of the regime affected by the epidemic is the goal.” 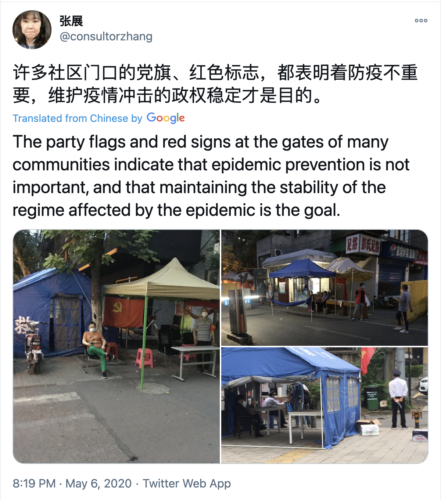 Zhang published her last YouTube video on May 13. She wrote, “The consequences of authoritarian epidemic prevention continue to appear.”

Chinese authorities arrested Zhang seven months ago in Wuhan. They formally indicted her in November.

The Guardian reported two weeks ago that Zhan went on a hunger strike. She had to receive food via a tube:

In a blog post on Wednesday, Zhang’s lawyer, Zhang Keke, said he visited his client on Tuesday afternoon, and found her unwell and exhausted.

“She was wearing thick pyjamas with a girdle around the waist, her left hand pinned in front and right hand pinned behind,” he wrote. “She said she had a stomach tube inserted recently and because she wanted to pull it out, she was restrained.”

Zhang Keke said she was in “constant torment” from 24 hours a day of restraints, and needed assistance to go to the bathroom.

“In addition to headache, dizziness and stomach pain, there was also pain in her mouth and throat. She said this may be inflammation due to the insertion of a gastric tube.”

China has punished whistleblowers over COVID-19 as the regime attempted to shield itself from responsibility for the outbreak.

Sycophant media take note: you will not be spared. Careful what you wish for.

It’s not the ‘sycophant’ media. The former America’s media is in fact Communist China’s media. So are our schools. So are our fraudulently ‘elected’ president and vice-president.

We need to face that reality.

We Americans used to say that our political descent was only about 10 years behind the UK.

Depending on the next month, we might have to change it to “five years behind the UK and 10 years behind China.”

Just look at William Barr. He belongs in the Junta ruling Thailand.

The propaganda machine spent the holiday saying big tech needed to do more to stop any opposing ideas of thought. We are right on the Chicoms heels

According to SCOTUS, we have legal concepts that mean the same thing: “procedural error”, “lack of standing”, “refusal to allow a hearing to review evidence for lack of evidence”.

The new Constitution is has found a way to liberate judges from the chains of personal liberty.

Pasadena Phil: According to SCOTUS, we have legal concepts that mean the same thing: “procedural error”, “lack of standing”, “refusal to allow a hearing to review evidence for lack of evidence”.

Refusing a case for procedural error or lack of standing have been part of common law for centuries. See also Article Three of the United States Constitution, § 2:1.

Hey, what’s with your cultural appropriation using that photo of an Asian man?

We know that can’t be you. Asians are not that dumb.

Authorities charged her with “picking quarrels and provoking trouble.”

The problem with such a statute is its very vagueness means people don’t know to what behavior it might apply. The statute is used by the Chinese authorities to suppress dissent. In the long run, not only does that create a human rights issue, but undermines efforts at reform.

Please reconcile that truth with your defense of the Social Club of The United States evading other portions of Constitution to avoid an obvious violation of law by lower courts. Courts can either be active or passive in undermining rule of law.

alaskabob: Please reconcile that truth with your defense of the Social Club of The United States evading other portions of Constitution to avoid an obvious violation of law by lower courts.

Never heard of the “Social Club of The United States”.

Apparently, you don’t get around.

You probably didn’t get a ‘Willie Brown’ offer from Kamala Harris when she was looking for a job. Everyone else did.

She was charged with, “picking quarrels and provoking trouble”? Is this China’s first day on the internet?

I gnink.we have seen more….Flynn and Page come to mind.

What would be their answer to the question, “What are you afraid of?”
.

You should know that! Truth, the people, loss of power.

This is both similar to and different from the local charges of “hate speech” and racist speech.”

Hate speech and racist speech are just as vague but with no identifiable victim. It is just a status — “You are a bad person who must be destroyed.” The criteria here seems to be power to control for the sake of power to control – sociopathology.

Apparently, China is run by calculating leftists and we have sociopathic leftists. Our leftists (“journalists”, professors, politicians, etc.) would be “disappeared” by the CCP as soon as our leftists utility dropped to zero as they would “provoke trouble” for the rulering class. Our leftists are not smart people. Who knew?

TX-rifraph: This is both similar to and different from the local charges of “hate speech” and racist speech.”

In the U.S., hate speech is protected by the First Amendment. So is the right to criticize people who use hate speech.

TX-rifraph: Hate speech and racist speech are just as vague but with no identifiable victim. It is just a status — “You are a bad person who must be destroyed.”

Shouting the n-word at a black family in public has an identifiable victim.

Shouting “Cracker” to a White family

Why not use that example?

Black families call each other the “N” word every freakin day

Again, protected speech, as is speech which condemns the use of the term.

What a shame. She should have come to America before exposing all this, where big tech and the media merely revokes our 1st amendment/shuts you down/sends up “warnings”/completely bans you from your opinions….then you wouldn’t have gone to jail……..yet.