China plants its flag on moon during recent lunar mission

China plants its flag on moon during recent lunar mission

Meanwhile, the space race heats up as NASA agrees to pay companies to collect moon rocks in future missions 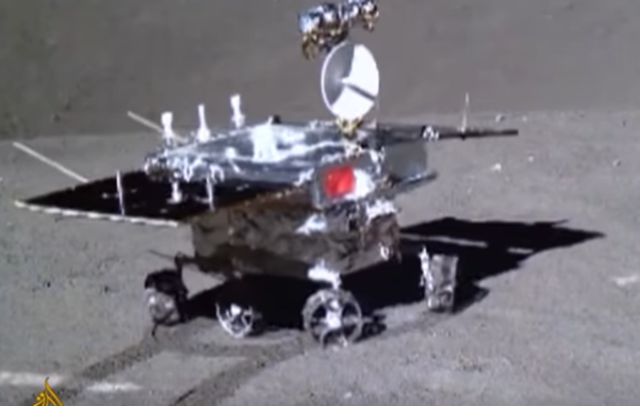 More than 50 years after the American flag was planted on the moon, China’s flag has been unfurled on the lunar surface.

Chang’e 5’s ascent vehicle lifted off Thursday night with a load of lunar rocks, the first stage of its return to Earth, the government space agency reported.

The probe touched down Tuesday on the Sea of Storms for a mission to collect about 4 pounds of rocks and bring them back to Earth, the first return of samples since a Soviet spacecraft did so in 1976.

The lander, which remained on the moon, drilled about 6 feet into the surface and scooped samples — as well as photographed the area and used ground-penetrating radar to check for minerals and water.

Earlier in the week, Chang’e 5 touched down on the Sea of Storms on the moon’s near side to collect about four pounds of lunar rocks and bring them back to Earth.

The landing site is near a formation called the Mons Rumker and may contain rocks billions of years younger than those retrieved earlier.

The ascent vehicle lifted off from the moon shortly after 11 p.m. Beijing time Thursday (1500 GMT) and was due to rendezvous with a return vehicle in lunar orbit, then transfer the samples to a capsule, according to the China National Space Administration. The moon rocks and debris were sealed inside a special canister to avoid contamination.

It wasn’t clear when the linkup would occur. After the transfer, the ascent module would be ejected and the capsule would remain in lunar orbit for about a week, awaiting the optimal time to make the trip back to Earth.

Chinese officials have said the capsule with the samples is due to land on Earth around the middle of the month. Touchdown is planned for the grasslands of Inner Mongolia, where China’s astronauts have made their return in Shenzhou spacecraft.

Meanwhile, in a move to enhance public-private partnerships, a Colorado-based start-up Lunar Outpost won a NASA contract to complete a mission to collect lunar samples.

NASA wants to pay companies for individual collections of lunar regolith, or Moon soil, between 50 grams and 500 grams. The agency explicitly outlined it is only paying companies to collect material and say where NASA can find it on the moon’s surface – not to develop the spacecraft or return the regolith to Earth.

“The companies will collect the samples and then provide us with visual evidence and other data that they’ve been collected, and then ownership will transfer and we will then collect those samples,” NASA acting associate administrator Mike Gold told reporters in a press conference. “The objective [of these collection missions] is twofold: There is important policy and precedent that’s being set, both relative to the utilization of space resources, and the expansion of the public and private partnerships beyond Earth orbit to the moon.”

“China plants its flag on moon during recent lunar mission”

Meh. I contend that an unmanned ship that delivers cargo is not ‘plants its flag’ in any sense of the phrase. But I’ll offer a fortune cookie to the ChiComs for the effort.

notamemberofanyorganizedpolicital in reply to locomotivebreath1901. | December 6, 2020 at 1:58 pm

The Chi-Coms must be registering more illegal aliens as Democrats there.

This is just a propaganda move. It has no real meaning, value, or purpose.

I’mone of those awful nasty evil Americans that didn’t think our planting a flag on the moon was anything of value either. Lots of oohs and ahhs, but, in the end, I didn’t care.

I was in a campground in Linz Austria the night (there) of the moon landing. The owners of the camp-ground set up two color (!) TV sets in picnic shelters so people could watch. I believe I was the only one there that didn’t watch. I just, flat, didn’t care.

One of man’s greatest accomplishments, American all the way. Man always pushes the frontier. With that spirit of exploration comes a bounty of byproducts. You should care.

Voyager (both) did and still do fascinate me. Weather satellites are useful to me. Same with communication satellites until fiber optic rendered them obsolete. The various telescope satellites have excited me greatly. The Mars rover: amazing, and contributed a lot of knowledge,

I just didn’t – and don’t – see what the moon shots accomplished aside from “look what we can do!”, and as a distraction from a war police action that was ripping the country apart.

I suspect Biden will kill NASA as Obama did at the behest of the far left and China.

That picture looks like it was taken in someone’s backyard. Note the cinder block wall in the back and chalk lines on the ground. Don’t the have Photoshop in China?

The lunar lander looks like a peice of crap. Must be made in China

China has done much better, planting its flag not only on AMERICAN soil, but in the White House.

If Biden is sworn in, our entire country will be on its knees. (Kamala Harris just got excited.)

Been there, done that. There and back. 52 years ago. With 3 humans.