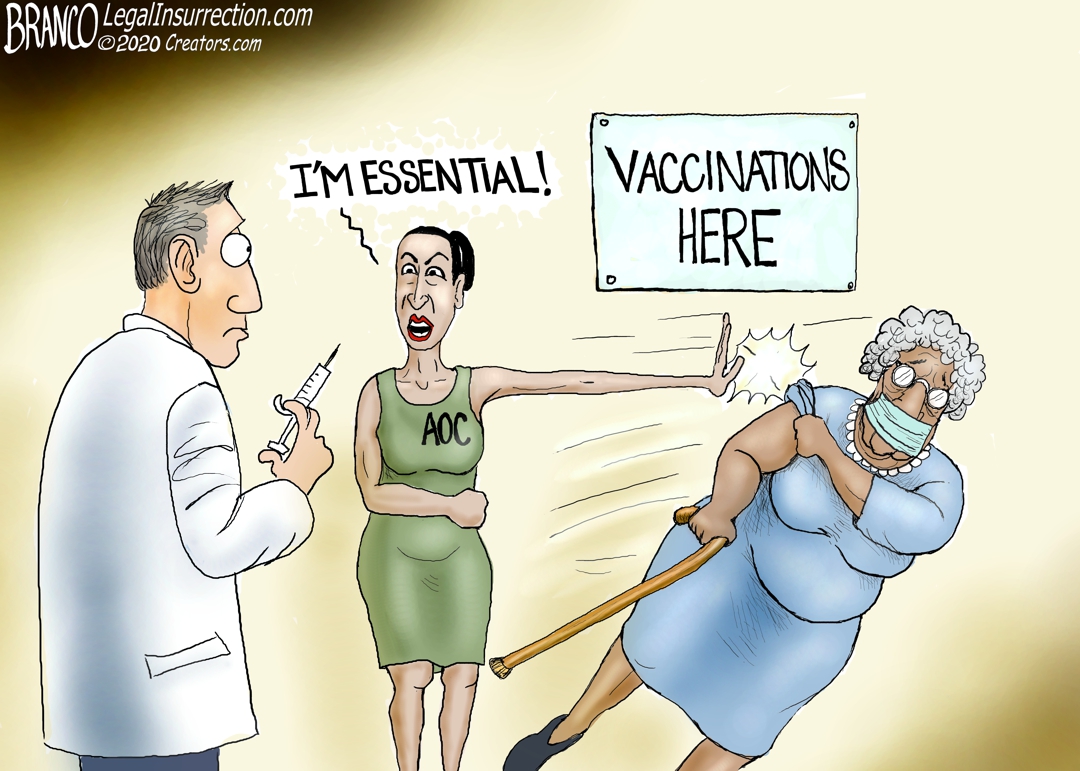 Just tell her that President Trump made her batch personally.

Then she will step back.

The general public is ambivalent about the vaccines, for very good reason. We cannot trust our alleged medical professionals to tell us the truth. Dr. Fauci, for example, just admitted that he has lied to us because he thinks we are too stupid to take real advice.

There are two crucial videos that have been circulating, which are being censored by our social media. One has to do with a nurse who got a shot and fainted 15 minutes later, and another is of a nurse who got Bell’s palsy.

Rumor has it that the nurse who fainted has died. This could be dispelled in a heartbeat by a single televised interview, but it has not. The video of the nurse with Bell’s palsy is simply being censored.

Further, Doctors, clinicians, that have had good results and documented them, are also being censored.

In Europe, the standards for the vaccine testing have been contested because they do not establish efficacy, and the target protein is found on human gametes, raising the possibility of infertility for both men and women, while some States in the US contemplate mandating the vaccine for children.

All of these topics should be the subject of raucous debate, not censorship. The great glory of the American system is that we always do the right thing, as a last resort. We just get there faster than the rest of the world by running through the options more quickly. That happens through having knock-down, drag-out fights over policy.

Our representatives seem to think that their ability to rig elections has also conferred upon them greater wisdom to make decisions for us than they have.

This is what happens when you rely upon the echochamber for information.

Valerie: Rumor has it that the nurse who fainted has died. This could be dispelled in a heartbeat by a single televised interview, but it has not.

“I had a syncopal episode. I have a history of having an overactive vagal response, and so with that if I have pain from anything — hangnail or if I stub my toe — I can just pass out,” Dover told WRCB.

In another clip, she said she has “passed out probably six times in the past six weeks.”

Yes, I was aware of that video when it came out.

You make an ass of yourself when you make assumptions about what other people think and know, instead of asking.

Valerie: you make assumptions about what other people think and know, instead of asking.

We based our statement on what you said.

Valerie: Rumor has it that the nurse who fainted has died. This could be dispelled in a heartbeat by a single televised interview, but it has not. {emphasis added}

Take the vaccine and get back to us.

Who is it that determines what’s essential or what’s free speech and what has to be censored?? I don’t I didn’t give that right to anyone or vote for anyone to do that for me.

That genie is out of the bottle, my friend.

Before the election, the Democrats said they wouldn’t trust a vaccine that was put out under the Trump administration. After the election, there was never another word about trusting the vaccine.

Now that the vaccine is out, all those Dems who wouldn’t trust a Trump vaccine are jumping to the head of the line to get it.