Cardona wants to reopen schools, but that’s where the good stuff ends. 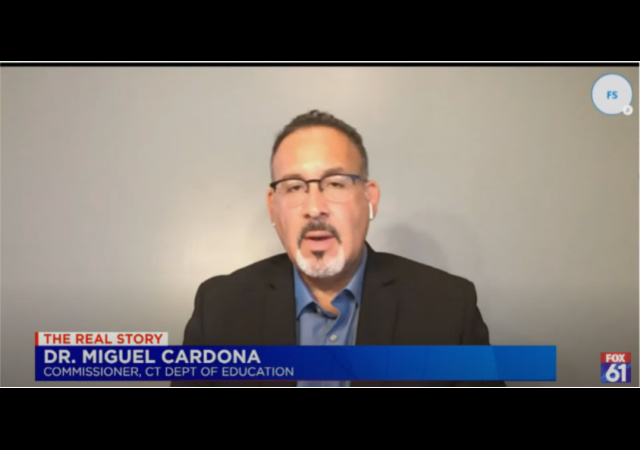 I give Cardona credit for one thing. He has emphasized the importance of in-person school. He wants kids back in schools as soon as possible:

Cardona has argued little evidence exists of COVID-19 transmisison within schools, according to the Hartford Courant, and stressed the social, emotional and educational benefits of in-person classes.

“In-person education is too important for our children to disrupt their education further,” Cardona wrote in a letter to Connecticut school superintendents in November, “unless and until local conditions specifically dictate the need to do so.”

But Biden made it known he wants to undo DeVos’s policies, which include “stricter rules for investigations of sexual misconduct at schools and colleges, plus her looser guidelines benefiting for-profit colleges.”

Cardona also means more emphasis on public schools instead of school choice, but there are limits:

Under Biden and Cardona, the federal government’s support is expected to de-emphasize school choice and embrace an agenda that is “pointedly public-school friendly,” said Amy Jackson, vice president of learning and development at Illuminate Education, a school-improvement group.

That said, Education secretaries are limited in their power over America’s schools education because of the long history of local control in the U.S. Most of the policies and practices in public schools, where about 90% of children receive an education, are determined by school boards, state lawmakers and state departments of education. In fact, as Trump’s education secretary, DeVos failed in many of her efforts to expand school choice options for great swaths of America’s children.

Cardona will face pressure to stick to other promises from Biden. These include tuition-free public college “for families making less than $125,000 annually and restore Obama-era civil rights guidelines that the Trump administration rescinded.”

Biden also “supported legislation to forgive borrowers’ first $10,000 in student loans.” He has not committed to supporting “canceling student debt by administrative fiat,” which the far-left wants to happen.

Biden promised to nominate a teacher for the position. Cardona began his career as a fourth-grade teacher and then became an elementary school principal.

What are his qualifications? Aside, that is, from being blatantly Hispanic?

If Jaime Escalante can do it…so can he? Right?

notamemberofanyorganizedpolicital in reply to The Friendly Grizzly. | December 22, 2020 at 1:30 pm

Of course he would.

How else will they hide truth in plain sight…….

YOU CAN HELP BY CONTACTING YOUR CONGRESSMEN AND WOMEN – LISTS PROVIDED: Just Copy to an Email, Draft Message and Stand Up Against the Democrat Communist Takeover

TheFineReport.com in reply to notamemberofanyorganizedpolicital. | December 22, 2020 at 4:27 pm

As we’ve learned, these ‘communists’ are merely corrupt fascists who line their own pockets at the expense of the middle and lower classes.

Why ae you referencing things that have no relevance to the article? If you are making a point and adding references keep them on topic please.

Being a racist is the most important qualification. He will purge all this evil whiteness from the nation’s educational system. A return to the kangaroo courts so loved by university leftists as well.

And who would Joe Biden’s handlers pick who wouldn’t reverse DeVos’s policies?

In our fantasies, America will return in a generation or two. Forget it: we’re a third world country now with a first rate military, just like the Soviet Union.

Let’s not wait around for coming catastrophe, where it will be too late to negotiate a peaceful divorce. We need to start the discussion.

Of course the schools, and the pipeline of those with the approved qualifications to staff them, are on a downward trend. Rather than trying to bail this boat with a huge hole in the bottom, give people access to lifeboats.

And let the money go with them. It’s not sexy and I didn’t get it immediately when DeVos was appointed and announced that as her direction. But on reflection, it’s the only way. She did the right thing.

The headline is a bit off target. Anyone Biden picked would reverse Devos’s policies. There was never any chance he would pick someone who wouldn’t. The only question is how much and how strongly and how quickly, and what if anything can be done to mitigate the damage.

None of this matters anymore.

It’s over for our nation.

We have to move our own way. Start the practical discussions.

The practical discussion would be the policy involved. Without that you cant really discuss pro/con’s

I think he’s focused more on personnel at the moment.

Just count on every Trump vote, objective, law or executive order to be turned over in any way they can.

The problem is the knuckle draggers still don’t understand how screwed we are.

The knuckle draggers will have nothing to worry about: fascists always need street enforcers or secret police thugs.

The /BrownshirtKnuckle-Dragger Full Employment Act is coming, and it will be official.

Let’s get out while we can.

They don’t care how screwed WE are. They want some of what we’ve got, and Biden’s all about transferring it to them.

Of course they want the Leftist Seminaries to open, can’t indoctrination to work well otherwise

And expect transgender to be a main curriculum

The real question is what does someone in Washington DC have to do with the education of kids in Arizona.