Trump: “This Election Was a Fraud” but “Certainly I Will” Leave If Electoral College Picks Biden

Trump: “This Election Was a Fraud” but “Certainly I Will” Leave If Electoral College Picks Biden

Trump admitted it would “be a very hard thing to concede” if the Electoral College picks Biden because the election “was a fraud.” 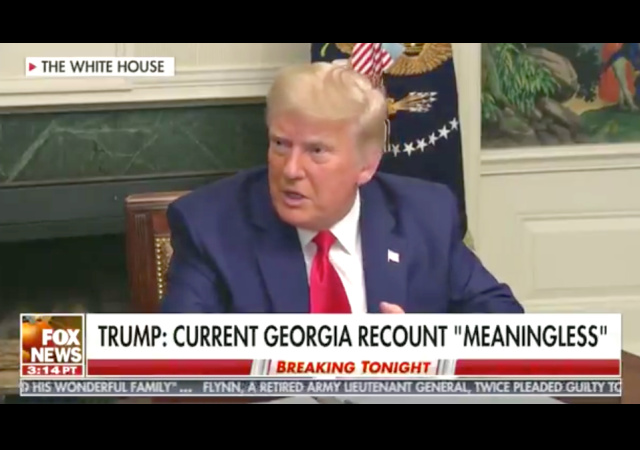 President Donald Trump told reporters he will leave the White House if the Electoral College votes for Joe Biden.

Because, you know, the left seriously thought the Secret Service would have to take Trump out kicking and screaming.

"Certainly, I will. Certainly, I will and you know that."@realDonaldTrump affirms that if the Electoral College elects @JoeBiden as the winner of the election that he will indeed leave the White House. pic.twitter.com/KcvXNHXXcG

Trump admitted it would “be a very hard thing to concede” if the Electoral College picks Biden because the election “was a fraud.”

So even though Trump will leave the White House the reporter continued to push Trump on conceding:

VIDEO – Trump to Reporter: Don’t Ever Talk To Me that Way, I Am the President and You’re Just a Lightweight https://t.co/ldMoecoAkO

REPORTER: “Sir, just to be clear, if the Electoral College votes for Joe Biden, will you concede?”

TRUMP: “Well, if they do, they made a mistake because this election —”

TRUMP: “— was a fraud. Just so you understand, this election was a fraud. They have Biden beating Obama on Obama’s vote in areas that mattered in terms of the election, in swing states. And yet he’s losing to Obama all over the place. But he’s beating Obama in swing states, which are the states that matter for purposes of the election. So no, I can’t say that at all. I think it’s a possibility — they are trying to — look, between you people — don’t talk to me that way. You’re just a lightweight. Don’t talk to me that — don’t talk — I’m the president of the United States, don’t ever talk to the president that way.”

TRUMP: “I’m going to go with another question, go ahead.”

This 2020 fiasco is not an election except in the sense that the Soviets had elections. It is a fraud where the “winner” is picked by the insiders and the voters do not count. Certifications of a fraud are unethical and evil.

Trump is the winner if the ballots are properly counted. If Trump does not remain in office, he is surrendering the USA to the Marxists and the USA as a Constitutional Republic is over. There will never be another legitimate election. Never.

This is the new Revolutionary War. Surrender to King George is what some people did. The Patriots did not surrender their children and grandchildren to tyranny. Shall we?

“If Trump does not remain in office, he is surrendering the USA to the Marxists and the USA as a Constitutional Republic is over. There will never be another legitimate election. Never.”

The sad but inevitable truth

Democrats have been stealing elections for generations. The 1960 election was stolen just as much as this one was.

notamemberofanyorganizedpolicital in reply to maxmillion. | November 27, 2020 at 2:28 pm

Biden can only enter the White House as President if he can prove that his ridiculous “80,000,000 votes” were not fraudulently or illegally obtained. When you see what happened in Detroit, Atlanta, Philadelphia & Milwaukee, massive voter fraud, he’s got a big unsolvable problem

C-Span footage of Joe Biden interacting with girls is being flagged by Twitter for violating their Child Sexual Exploitation Policy after popping up online during an argument about the politician’s character.

Anyone have more on this?

If not for the 1948 voter fraud in Texas, there might never have been a Vietnam war or Great Society that destroyed the black family unit

From what I know of King George III (the papers from his time as king have been released and I’ve seen comments about them) and about Biden and Harris, I think we’d be getting the worse end of that trade.

notamemberofanyorganizedpolicital in reply to TX-rifraph. | November 27, 2020 at 12:01 pm

Sidney Powell With Lou Dobbs: AZ Witness Says Handed Out 35K Votes To Dems. Just To Start It Off!

MarkS in reply to notamemberofanyorganizedpolicital. | November 27, 2020 at 1:08 pm

While entertaining, useless pap until Barr wakes up and takes action

I am hoping that Republican-majority legislatures in PA, MI and one other of AZ, WI or GA refuse to submit to massive election fraud and don’t appoint Biden electors and thus deprive him of 270 electoral college votes, in which case the election goes to the House where President Trump will be declared the victor by 31 to 19.

If this does not happen, however, then President Trump has no choice but to leave the White House.

If Trump leaves, I hope that he continues to lead his followers, and that we can collectively make Dems live in interesting times.

For the Nth time, if a state doesn’t send electors, its count is subtracted from the calculation and Biden no longer needs 270, just whatever the new majority becomes.

Professor Dershowitz disagrees with you. He says if neither candidate gets 270 EV then the election goes to the House.

Well, he’s wrong. There is no room for debate or discussion about this. All you have to do is read the constitution, which Dershowitz seems to have forgotten to do. To win a candidate needs a majority of the electors. It doesn’t say anything about 270. If there are only 499 electors, then a winning vote is 250. So if the disputed states don’t send in any electors, Biden wins.

The vote only goes to the house if there’s a tie, or if a third candidate gets enough votes to deny both major candidates a majority.

The prospect of not having President Trump for the next four years really depresses me. No doubt, the Deep State will be persecuting him and his family personally. If that were to happen, we in the Orange Party (Trump supporters bc we are NOT Republicans necessarily) really have to circle the wagons around President Trump to protect him.

Well, the first thing he should do if he does lose, is pardon himself and everyone associated with him. It will look very bad, but the alternative is worse. Even that won’t protect them from state charges, but at least it will keep the Dem-controlled DOJ off their backs.

I am hoping that Republican-majority legislatures in PA, MI and one other of AZ, WI or GA refuse to submit to massive election fraud and don’t appoint Biden electors

Sigh. This garbage again? The legislatures do not appoint the electors. Ever. They will not be asked to appoint Biden electors, so they will have no opportunity to refuse.

and thus deprive him of 270 electoral college votes, in which case the election goes to the House

More garbage. No, it does not. If those states don’t send in electors then the majority will be less than 270, and Biden will win easily.

notamemberofanyorganizedpolicital in reply to TX-rifraph. | November 27, 2020 at 12:38 pm

This is WAR.- Andrew Breibart.

Let’s hope it won’t be necessary

Given the massive fraud of the Democrats we don’t know how many votes either candidate got. I believe that President Trump got over 80 million votes and that Biden didn’t get 60 million. Prove me wrong.

I can’t prove you wrong, but those numbers don’t seem plausible. I do think it’s likely that Trump won, but not by that much.

Of course there never was a chance of this, it was always Leftists telling you what they would do in Trump’s case.

This is all the big news now, they think they can get Trump out. Maybe they’ll have to kill all the Rep electors, but hey “by any means necessary” they think they have a lever now.

notamemberofanyorganizedpolicital in reply to artichoke. | November 27, 2020 at 11:58 am

This is an epic troll, time to celebrate with some jelly!

It’s about time Trump put the Press in their place

Actually, he should never take live questions, they don’t deserve the time

He should have done that from the beginning.

State the facts where ever we can. The public is a formidable group of witnesses. I would not want to be a politician ignoring their constituents. They may be looking for other employment soon.

I have said it before and I will say it again. The Democrat and Rino politicians are soon going to be running for their lives chased by is their own Democrat constituents.

The problem is that there is a grand conspiracy between most media, most social platforms and Dems / Rinos to stop spread of the truth. It is nearly as bad as Marxist governments.

If the Harris/Biden administration does make it into office, I look forward to four years of legal challenges and other harrassment. Turn about is fair play!

Fair play will not be allowed. The legal challenges and harassment will all be one way. These people are sociopaths who have a long history of crushing counterrevolutionaries. The old rules are purged and replaced with Marxist rules. What Constitution? Oh, we updated that like the side of the barn was updated. Meet the dogs.

Other than Democrat lies and propaganda, there’s no reason to suspect he wouldn’t leave. It’s insulting to ask and he should’ve refused to answer the question.

Electoral College, how quaint. The Electoral Press has ruled.

Trump should never concede and never leave office. The fraud is overwhelmingly evidenced.

Not according to the 3rd Circuit.

Yep…. only the ballots count even if the chain of custody is broken. The Pa Supreme court (5 Dems 2 Rep) ruled that ballots with no signature nor postmark would be counted. Alito ordered votes to be sequestered but Allegheny county counted them anyway. Ballots count…not legal voters. So far. By the way…. how does one convict someone for money laundering when the same prinicples of evidence apply?

The Left and the Elitists want President Trump to concede because that would be equivalent to making him say “uncle.” No candidate needs to concede for the transfer of power or the inauguration of the next president to happen. The demand that President Trump concedes is PURELY for humiliation purposes. #DontConcede

Of course he’ll leave, if he officially loses the election. He’s fighting tooth and nail not to lose, as he should, but in the end if he does he’ll have no choice but to leave. The idea that he wouldn’t was never anything but an absurd paranoid fantasy, and those who entertain or spread it are either insane or dishonest.