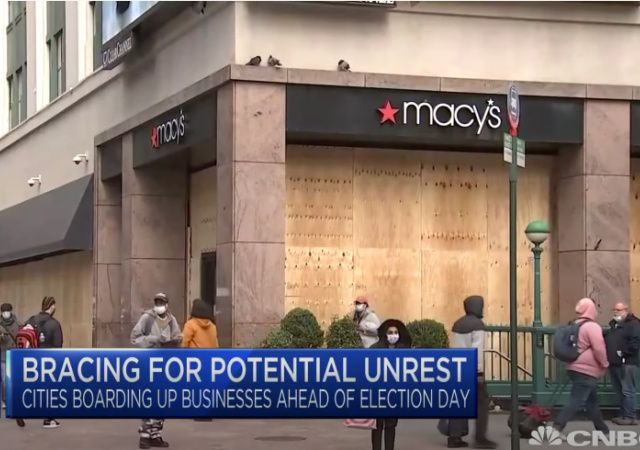 Cities across the country started preparations for possible chaos after Tuesday’s election.

Let’s start with the big one: New York City!

It’s been bedlam in NYC since Mayor Bill de Blasio shut down everything due to the coronavirus and riots after George Floyd’s death in late May.

Shops including Chanel on Spring Street in Soho, Levi’s and Gucci in the neighborhood and others along Greene Street like Dior have taken those precautions.

Also boarded up were chain stores such as Staples, Ann Taylor, and a Bed Bath & Beyond in Chelsea, as well as the iconic Macy’s flagship in Herald Square.

The vice president of the New York-based Sergeants Benevolent Association, Vincent Vallelong, told the Daily Caller News Foundation that he hadn’t seen such disaster preparation in his city since the 9/11 terrorist attacks.

“Stuff like this was done during 9/11 when everybody went to 12-hour tours, but they basically put the whole job on alert right now,” Vallelong said during a phone interview.

“I’d be lying to you if I said I wouldn’t be worried,” he continued. “We’ve already seen cops get assaulted in New York the last time this broke out. This is something not to take lightly right now.”

This is Democrat NYC.

They’re not boarding up in fear of conservative violence. pic.twitter.com/vLTaHVAkS8

I saw pictures of NYC and DC already doing this now add Boston to the list of cities preparing for whatever aftermath may come after the election. Some stores in Downtown Crossing already boarding up. This is a sad and scary time in America. pic.twitter.com/NA8aIBJruu

Businesses boarding up storefronts in NYC ahead of tomorrow’s election. There’s one day left #vote pic.twitter.com/RfdwrCPC6w

ShutdownDC has encouraged voters to “hit the streets” after they vote. Holy hyperbole:

On November 3rd, after you vote, volunteer at the polls or do get out the vote, come to Black Lives Matter Plaza. Thousands of us are planning to come together to defend democracy and ensure that Trump isn’t able to steal the 2020 Presidential Election.

We’re going to start this next phase of the election cycle in the streets. We’ll have GoGo bands, salsa dancers, artists, cultural workers, and much more. We’ll also be watching the election results coming in on big screens. Votes will still be coming in, so this will (probably) not be the time we need to create disruption to stop a coup – yet. But we’ll be in a good place to respond to whatever might happen. This has been a really long and dark era so we’re going to be together to process our feelings of hope, anger, fear and exhaustion as a community.

The organizers said it will end “around midnight so we can be energized and ready to hit the streets again on the 4th.”

D.C. businesses began boarding up windows and entrances a few days ago, especially the area around the BLM plaza.

George Washington University might become a point of interest for rioters:

Ahead of tomorrow’s highly contentious presidential election, George Washington University is urging students “to be prepared for possible election related disruptions” near the campus in Washington, D.C., and to stockpile a week’s supply of food and medication.

The university’s warning went out in an email to students on Thursday and Friday. GW student affairs and residential living officials suggested that students living on or off campus prepare for Election Day “as you normally would for a hurricane or a snowstorm” in case they are prevented from leaving their residences, according to the email. It included tips such as “pick foods that have a long shelf life,” “stock up on over the counter medications” and “be aware of your physical surroundings” starting Tuesday.

“Some may want to celebrate while others may protest,” the email said. It also noted that the results of the 2020 presidential election may not be determined on Nov. 3.

I saw pictures of NYC and DC already doing this now add Boston to the list of cities preparing for whatever aftermath may come after the election. Some stores in Downtown Crossing already boarding up. This is a sad and scary time in America. pic.twitter.com/NA8aIBJruu

Boarding up going on in DC all around Convention Center and Farragut North (pictured) pic.twitter.com/ceX0IKMwuQ

Washington DC businesses and even some homes are boarding up in anticipation of street violence after tomorrow’s presidential election.#Election2020 #VOTE pic.twitter.com/0UUODzSTcu

These guys are busy boarding up windows in downtown DC ahead of Tuesday’s election. They say business has been good for the boarding-up and replacing-windows trade… pic.twitter.com/ZGG5XGUHkq

Washington DC is boarding up shopfronts, preparing for election destruction. This is the 3rd time they’ve done this since June. pic.twitter.com/eQc8lhe30L

Brosnan Risk Consultants executive vice president Eric White said this is the first time in a long time that local businesses have had to think about security after an election.

On and around Clybourn Avenue, the retail corridor on the city’s North Side that has been hit hard by property damage and theft during previous unrest this year, many stores were boarded up as of Monday morning. A few crews were in the area covering up windows.

“I’ve got four more jobs after this one,” Joe Daniels, an employee of Midlothian-based Cook County Board-Up, said as he wrapped up a job on Clybourn.

“We’re headed to the Gold Coast next,” he said. “They’re all worried about the election.”

Meanwhile, Macy’s boarded up its State Street store Friday. The department store said it was adding security measures at several stores “out of an abundance of caution,” but did not say what those measures would include.

Daniels hopes the stores do not remove boards late Tuesday because unrest could potentially hit later this week.

The city will up the police presence around town:

City officials said they will increase police patrols and are prepared to deploy 60 to 300 heavy city vehicles to protect commercial corridors and critical businesses. Police have set up hotlines for businesses and encouraged them to sign up for emergency alerts that can be targeted to specific regions.

Well Chicago downtown is boarding up all the stores anticipating a #Trump victory! Otherwise what other reason or excuse to destroy the City? pic.twitter.com/AIX33JuMsG

All over Michigan Ave and Lincoln Park, #Chicago area businesses are boarding up getting ready for protests and looting. Please stay safe everyone, be peaceful and exercise your right to #VOTE! pic.twitter.com/us9kvMXN8t

Boarding up in Chicago. pic.twitter.com/ReKZmW0Kqx

I don’t disagree with the decision of the business owners to button up.

Nevertheless, the necessity for this action is unacceptable.

Gee. If only there was some type of security force with sufficient legal authority and firepower to quell such mob violence. But that’s just crazy talk!

notamemberofanyorganizedpolicital in reply to locomotivebreath1901. | November 2, 2020 at 3:40 pm

You mean such as the

That have always done so in the past centuries?

Smarter than your a-ver-age bear.

Preparing for peaceful protests by an idea.

They are not digging in because of Trump voters. Trump voters have jobs and schedules to keep. This is for the BUYden supporters that are currently burning cities and cant go to BUYden rallies.

One of pro biden people was adamant that the rioting etc was caused by the divisive and racism stemming from Trump.

Did anyone question him about it? I know you want to keep the peace with a group like that. But if someone says something so idiotic, I’d be compelled to challenge him on it. I wouldn’t be a jerk about it, but I’d have to say something.

I would have put the onus on him by asking him to inform the group how Trump’s divisiveness (throw him this bone) justifies violence against innocent people (and their businesses). He can sputter all he wants about justified outrage, but he can’t excuse the violence when it’s directed against non-government targets. But I’d just be asking him to elucidate, without actually challenging or contesting his initial statement. You know, the kind of question journalists used to ask when they were still actually pretending to be unbiased.

Not necessarily: there was an uptick in leftist and black-on-white violence after Obama won in 2008.

Thurgood Marshall’s quote “now it’s our turn “ came to mind when that happened.

If Biden loses, there will obviously be rioting. If Biden wins, there will be even more rioting because the wind will be at their backs. They will know that no one is coming to stop them, not for four years, likely not for a generation.

Yeah, this supposition is wide of the mark. The recent World Series experience was yet more proof that these people have a limited range of emotional expression that covers both outrage and triumph. Especially when there’s gibs to be gobt.

Night 1: plywood burns.
Day 2: Protective removal of all goods from inside of the stores by concerned residents of the major cities.

NYC is dying from within…. top to bottom.

Something tells me that all this boarding up means they already know what’s up.

Why on Earth is this tolerated?

Speaking of which… Kyle Rittenhouse was ordered extradited Friday by an Illinois judge, then was swiftly transported out of the state within mere minutes, while his attorneys were filing the statutory appeal to which he was entitled. Tonight he is in Wisconsin, which doesn’t allow bail bonds, and needs $2M in cash bail, half to be raised by Monday afternoon. If you can donate, please visit “fightback dot law slash defense-fund”. If you can’t donate, Lin Wood writes, “take a moment to say a prayer for him, and for our country. Some things aren’t quite as tangible, but they mean a great deal.” Thank you.

If Biden wins, there will be no stores to go to, so are they preparing for that?

Question, what do you think the Amazon executives think of this?

Election interference is OK so long as the oligarchs behind it are domestic and not foreign.

We’ll never know since Trump will win in a landslide but I believe these thugs will riot regardless of who wins. For one thing, Trump will still be president until at least another 3 months and they will be demanding he step down. A “will of the people” thing. Also, I really don’t think these commies trust Biden or Harris either so. A “message…communism NOW!!!” thing.

Will someone please, please, please set the record straight and tell us that the real threat comes from white nationalists and that if he wins Donald Trump will be to blame? Am I right?

(Who will they blame if Biden wins?)

Both Wolf and Tater

I’m glad to hear that they are predictably predictable.

Plywood and particle board will not stop them.

What part of all of this is NOT sedition?

Trump is going to win bigly. God is on our side. How do I know?

There could not be a clearer signal.

The Left will burn and loot regardless of who wins.

The question is who do you want to be in charge when it happens
Trump who will finally do something about it
Biden who has been encouraging it and the Left who are sponsoring it $$$ and bailing them out with Leftist DA/judges letting them go free.

San Antonio has not been generally a problem area, especially in the conservative ‘burb where we live—tons of active duty and retired military personnel—but we are battening down and our neighbors are on high alert. The dogs will be going crazy so our veterinarian prescribed some tranquilizers. We are always stocked up on food. The gun safes loaded with ammo and had the fire extinguishers checked.

Hate to sound doom and gloom, but these leftists are batcrap crazy violent.