Absolutely no coincidence this news comes out right after the election. 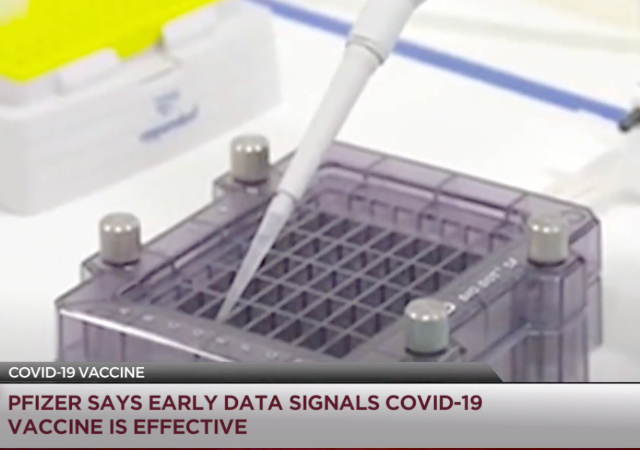 Of course, Pzifer announced less than a week after the election that its COVID-19 vaccine is 90% effective in the latest study.

Pfizer also said it would ask to put the vaccine on the market “if pending data indicate the vaccine is safe.”

You all knew this would happen.

Pfizer claimed the vaccine “demonstrated evidence of efficacy against COVID-19” on Sunday, November 8, 2020.

So the company only found out the evidence yesterday? Weird.

Current projections show 2020 could have 50 million vaccine doses while 2021 could have 1.3 billion.

Pfizer claimed it was never part of the federal government’s Operation Warp Speed, which aimed “to begin delivery of 300 million doses of an FDA authorized, safe and effective vaccine for COVID-19 by the end of the year as part of a broader strategy to accelerate the development, manufacturing, and distribution of COVID-19 vaccines, therapeutics, and diagnostics.”

The federal government also promised a $1.95 billion incentive to the company that gives them 100 million doses after FDA approval.

Pathetic TDS push to say Pfizer vaccine had nothing to do with Operation Warp Speed but in fact OWS guaranteed Pfizer $2 billion. Having that guarantee was huge incentive to develop and get vaccine approved quickly. https://t.co/cYmxwoEUX2

Even if Pfizer never took money from the government it is obviously motivation. Also, don’t deny your participation in Operation Warp Speed when there’s evidence from a July press release:

For context, here is Pfizer’s July press release related to the agreement it worked out with the U.S. government through Operation Warp Speed.https://t.co/YVbA4XFB3P https://t.co/TfhzUSfqRN pic.twitter.com/uCllzhXrb8

It says so at the very beginning:

Pfizer Inc. (NYSE: PFE) and BioNTech SE (Nasdaq: BNTX) today announced the execution of an agreement with the U.S. Department of Health and Human Services and the Department of Defense to meet the U.S. government’s Operation Warp Speed vaccine for COVID-19 in 2021. Under the agreement, the U.S. government will receive 100 million doses of BNT162, the COVID-19 vaccine candidate jointly developed by Pfizer and BioNTecg, after Pfizer successfully manufactures and obtains approval or emergency use authorization from U.S. Food and Drug Administration (FDA).

The CEO stated that Pfizer was “pleased to have signed this important agreement with the U.S. government to supply the initial 100 million doses upon approval as part of our commitment to address the global health threat.”

I see people replying to Jerry’s tweet that it was all about distribution, not research and development.

Um, Pfizer plainly said in July that it is part of Operation Warp Speed. But whatever.

I thought the second the apparatchik give the race to BUYden the Wuhan FLu was over.

notamemberofanyorganizedpolicital in reply to 2smartforlibs. | November 9, 2020 at 8:19 pm

Reports are it was ready for October
but they stonewalled it on purpose.

They must think they can PRICE GOUGE.

Almost as effective as hydroxychloroquine. Nothing here, keep moving: Put your mask on, go back in your house. and shut up.

Prediction. We start getting honest counts on COVID deaths which results in death count dropping by 5x to 10x. From 1000 per day to a hundred or so.
They crank the PCR amplification down to 30 from the current 40. “Cases” drop by similar amount.
All in time for Biden’s inauguration.
Nobel Prize in the works.

Who needs a vaccine for a “virus” with a 98%+ recovery rate and for which there are safe, effective, inexpensive therapeutics?

Not buying it – literally.

There may be some truth in the Conniver’s skepticism: “Which is why, for now, wearing a mask “remains a more potent weapon against the virus than the vaccine. Today’s news does not change this urgent reality.” Biden has said he is open to a national mask mandate, and with his team expected to announce its own virus task force on Monday, this news is certainly an ideal rollout for the president-elect’s more heavy-handed strategy for enforcing mask-wearing and social distancing”.
“Update (0815ET): In a statement that effectively confirmed that this morning’s WSJ leak about the Pfizer vaccine was part of a choreographed rollout by Pfizer to withhold news about the mRNA vaccine candidate’s trial results until a week after the election, Joe Biden and his campaign warned Americans that the battle with COVID-19 isn’t over…yet.” https://www.zerohedge.com/markets/pfizer-biontech-trials-show-covid-19-vaccine-more-90-effective

I wonder how they’re proving this vaccine safe, because all previous mRNA vaccine trials failed due to the distressing habit of such vaccines to trigger autoimmune diseases. The “cure” is literally worse than the disease.

Today’s news does not change this urgent reality

That is an interesting definition of “urgent reality”, considering it’s easily provable that masks don’t work (and CDC published studies in May showing that in the general case of respiratory viruses) against covid-19, because if they did states with mask mandates wouldn’t be having these huge spikes in positive tests.

76 here. T2 diabetes. Moderate hypertension. Stage 3 kidney disease. Moderate cardiomyopathy. Probably some other stuff. Every time I go to the MD, they find something else.

Not interested in any rushed through vaccine. If I get COVID, I get it. If I get it, I either live or die. I have had the flu before.

No need to stop the world for me.

Pfizer. Did they develop the vaccine in that fancy new lab they built in Connecticut? You know the one. The one bill Tom land that they had the city condemn as blight. They put all those people out of their homes. That was the supreme court case about it.

Oh. That’s right. I just remembered. They never did build that lab. They just drove people out of their homes.

How much cash did the executives or board members donate to Buyden or a Buyden related PAC?
Inquiring minds would love to know.

Nothing to worry about it was developed under a Trump admin, it won’t work and they are going to get the shot(s), so says the dem party.

I was thinking the exact same thing as Mary Chastain. Anyone who knows anything about pharmaceutical drugdevelopment knows that the process of compound discovery, animal testing, human clinical trials, regulatory submission and approval, takes years. In this vaccine case, many months — Pfizer’s probably been working on it since March, I’d assume.

So, this data was known, pre-election, I have no doubt. And, concealed, to help dim-witted, corrupt, self-enriching, mendacious, avaricious, dotard-marionette, “Big Guy” Biden.

Uhh, OWS lifted strangulating regulations across the entire industry, not just those that took money.

It’s a moot point. The Communist Party will go to court to block the vaccine and the Federal courts will go along with it (Pfizer will get some taxpayer money under the table in exchange for their silence). Can’t have Trump get credit for a working vaccine!

As long as the first dose is administered after Biden takes office, all is forgiven.

My question is with Pfizer being the first and with a 90% effectiveness, would the vaccine be available to the competition on subcontract for production? Why limit it to 50 million doses in 2021? That’s what they do in the defense contracting business. Everyone competes for the best design then when the winner is selected, everyone else becomes a subcontractor for production.

90% effective- meaning that 90% of the people that get the vaccine don’t get the dreaded covid. So is it 90% effective?

No. The Diamond Princess numbers and other numbers show that 80% or so never get it anyway. Getting it mean having actual symptoms. The body fights it off without help. So, half of the 20% don’t get it if they’re administered the vaccine. So it’s maybe 50% effective. And we know there are now more than the original 9 identified strains. Could it be the vaccine is effective against some of them? Was it te4sted against all of them?

Am I skeptical? Yes.

According to a virologist client of mine, the 90% refers to the percentage of people who were given the vaccine who developed antibodies meaning they were immunized. That is incredibly effective. I would think this significantly lowers the herd immunity hurdle. Fewer people have to get infected to kill the virus since victims become so much harder to find.

First, close Planned Parent. Second, 80 to 90% reduced disease progression with early, low-risk treatments. A large minority, perhaps majority with preexisting or cross-reactive immunity. There are few safe sanctuaries for viral spread. So, 90% of less than 1% with an exotic vaccine.

Is there anybody out there who DOES NOT believe that
BIG PHARMA
BIG FINANCE
BIG MEDIA
BIG MILITARY
Have just (almost) pulled off the biggest Election Fraud in the history of the USA?

“Other pharmaceutical companies such as Moderna, also producing a COVID-19 vaccine, experienced similar insider selling over the summer around vaccine news – where insiders dumped tens of millions of dollars of stock.

“Under the cover of Rule 10b5-1, corporate insiders at some pharmaceutical companies are already running for the exits by dumping their stock, of course, it’s easier to commit to pre-plan sales of stock when you know you can pump the price by simply publishing a press release.”