October Jobs Report: Unemployment Down to 6.9%, Private Sector Employment Up Over 900,000

October Jobs Report: Unemployment Down to 6.9%, Private Sector Employment Up Over 900,000

Will the economy continue to grow? Winter is coming… 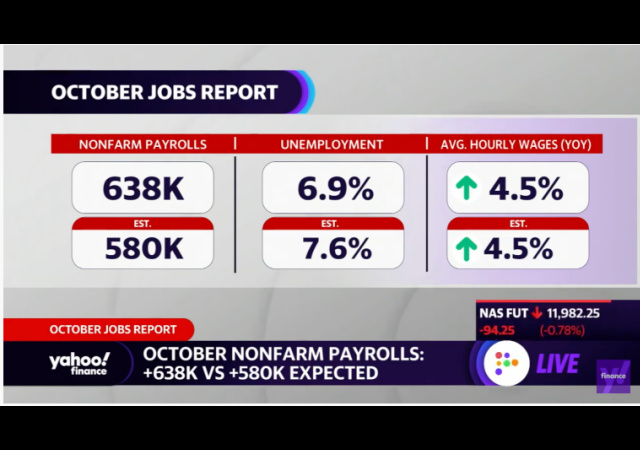 Here are the sectors:

Government employment went down by 268,000, which includes 147,000 temporary Census workers. 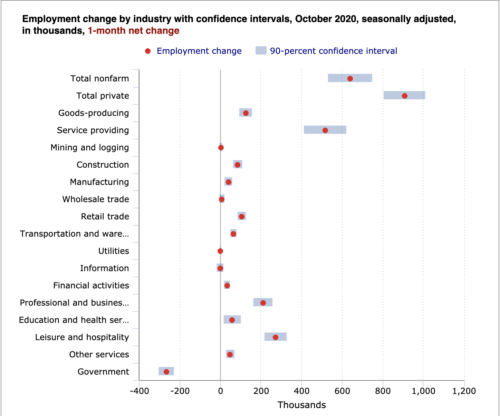 Average hourly earnings went up 4 cents to $29.50. The average workweek stayed the same at 34.8 hours.

The unemployment rates across the board went down in all major worker groups. Other positives:

Will the trend stick around? Probably not because winter is coming:

Winter weather could also hurt industries such as restaurants that have been serving patrons outside. And the looming expiration of emergency jobless benefits could cause consumers to reduce spending, in turn pressuring employers to reduce costs by laying off employees.

Among the hardest hit could be restaurants, which were among the first to rehire but could be the first to lay off people, if the economy deteriorates.

But if the economy continues to grow the MSM will give Joe Biden the credit. That’s funny because when the economy boomed under President Donald Trump it wasn’t because of him. But when it went down due to lockdowns it was all his fault.

When I saw “winter is coming” in the tagline, I thought it was a prediction of a Biden win. That will surely be a dark winter for the economy.

I stopped caring what the U3 number was when the Regime redid the way it was calculated. The U6(12.1) is lower than any time under the regime

“How many jobs did you save or create today?”
Eleventy million!!

That’ll be the headlines next year.

Well, you can be assured that if Biden were to win the presidency then then Harris administration would immediately find every way possible for them to squash the economic recovery. Guaranteed.

And blame it on “hoarders and wreckers”.

So, reduced unemployment, peace in the Middle East, addressing progressive prices under Obamacares, confronting influence peddling (“Water Closet”), standing against social progress (e.g. pedophilia, selective-child, human trafficking), standing up to diversity (e.g. racism) and exclusion, normalizing early, out-patient treatment of the virus formally from Wuhan, confronting leftist environmental and human rights abuses in China (and America), and more. Then, after all, the nation is equally or “=” divided?

That’s nice. Too late to do any good.

Well, that won’t last. One thing Communists do well (apart from genocide) is wrecking the economy of a country.

Too bad we can’t vote them out of office when they screw up. The NeverTrumpers didn’t exactly think things through.