“Well, this is all fascistic crap.” 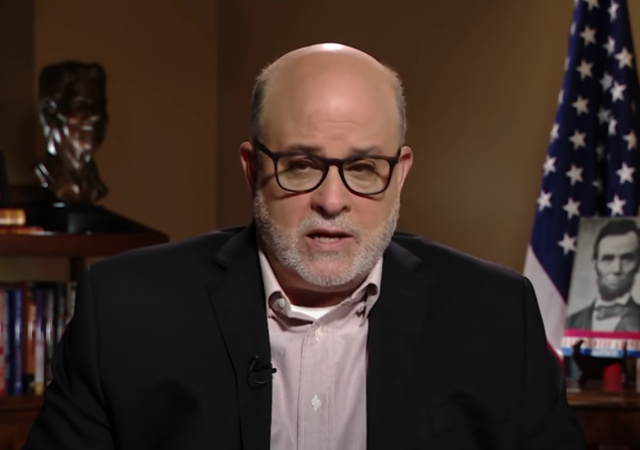 Conservative commentator Mike Levin revealed Facebook censored his page “based on an extremely dishonest Politifact review” of an “accurate story” he posted.

Facebook has now placed severe restrictions on my Facebook page on the eve before the election based on an extremely dishonest Politifact review of my link to an accurate story.  I will not be intimidated or threatened by Facebook. You can also find my posts on Twitter and Parler pic.twitter.com/JFjdpz990c

It looks like the post was about a tweet from Richard Grennell. It included a picture of Joe Biden not wearing a mask on the plane, but the picture was from 2019 before restrictions due to the coronavirus.

Levin admitted the photo is old.

However, Levin pointed out the photo is “now what caused Facebook’s fascism.” This post caused it: 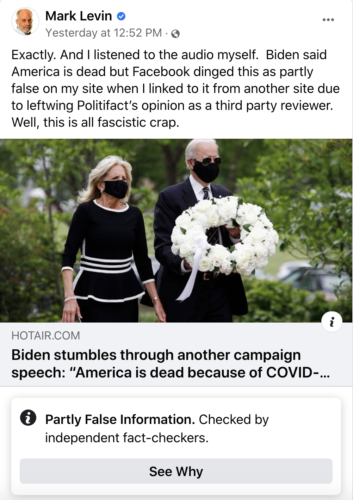 2. But the audio supports what I posted as anyone who listens to it can tell.  It was 100% accurate.  Mediate is a propaganda operation.  A useless site that rips off other content, re-posts it, then spins and twists it to fit their leftwing narrative.https://t.co/k5dmJp6x1m

My message to Facebook and Zuckerberg:
GO TO HELL!https://t.co/Hl52xRgnph

Big Tech has been doing everything it can to protect Biden as the 2020 election approaches.

Big Tech companies recently made headlines for censoring a New York Post article. The shocking revelation released by the Post on Oct. 14, revealed purported emails from Democratic presidential candidate Joe Biden’s son Hunter and reportedly exposed the alleged scandalous dealings of both father and son in the Russia-bordering state of Ukraine.

Facebook responded by reducing the story’s circulation on its platform, crippling its ability to spread. Twitter responded by disabling the link to the story, claiming: “Warning: this link may be unsafe.” Twitter then censored the Post, White House Press Secretary Kayleigh McEnany, the Trump Campaign, and even the House Judiciary (a part of the United States government) for sharing the story.

notamemberofanyorganizedpolicital in reply to Colonel Travis. | November 3, 2020 at 5:40 pm

Break them into a million pieces.

They are nothing but Glorified Yellow Pages.

Facebook has all but shut down Gateway Pundit today.

I heard virtually no pushback on Big Tech from mainstream conservatives like Mark Levin when Alex Jones was deplatformed. They finally got around to you, Levin, and I have no sympathy for you now. You had your chance a long time ago to speak out about this but chose not to because “free markets”.

It goes back farther than that. Those of us who have been around since the beginning (as an idealistic university student, I volunteered with the EFF during the drafting of the CDA) know that every single tactic that has been deployed against Alex Jones and Andrew Torba – the deplatforming by social media, hosting providers, payment processors, banks, DNS registrars, etc., etc. was used, and continues to be used against Stormfront, the (actual) neo-Nazi organization.

And therein lies the problem, doesn’t it? When you cry “Freedom of speech! Freedom of speech! Oh, but not for Nazis” you had best be sure that someone isn’t going to come along and change the definition of “Nazi” on you.

And just so there’s no confusion, although it galls me that I feel I need to explicitly say this: (actual) Nazism is a horrific ideology and Stormfront is a bunch of horrible sociopaths and losers and I fully support the right of any private company to not do business with them for any reason or no reason.

But that same right also applies to targets like Mark Levin, Alex Jones, and Andrew Torba. It has to.

Not if it is a preemptive strike to prevent Levin from disseminating information on post-election, nomination stealing, shenanigans!

As I was saying…

I want to see a gala election tampering suit, with Big Tech as the defendants.
Screw fines, I want to see the CEOs undergo public personal humiliation. Perhaps even some moritification of the flesh. Caning would be aceptable.

I’m a avid Mark Levin listener. This is where we are headed if DJT doesn’t win. The first Amendment is a goner when they start a “hate speech” is forbidden with the Left gets to define what “hate speech” is.
Never understood why a Baker has to make a cake against their belief yet a Leftist mass social media can get away discriminating against a Conservative.

Never understood why a Baker has to make a cake against their belief yet a Leftist mass social media can get away discriminating against a Conservative.

Those “bake the cake, bigot” decisions are blatantly prima facie violations of the First and Fifth Amendment. As bad as Kelo vs. New London. The correct approach is to get those decisions struck down, not go all in on criminalizing the right to freedom of association.

This is great, I remember Mark Levin standing up for Facebook, claiming that they ‘treated him fairly’ and that the company was an honest straight-shooter. How’s it feel now, asshole?

Even conservative media seem to have given Michigan to Biden. Even Steve Bannon is relying on media “calls”. Now on to Arizona the next shiny object, which will be tantalizingly held before us as being possible.

Hell no! We won Michigan and Pennsylvania, as well as probably the other doubtful states. Keep up the pressure over Michigan!